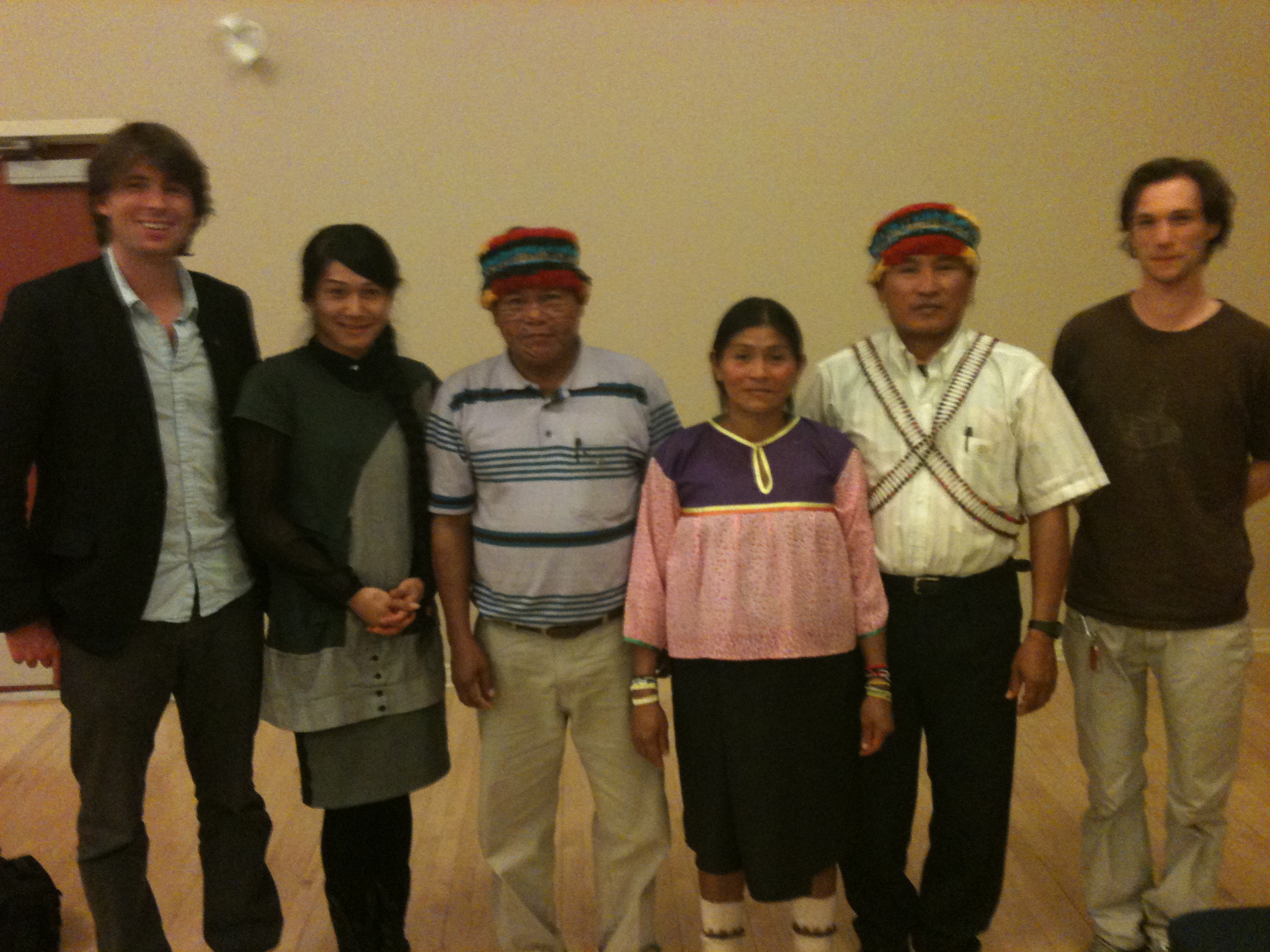 Thank you for the love and friendship you've given us, inviting us into this space, although we might speak different languages, we are all of the same blood and flesh and bones.

Good evening to everyone, I'd like to talk to you a little bit about the video we've just been watching [achuarmovie.org].

Thank you to our allies, to Amazon Watch to Racimos de Ungurahui and other people here who have made it possible for us to be here and share this video.

You've enabled us to come here to work in defence of our territory.

We've been fighting for 17 years, resisting oil companies on our lands.

First of all, the company Oxy, came and tried to work on our lands, but due to the unity of our people we were able to expel them from our lands.

After that came another oil company that we also forced to leave and then came Talisman who's now in our territory, the territory that we depend upon in order to survive.

You've seen in the film, how the company Occident Petroleum in the Corrientes river basin, which is a separate river basin from where we live, has left chaos and contamination in the rivers and left the people with lead poisoning and blood poisoning. That's why we're fighting to defend our lands from oil exploration.

Since Talisman energy continues to work on our land, we've traveled here to send a message to the directors of Talisman about the problems that it's causing on our land and territory.

So also we came here knowing this is the developed country where supposedly the oil companies use the latest technologies, that's why we've gone to visit communities here to see their experience with oil companies, and we've seen it's not true that these technologies can avoid contamination. We don't want contamination and destruction on our land.

So, thank you to our allies who have enabled us to come here so that we can speak directly to the CEO of Talisman to avoid conflict, to avoid a repeat of what happened in Sudan happening in our territory.

That's everything I have to say, but I welcome any questions. For now, a very good evening.

I am here to speak and send a message from the Achuar people, my people.

I'm from Peru and I live in the Amazon rainforest.

My colleague here, my friend, has communicated the problems that we're having with oil development in our country.

So I'm saving in my heart and recording in my brain my experiences here, seeing that the Canadian advanced technology does not serve anything, does not provide anything for the Achuar people. It's useless.

I'm going to talk to my people, I'm going to be a defender of my people's rights so we can live free and live in peace.

Good evening my name is Oscar Gutierrez I've been named by the Achuar people to come here as accompaniment.

In Peru, lives the Inca people who are considered one of the five principal cultures of humanity.

When the Spanish arrived in our country there were between 12 million and 14 million people living there.

Some of the greatest massacres in human history were committed in our territory in South America.

These stories are true.

So in an assembly in the community of Wijint, we were working well, but something in our hearts told us something was wrong

Since there were problems we asked the elders to come discuss and talk to them.

They said the vision of the Achuar people is to live happy and well on their territory.

That's what they said the first thing we need to do is get our entire territory recognized.

Second, we need to get more riches. We need more animals, more fish, more clean rivers, and we also need some money because there is always some necessity for having some money.

That's an example, we don't do things against something else, we do things for life, in favour of life and happiness.

For 17 years now, oil companies have been trying to enter into Achuar land and the Achuar people are saying "No!"

When we spoke to Talisman today, the Achuar explained. Talisman said they want to have a dialogue. The Achuar said, "Dialogue over 17 years is not dialogue." That's harassment.

If somebody has a spiritual gift that's not for yourself that's to share with other people.

The Harakambut people from Peru have the same teaching but in a different way.

Let's for say for example we hear a Harakambut.

I was born with the ability to hunt deer.

Perhaps we can't see the deer but he can see it, and with his arrow he can shoot the deer.

Gregor could perhaps hunt all the deers he wanted but he mustn't do that, he must hunt just one or two, and he mustn't eat them himself, he must share them with other people.

So the lesson is the same, if we are born with this gift we must not use it for ourselves we must share it with other people.