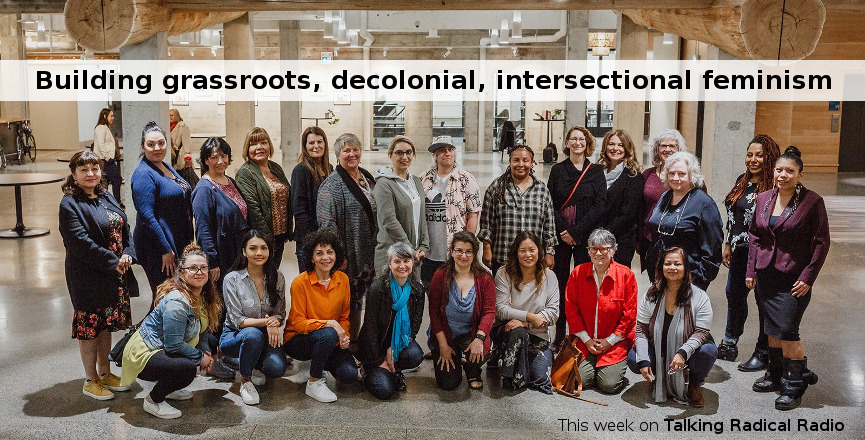 Angela Marie MacDougall is a Vancouver feminist who traces her ancestry to northern Sweden and to Western Africa, and the executive director of Battered Women's Support Services. Jennifer Johnstone is a white settler feminist and the CEO of the Central City Foundation. They are co-founders and co-chairs of Feminists Deliver. Rhiannon Bennett is a Musqueam woman and the decolonization and accountability consultant for Feminists Deliver. Scott Neigh interviews them about their vision for grassroots, decolonial, intersectional feminism and about what they have been doing to turn it into reality.

Women Deliver is an international non-governmental organization focused on gender equality and women's rights. It's a big one – it spent nearly $20 million in 2019, its annual report boasts of many different kinds of activities in many countries, and it partners with governments, big foundations, and big corporations. One of Women Deliver's activities is a massive international conference held every three years. In 2019, supported by lots of money from the Canadian federal government, that conference was scheduled to bring more than 8000 people and 2500 organizations from 169 different countries together in Vancouver.

MacDougall heard that Women Deliver was coming to town, so she investigated. She had some serious concerns about Women Deliver's approach and found very little evidence of effort on their part to substantively involve the vibrant local feminist community in Vancouver, particularly those elements committed to grassroots, decolonial, and intersectional politics. This did not seem right, so she made some efforts to raise her concerns with people organizing and funding the conference. They showed little interest in changing course.

So then, she started talking with other feminists in Vancouver, and many shared her concerns. Some of them got together for an initial meeting, and within a week they had a website, terms of reference, and buy-in from both individual grassroots feminists and a number of the city's important feminist organizations. They called themselves Feminists Deliver.

Bennett and Johnstone were two of the key people MacDougall talked to. Along with the lack of engagement with local women-led organizations, Bennett was particularly disturbed that local Indigenous nations (including her own) and questions of colonization were being treated as peripheral by the Women Deliver conference.

Faced with serious concerns and rapid, effective organizing from a diverse group of local feminists, governments quickly came to the table. They ended up funding Feminists Deliver to hold their own conference at the same time as Women Deliver. With that funding and lots of support from the Central City Foundation, Feminists Deliver put together a four-day conference and trade show highlighting grassroots, decolonial, and intersectional feminisms with a focus on local organizing. The first day happened to coincide with the release of the final report of the National Inquiry into Missing and Murdered Indigenous Women and Girls, which became a major focus of conversation and helped make it a particularly powerful event.

In the wake of their successful conference, Feminists Deliver knew that they wanted to continue working together but they also knew they did not want to found a new standalone organization. Instead, they have continued to collaborate as a sort of coalition.

Much of what they have done in 2020 that has been publically visible has been online public education events focused on things like anti-Asian racism, anti-Black racism in Canada, decolonization in the age of reconciliation, and most recently one called Towards Liberation: Beyond 21st Century Capitalism featuring luminaries like Angela Davis, Pam Palmater, Harsha Walia, and Erica Ifill.

Feminists Deliver has understood the pandemic moment as particularly suited to political education work both because of the way that other kinds of activities have been restricted but also because of the crucial importance of developing a vision for recovery that is something other than a return to the prior oppressive normal.

And much of what they have been up to has not been publically visible at all. Maintaining and strengthening their collaboration has required lots of hard, time consuming work to build relationships, learn from each other, and deepen their politics. As well, they have been busy developing a strategic plan that will guide their activities into 2021 and beyond.