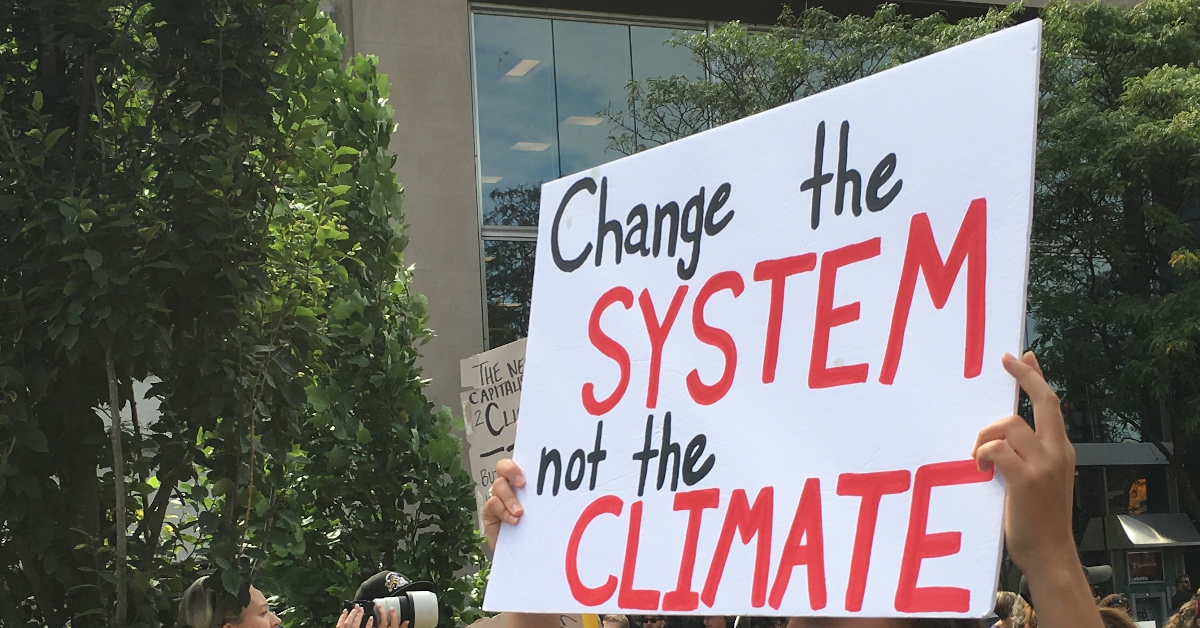 Tara Ehrcke is a teacher in Victoria, BC, and throughout her career she has been active in her union, the British Columbia Teachers Federation. Since 2018, her energies have been largely focused on the climate crisis, and she is part of an informal network of climate-focused trade unionists who organized the recent Labour Climate Forum. Scott Neigh interviews her about the climate crisis, the role that the labour movement could play in addressing it, and the Labour Climate Forum as a step along that path.

One of the central themes in grassroots climate politics in recent years has been the push to recognize that addressing the climate crisis cannot be divorced from struggles for justice. However, being able to articulate those connections is one thing, but it is quite another to do the hard work to build support in movements to shift priorities, goals, and actions on the ground. That work is ongoing not only to integrate justice questions within spaces responding to the climate crisis, but also to bring climate considerations to a lot of justice-focused movements.

Over Ehrcke’s years as a teacher and union activist, she has done a stint as the president of her local, served on the provincial bargaining committee, been on strike three times, and generally spent her time doing the huge amounts of work required to combine participation in the labour movement’s official channels with a commitment to building power through rank-and-file engagement.

In 2018, she read the latest report from the Intergovernmental Panel on Climate Change, the United Nations body responsible for assessing the scientific consensus around the climate crisis. She already had some awareness of climate change, of course, but this really brought home for her the severity of the crisis. She decided to make climate organizing, particularly climate organizing in the context of the labour movement, her priority from that point on.

She and some other teachers in her local started working on these issues in a number of different ways. One important element, for instance, was supporting the youth climate strikes in 2018 and 2019, as well as doing their own work with teachers and with other unions to get them to support the strikes as well.

They have also set out to build more general support for climate justice goals within the labour movement. To do this, they decided against putting too much energy into things like trying to win votes on resolutions at larger labour conventions. In Ehrcke’s experience, environmental resolutions in such venues often fail or get watered down significantly.

Instead, her group decided to join an international formation called Trade Unions for Energy Democracy – a global, multi-sector initiative focused on the interlocking goals of addressing the climate crisis, ensuring democratic control of energy, and enhancing the lives and rights of workers. Then they sought out other British Columbia unions that were also members of that group, and started networking.

An important early step towards concerted, cross-union, climate justice action took place in April – they organized an event they called the Labour Climate Forum, which brought together more than 100 people concerned about the climate crisis from more than 15 different labour organizations in BC. Keynote speakers were John Cartwright, president of the Toronto and York Region Labour Council, who has been doing climate-related work in Ontario; Jane McAlevey, a prominent union organizer and trainer of union organizers from the US; and Sleydo’, also known as Molly Wickham, a matriarch of the Wet’suwet’en people. And there were also a number of workshops.

In Ehrcke’s experience, there are challenges on both sides of bringing workers’ concerns to the climate movement and climate concerns to the labour movement. But she does see things shifting. In part, the willingness of at least some governments to begin putting significant resources into transition-related projects has caught the attention of some union leadership. As well, the growing impact of climate-related extreme weather events has been pushing labour activists to take the crisis seriously.

Moreover, she sees great potential in initiatives that integrate climate justice into workers’ demands, not just in political settings but at the bargaining table. In Canada, the Canadian Union of Postal Workers and their Delivering Community Power initiative is perhaps the best example. She is even more excited by Climate Jobs New York, a coalition of unions, including building trades, that is advancing a set of sweeping demands, in both bargaining and in political contexts, related to the climate crisis, racial justice, and economic inequality. She says, “To see an example where the scale of the demands are at least approaching the scale of the crisis is incredibly inspiring and refreshing.”

Ehrcke argues that mass labour action may be the only grassroots intervention with enough power to win against established fossil fuel interests. She agrees that, yes, getting that to happen is a “big project” but she said that in struggles for social change “there’s often no shortcuts. So it’s just a project we have to take on.”