Corporations in our Heads

Corporations in our Heads 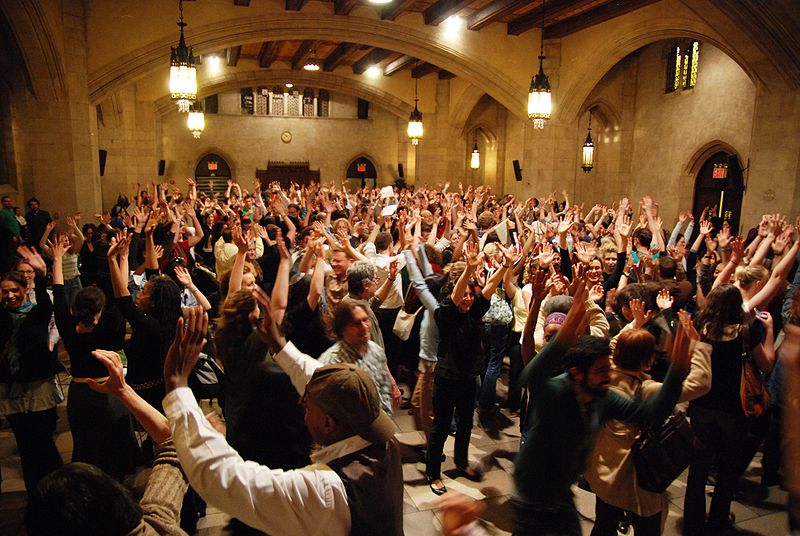 How does Corporations in Our Heads address how corporations define popular notions of success?

It's all in a way theoretical, because we haven't done a lot of them. The reason to do the thing for me is there's a lot of good work happening out there on how the messages of corporations affect our consuming but I don't think we're doing a lot of talking about how those messages affect our own images, not just of ourselves but of our relationships with each other, and it's at the relationship level, in fact, that our consuming originates.

So, if I can just step back for a minute and give some background, Paolo Freire in the Pedagogy of the Oppressed, writes really eloquently about how winning the revolution is the easy part, the hard part is not becoming the very thing we were fighting against, having won the revolution, and we see that happen over and over again. So, why? Why does that happen.

So, more and more, because I know a lot of people doing good work on structural change, my own work is focusing on behavioural change that supports structural change. So, this project - and in the end it will be up to audiences each time in the event because they will determine the stories - but my hope is that we have the courage - in a way - not to look at how to change that thing out there, but how to change ourselves. Because it is through changing ourselves and changing our behaviour that we will change that thing out there. It's harder work.

And so, that's a long answer to your question. What is our image of success? How much money do we need? What kind of places do we need to live in? When we redefine that, then we start to redefine our consumption.

How does TfL and Corporations in Our Heads target certain demographics, specifically university students today in a context of post-secondary education seeing greater corporatized funding?

We have a full time outreach co-ordinator for a reason. Something I end up talking about a lot, is that one must not confuse outreach with publicity. The job of an outreach person and a publicist are very different. And so the reason to have a full time outreach person is to develop actual relationships with people and organizations in lots of different contexts of community. So, in any given main stage project we may have between a hundred and a hundred and fifty organizations from lots of diverse sectors legitimately involved in helping us with a project.

Why do they do that? Because the project serves their mandate. They are actually using the theatre. That's different than deciding to do something and trying to convince people to come see your play, which is the job of a publicist. The job of an outreach coordinator is to build relationships that value and use the work. Does that translate into bums in seats? It does in fact, but it's not the overt purpose. Whereas, for a publicist, the overt purpose is to do marketing campaigns that get bums in seats.

So, we are the first layer of outreach for us with Corporations in Our Heads is we've gone to people who've done training workshops with us, because they're all over the world. There's fourteen years of training workshops now. And so, those people know the work, and they're invested in the work. But something like this can not be organized in a healthy way by an individual and their community, we want them to form committees. So, we're overtly encouraging them to form committees. Though, as committees, you can be comprised of people who are in organizations, activist organizations, working on local issues in their community that tie into this idea.

In a number of instances that involves universities, people in universities, for the very reasons you are talking about [over-influential corporate funding in post-secondary institutions]. So, there are people on those organizing committees that will be bringing their constituencies into the events. Sometimes those events are actually happening in university settings. Lethbridge wants that to happen that way. We're talking to Victoria - because there's going to be a couple of shows in Victoria - about one of them being at a university or college.

Again, it's very possible that this will be held, say, at a university, and a university crowd will come to the event and the story that gets offered and chosen by the room will have nothing to do with university. Because being a university crowd and being held at a university doesn't guarantee that that's the subject matter that will be the most relevant and appropriate in this room full of people tonight. So, the power of it, for me is that it really is a democratic thing that while we are framing the general subject matter, Corporations in Our Heads, the actual content really is going to be determined by the people who enter the room that night. And nobody, not me, not the sponsoring groups, nobody, are going to be able to predetermine the content.

I think that's a matter of opinion. I've seen my CSIS file. I've held it in my hand, most of it was blacked out. I know why I got it, it was early on - 1983 - we weren't doing anything illegal. We were making a play and touring it across the country about Canada's support of the [Ferdinand] Marcos dictatorship in the Philippines, and how US military policy was affecting our foreign policy, and that play got me into trouble. Was I breaking the law? No. That file got really deepened when we were doing "NO'XYA': Our Footprints" and I was collaborating really closely with the Gitxan Wet'Swet'En hereditary chiefs, and they were all under surveillance. And at that point in time, my mail was being opened, all kinds of stuff was going on. That's not happening now.

I can't remember when this was, somewhere around 2000, we did a project with Federal Department of Justice money we put cameras in the hands of street youth here and put the bank of a police department under surveillance, secretly, with Department of Justice money. This really pissed the police off. Was that illegal? I don't know. So, you know, I actually try not to have the company break the law, you know, I'm not sure that helps anything.

The short answer is no. Do we break rules all the time? All the time. Do you stretch the rules, break the rules, all the time, and in the theatre in particular. The rules of the Theatre of the Oppressed, I've thrown them right out the window. With all due respect to Augusto Boal, it's really easy for a visionary's ideas that are really valuable, and that people gather around, to become dogma. And, I don't think Augusto ever intended his work to become dogma. I think making it that is actually really disrespectful. I see his work being dogmatized by many many people around the world.

So, my own shift, it's the reason I don't call it Theatre for the Oppressed anymore, is because I had to really throw a lot of his rules out the window. I couldn't work with them, and have come to believe that that model, that binary model really is part of our problem. It's not part of any solution that I can see.

There's a philosophical shift that has happened that is very popular in some areas and very unpopular with the extreme left, but this idea that I'd suggested, even the most deeply oppressed people I know, and I work with really oppressed communities, are also oppressors. And vice versa. The guy in the suit who has a lot of money, may very well be a valuable ally and when we judge him or her by their bank account and the way they dress, we defeat ourselves.

I ran a workshop just a couple weeks ago, with human rights activists and CEOs of mining companies from all over North America, investigating ways to actually take steps towards sustainable mining, in a true sense. Well, if you believe that the mining CEOs are just assholes, and the enemy, you have no way to move, you have no way to create real change other than to say, "We should stop all mining." Well, look around the world, I don't think we actually want to do that. We're only being able to communicate with each other right now because of mining - all the circuitries in these computers.

It's the difference between working against the world we don't want and deciding to work towards the world we do want. I got really tired of being in negative reaction mode.

NOTE: This podcast was produced in partnership with AlternativeMediaYYC.com and the Arusha Centre with the Calgary Working Group initiative to establish a new local of The Media Co-op in Calgary