Fighting racism at an Alberta university

Fighting racism at an Alberta university 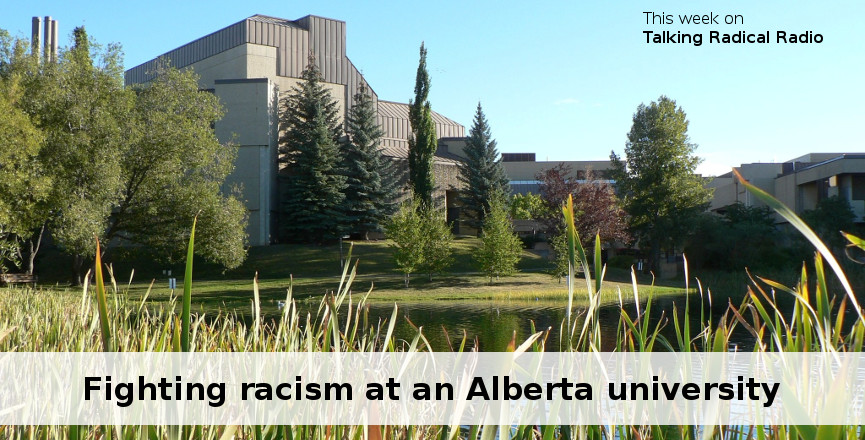 Renae Watchman, Michael Truscello, and Leah Hamilton are faculty at Mount Royal University, a small undergraduate institution in Calgary. They are also members of the Mount Royal Anti-Racism Coalition, a group of faculty dedicated to a wide range of anti-racist work on and beyond campus. Scott Neigh interviews them about what racism looks like in the academy, and about what it means to oppose it.

This year's continent-wide anti-racist uprising has seen heightened attention to racism, and resistance to it, in a wide range of contexts. More people than ever before who do not themselves experience racism have been forced to confront the reality that every system, every institution, every community on this continent is shaped by racism that is deeply rooted and systemic. Universities are no exception to this.

Renae Watchman was hired at Mount Royal University in 2010, where she is an associate professor in English and Indigenous Studies. Coming from a large research-focused university in the United States, it was quite a change for her, but there was lots about it that she experienced as welcoming and positive. As an Indigenous woman, however, it soon became clear to her that Mount Royal also has what she describes as "an unspoken climate of anti-Indigenous racism."

Along with the inevitable racist microaggressions, there would occasionally be some sort of acute racist incident, like racist vandalism on university property or an openly racist event hosted on campus. Meanwhile, the systemic ways that racism shows up on many campuses were also very much present at Mount Royal – for instance, a significant underrepresentation of Black, Indigenous, and people of colour (or BIPOC) faculty and staff, maintained by the aforementioned climate of racism and by a range of policies, procedures, and practices that remain stubbornly resistant to change.

As is true at many universities, there was a sort of informal network of BIPOC faculty and white allies who would do what they could to push back against all of this. Along with responding to incidents as they arose, many of them also do teaching and scholarly work that is anti-racist in some way, and many had put in a lot of hours beyond the already long hours required by their jobs to put together anti-racist programming or educational activities for the campus. In late 2019, they started to have conversations about changing how they approached this work. They decided that they wanted to find ways to do it that were pro-active rather that reactive, and that were a bit more strategic and deliberate, so they formed the Mount Royal Anti-Racism Coalition

The coalition went public in May of 2020 – so just after the pandemic had completely up-ended how universities work. This has meant that some of their vision of teach-ins and activist events and so on had to be put on hold. But, still, they have been busy. They have held online events. They have spoken up in support of the student groups that have formed and been mobilizing around anti-racist demands in the context of the broader uprising. Members of the coalition participated in the Scholar Strike Canada event, in which academics across the country who are sympathetic to the uprising paused their teaching and administrative duties on September 9 and 10 and focused on online public education work related to police brutality and racism.

Another key area of work for the coalition has been pushing for change within university policies, committees, and governance systems. It is opaque and often incomprehensible work to those outside the institution, and the specifics are not necessarily something today's interview participants can talk about freely, but it can be an important way to push the institution in anti-racist directions.

And all of this is happening in a larger context. The coalition recognizes that racism cannot be solved within a single institution, and they are keen to be involved in broader action as well. But that larger context also shapes the possibilities and barriers for acting close to home. One part of that context for the coalition is the hard-right provincial government in Alberta, which not only has no shortage of ties to far-right and openly racist figures but has unleased a wave of austerity on universities that, unless it can be stopped, will transform the sector in very negative ways, including by placing major barriers in the way of anti-racist organizational change initiatives.

Image: Mount Royal University from across the pond / Wikipedia