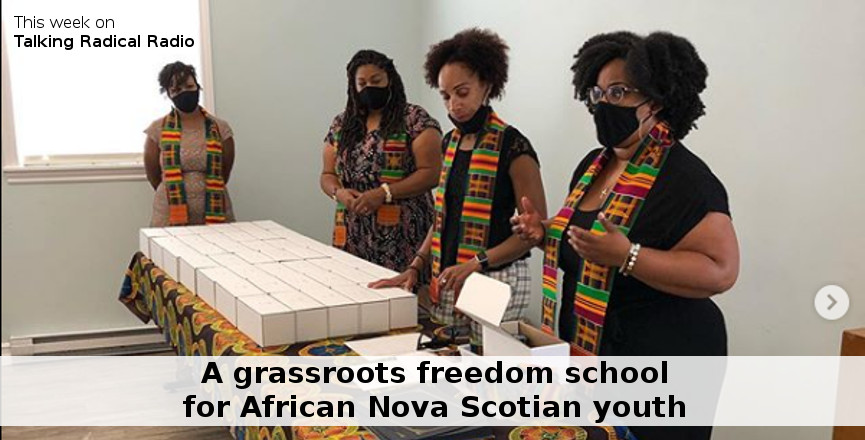 Rachel Zellars is an African-American academic, lawyer, and community organizer who has lived in Canada for more than a decade and a half, and in Halifax for the last couple of years. Wendie Wilson is an African Nova Scotian teacher, artist, writer, and community advocate whose family has been in the province for at least eight generations. Scott Neigh interviews them about the African Nova Scotian Freedom School that they were part of organizing this past summer.

There have been people of African descent living in Nova Scotia for more than 400 years. The long histories of the province's many deeply-rooted Black communities are bound up with histories of slavery and with past and present realities of anti-Black racism, but also with histories just as long and deep of survival, resistance, and thriving.

As was the case in a number of jurisdictions across North America, one element of that history was segregated schools. Black children and youth were not allowed to go to the same schools as white kids, and Black schools were much more poorly resourced. Considering this disparity, Black communities and Black teachers were pretty successful in making sure that that their kids got a good education, but it was still a major injustice.

The formal end of segregated schooling in the mid 20th century was nominally meant to address that injustice, but it is actually a lot more complicated than that. The end of the old separate-and-unequal system also meant that Black students were no longer learning primarily with other Black students and from Black teachers. Their schools had been nurturing and supportive Black spaces, where Black students were seen as whole human beings with potential, in a hostile anti-Black world. Integrated schools in Nova Scotia were not just predominantly non-Black, but often profoundly and systemically anti-Black, with all of the surveillance, policing, dehumanization, and discrimination that entails. As one of today's participants put it, "our education system is a site of violence for many, many, many Black children."

One response to this reality that began in the US in the 1960s, in the context of the civil rights movement phase of the long Black freedom struggle, was what were called "freedom schools." These were grassroots educational spaces created by Black educators and activists where Black children and youth could learn about their history, about themselves and their communities, and about leadership and activism, and where they could be supported and nurtured. In the era of Black Lives Matter, freedom schools have once again been appearing in comunities across North America.

Though Zellars was relatively new to the community, as an educator and a mother of teens herself she realized that a freedom school in Nova Scotia could be a powerful contribution. They didn't know each other, but she had heard of Wilson, and she gave her a call.

According to what they saw during the course of it and what they have heard from the young people and their parents since, the African Nova Scotian Freedom School was a great success. They plan to stay connected with the participants and to host another freedom school next year. And for Wilson in particular, this is one small part of a larger, long-standing vision in the community being lead by an organization called the Africentric Learning Institute to eventually open an Africentric school in Nova Scotia.