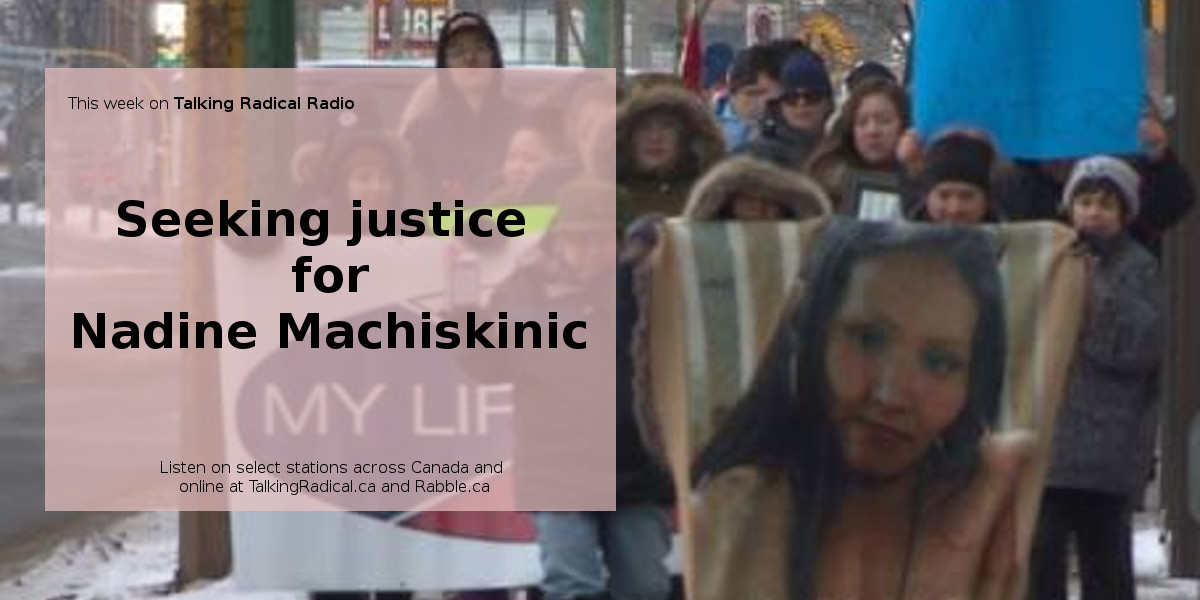 On this week's episode of Talking Radical Radio, Scott Neigh speaks with Delores Stevenson. Her niece, Nadine Machiskinic, died on January 10, 2015. Since that day, Stevenson and other members of the family have been pushing for a proper investigation and for some kind of justice -- in the last year, with the formal support of a coalition of groups and individuals called Justice for Nadine.

When Nadine was found unconscious in the laundry room of a hotel in Regina, Saskatchewan, hotel staff did not notify the police. When Nadine died in hospital a couple of hours later, still nobody notified the police. It was only 60 hours after she was originally found that someone -- a coroner -- decided that the death under mysterious circumstances of an Indigenous woman who had experienced physical injury warranted police attention.

While the investigation that began at that point produced an official conclusion that Nadine's death involved no foul play, the family and many in the community are highly skeptical of this conclusion. Her death was caused by falling 10 stories down a laundry chute, but how she got into the laundry chute to begin with has never been adequately explained. Nor have the details of who she had been with on the 10th floor, or what role they might have played in her death. The investigation was marked by delays, errors, and contradictions, and left the family with an overarching sense that authorities were not taking it seriously.

Though Delores Stevenson is Nadine's aunt, they were close in age and had a relationship more like sisters. During the active investigation, she persistently sought answers from the police and the coroner, and because of their reluctance to provide answers she frequently had little choice but to take her questions to the media. Though she still does not have all of the answers that she wants, and certainly has not found the justice that Nadine deserves, the persistence of Stevenson and of Justice for Nadine, and their hard work to keep the case in the public eye through events and media work, have definitely had an impact. Their persistence played a role in unearthing the fact that toxicology samples were not sent for analysis until many months after they should have been, for instance, and the fact that two very contradictory autopsy reports were issued. Already the case has resulted in a provincial review of the coroner's office in Saskatchewan, and Nadine's death will be subject to a formal coroner's inquest in March. Currently, Stevenson and Justice for Nadine are raising money with the crowdfunding site GoFundMe so that the family can be represented by a lawyer at the inquest.

Stevenson talks with me about Nadine, about the case, about the broader issue of missing and murdered Indigenous women, and about the hard work of trying to find some justice for Nadine.

For more information about the case and about Justice for Nadine, go here. To help the family hire a lawyer for the coroner's inquest, go here.

Talking Radical Radio brings you grassroots voices from across Canada. We give you the chance to hear many different people that are facing many different struggles talk about what they do, why they do it, and how they do it, in the belief that such listening is a crucial step in strengthening all of our efforts to change the world. To learn more about the show check out its website here. You can also follow us on Facebook or Twitter, or contact scottneigh@talkingradical.ca to join our weekly email update list.

Talking Radical Radio is brought to you by Scott Neigh, a writer, media producer, and activist based in Hamilton (formerly Sudbury), Ontario, and the author of two books examining Canadian history through the stories of activists.

The image that was modified for use in this post was taken from the Justice for Nadine Facebook page and is used with permission.