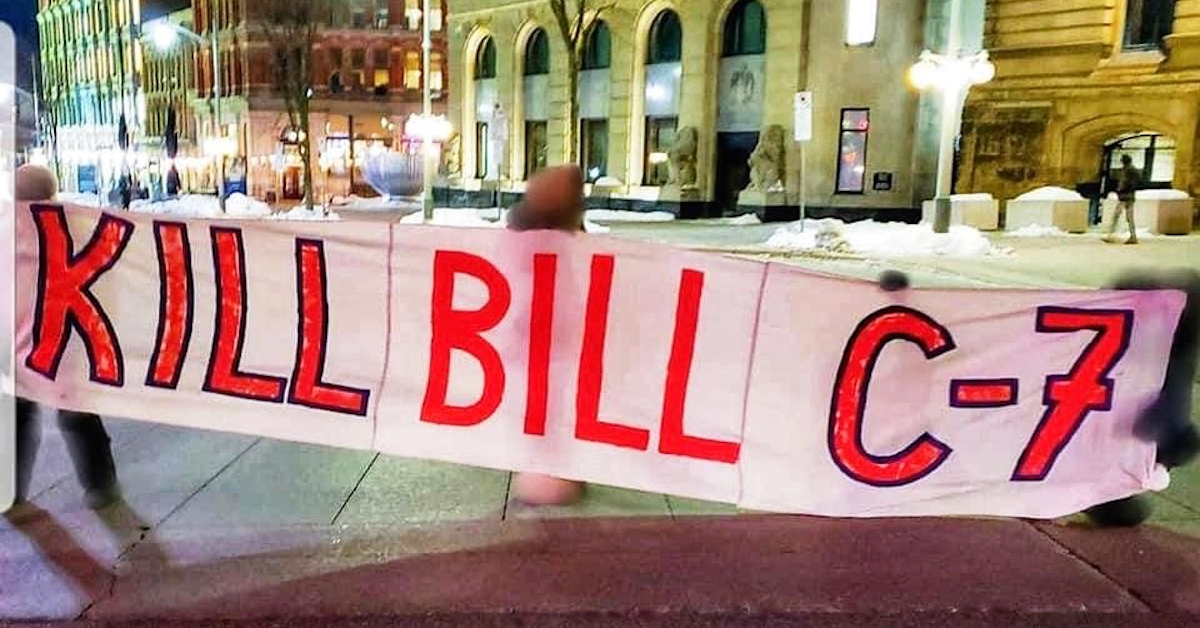 Catherine Frazee and Quin Lawrence are activists and organizers who have been involved in many issues, but they are particularly focused on disability issues. They were part of the upswell of opposition to Bill C-7, which expanded the eligibility for medical assistance in dying in Canada. In the week before the legislation passed, that opposition culminated in an action called the Disability Filibuster. Scott Neigh interviews them about why they saw Bill C-7 as not just ableist but also as a form of eugenics, about the Disability Filibuster, and about their vision for continuing the struggle now.

In 2019, the Superior Court of Quebec ruled that language in Canada’s medical assistance in dying legislation that limited eligibility to people who were already close to death was unconstitutional. Rather than appealing this decision to the Supreme Court, the federal government proposed and, in March 2021, ultimately passed what was called Bill C-7. Under the new eligibility criteria in that legislation, medical assistance in dying is now also open to people who are not near death but who have a serious and incurable illness, disease, or disability, who are in an advanced state of irreversible decline in capability, and who experience enduring and intolerable suffering, either physical or psychological. In other words, certain disabled people.

Judging by initial mainstream reporting on the issue, opposition to this legislation seemed to be limited to certain faith-based and right-wing constituencies that for the most part oppose medical assistance in dying as a whole. Support, on the other hand, was quite broad, and seemed to include a strong progressive consensus.

All of that changed, however, as disability justice activists and many other disabled people challenged this framing and voiced grave concerns with Bill C-7.

They argued that understanding what this legislation will actually do has to start from a recognition of the deeply ableist character of Canadian society. Disabled people face all kinds of systemic barriers, harms, and indignities, and are prevented from accessing a wide range of spaces, supports, opportunities, and resources that non-disabled people take for granted. This, in turn, restricts their survival and thriving, and increases their suffering. This is, of course, intensified at all of the intersections with other axes of oppression like white supremacy, settler colonialism, patriarchy, heterosexism, and so on. Moreover, activists have to fight tooth and nail for even small wins against systemic ableism, and their efforts are almost always met with indifference or active refusal at all levels of government.

Catherine Frazee is a white lesbian disabled settler and a retired professor of disability studies. Quin Lawrence, who also goes by Q and uses they/them or it pronouns, is a community organizer and cultural worker. Both are part of a network of disability activists who worked in lots of ways to oppose the bill.

As the final vote approached and it seemed clear that it would pass – and given that COVID made an in-person demonstration inadvisable – they organized what they called the Disability Filibuster. It was a sort of long-duration livestream where a broad cross-section of disabled people from across Canada and beyond talked about their lives, their issues, and the legislation. According to Q, it became a space for “education and grief and joy.” And Frazee said it was “deliberately kept gritty,” as disabled people refused to tone down their realities, their rage, or their politics. They knew it wouldn’t stop Bill C-7, but they felt it was important to show vocal and principled opposition right to the end.

Frazee explained that not only do proponents of the expanded eligibility celebrate the passage of Bill C-7 as a “great victory” but, she said, “they celebrate it as a human rights victory, and a victory for people with disabilities, as if they were speaking for us. And that really is why we felt, with the filibuster, that enough is enough, we shall speak for ourselves. You will pass this bill, but you will not be able to claim that you did it for us.”

In the aftermath, the group has continued to work together. They have debriefed the defeat, and done a couple of subsequent broadcasts. They are busily figuring out how to build ways for disabled people to support each other, and how to continue to oppose the recently passed eugenic measures as well as other aspects of systemic ableism.

During the struggle against C-7, they found that non-disabled people with broadly left politics were much less supportive than they had hoped, and they also want to address that as they move forward. Frazee laments, “Ableist impulses are also found at the heart of the left… We really have to root these out in order to be a truly inclusive and progressive social movement.”

Image: From the Disability Justice Network of Ontario