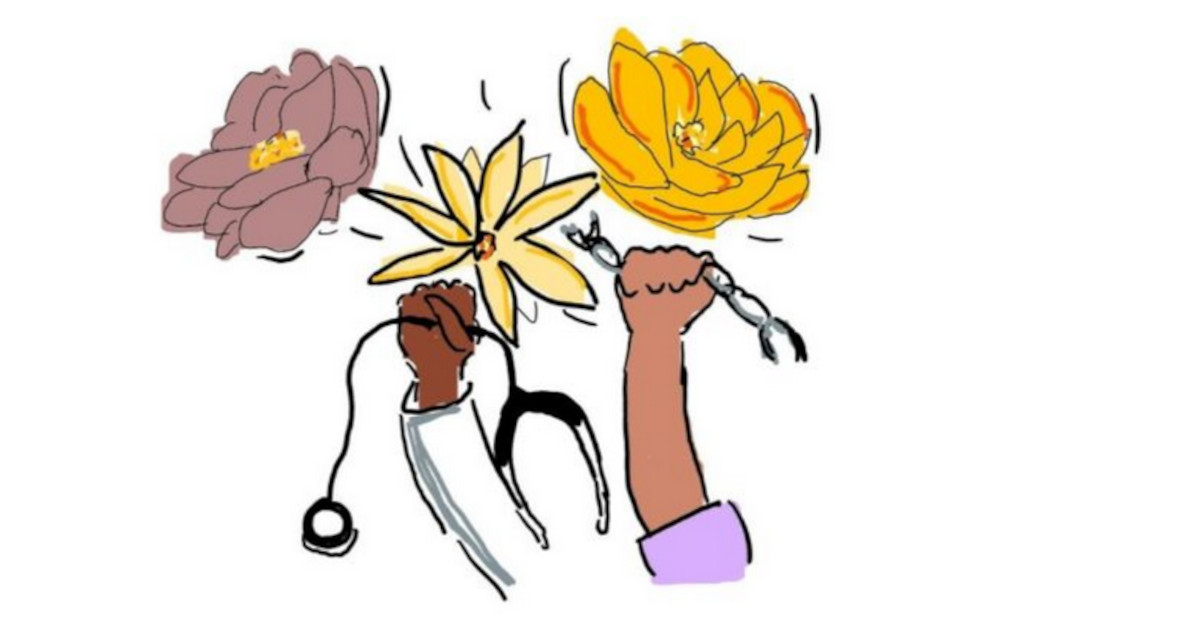 Claire Bodkin and Sara Alavian are both physicians in Hamilton, Ontario. They are also part of an ad hoc group of health workers from different parts of Canada with an interest in prison abolitionist politics. Scott Neigh interviews them about what it means to think about prison abolition in the context of health care, and about the zine that the group will be releasing on February 1, Caring for People Who Are Detained: A Handbook for Healthcare Workers + Trainees.

Health and health care interrelate on a number of different levels with the range of institutions and practices encompassed by policing, courts, prisons, and the rest of the carceral state.

On one level, the carceral state is an integral part of systemic harms to health. It is increasingly well understood how experience of things like poverty and racism, organized into people’s lives through social relations like capitalism, white supremacy, and settler colonialism, can have hugely detrimental impacts on the health of certain groups of people. As social movements have made so clear over the last year, policing and prisons are an important part of maintaining that status quo. As well, such movements have also been very clear about the ways in which policing is itself a source of direct harm, particularly to Black and Indigenous people, but also to people who are marginalized and criminalized in a lot of different ways.

On another level, and in the context of those bigger picture realities, there are the many different ways that the carceral system interacts with the medical system. For instance, sometimes seeking health care can also result in police attention, as when both paramedics and police respond to 911 calls. There are situations where police seek to get information about patients from health care providers. And people who experience illness or injury while they are under arrest, detained, or imprisoned might have little choice but to receive health care while a police or corrections officer is present – including when an officer is the source of the injuries.

And finally, medicine itself can be carceral, and medical workers can act in everyday ways that support carceral systems. The most obvious examples of the former are the aspects of the psychiatric system that involve incarceration, though there are others. And the latter can include things like how medical staff relate to police and how they relate to people in custody.

Bodkin is a resident in family medicine as well as a community organizer, and Alavian is a resident in emergency medicine. In their experience, the only mention of policing in their formal medical education was a discussion of basic guidelines for maintaining patient confidentiality in the face of inappropriate inquiries from the police. Other than that, policing, prisons, and the carceral state; their deep interconnection with settler colonialism, anti-Blackness, and white supremacy; and the implications of all of that for the health and health care of their patients were not discussed.

Though their group has also had many discussions about the bigger picture issues and the need to build transformative alternatives, the zine itself is focused on giving practical advice specifically related to the encounter between a health care provider and patient, and its aftermath. The goal is to be an educational tool for medical learners and people who are already practicing. It aims to help them increase confidentiality, safety, and dignity, and reduce harms for patients who, for instance, are detained, are accompanied by a police or corrections officer, or who are otherwise dealing with the criminal legal system.

After producing a preliminary draft of the zine, they got feedback on it from a range of people who had received health care in relevant contexts in both community and carceral settings. Earlier, they had a successful crowdfunding campaign to raise money both to produce physical copies of the zine when the time comes, but also to pay those with lived experience for their labour and expertise.

The zine itself and its website will launch on February 1, 2021.