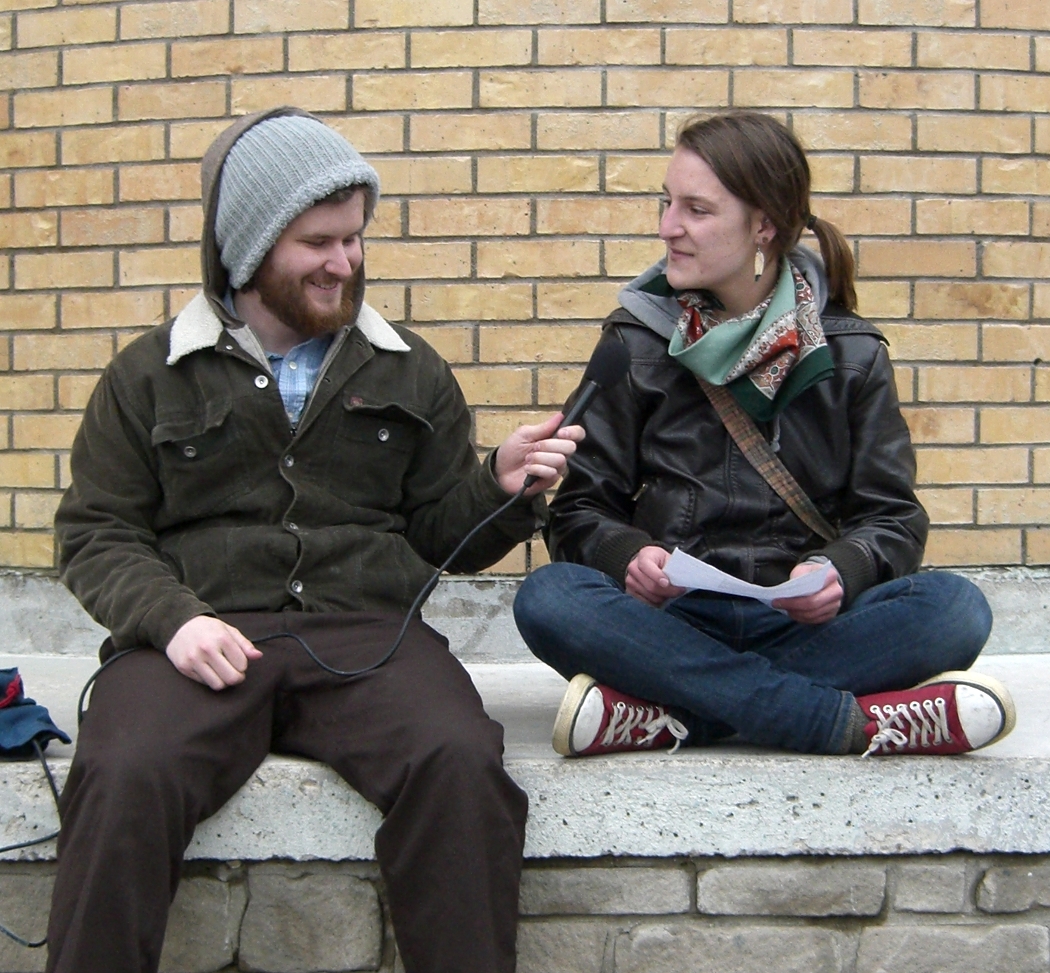 In October, Cortney Dakin performed a rap that we called "Bikes Not Oil!"

She re-wrote the rap for the April Day of Action Against Extraction, on the anniversary of the Gulf Coast disaster.

At the rally in London, Ontario, Cortney performed the rap with Jonathan Ã“ Glaisne -- with some other community members -- just before we biked out for another critical mass ride to the Shell station where we had our protest in October.

The April rap also is at the start of this video.

Here are the updated rap lyrics -

Thanks for all coming out to the pumps to party today,
We’ve so much to celebrate, so much more than I convey
Riding here with the wind in our face, feeling of flying,
Revel in not supporting torture and Iraqis’ dying.
Smiling, because its great fossils don’t fuel our rides
Drivers must be jealous we’re outside and got killer thighs.
We party because we realize the need for clean air,
Fertile land and drinkable water if we want a future to share.

So, all the freaks on concrete where there should be soil,
Raise your fists and yell, bikes not oil!
Bikes not oil!

We don’t want to poison people or displace them from their land
We don’t want to excavate earth to pollute water with tar sand,
The destructive mega-project funded by RBC
The financer of death affecting the Athabasca Cree
Know, the problem isn’t just in the Gulf with BP
It’s happening in your backyard, in Sarnia and BC.
Let’s party harder to make Enbridge take responsibility
We’re partying for our lives, alright? I’m tired of saying please.

All the freaks on concrete where there should be soil,
Raise your fists and yell, bikes not oil!
Bikes not oil!

Partying here, second year, on our demands let’s get clear,
Reprimand extraction, same consensus next year,
Hearsay,  flow is fluid life like water, we’re a rising tide,
Requiring immediate fossil fuel phase out to be satisfied,
Contrive, resistance insisting on reparations,
Community control of land use and ecological restoration.
Self-determination for all indigenous nations
Recognized by both the state and the corporations
All the freaks on concrete where there should be soil,

This land is free! Doesn’t belong to you or me,
We are part of it, need it to be and meet our needs,
So the gulf wasn’t BP’s and it’s even yet to be cleaned,
On today the disaster’s anniversary
Nuclear is not in our vision of sustainability
Forget fracking, we need trees to breathe,
No one’s setting water on fire on native territory,
We are all human beings, a united multiplicity,

We’re a grassroots movement, helping to end the climate crisis
Corporate control of resources needs to melt like glacier ice is.
Shell needs to get the hell out of Nigeria, extraction needs to stop
Some of the people there they poison have never consumed oil, not a drop.

All us freaks on concrete where there should be soil,
Pump your fists and yell, bikes not oil!
Bikes not oil!