Voices of the Women in Radio Conference (Part 4 of 4)

Voices of the Women in Radio Conference (Part 4 of 4) 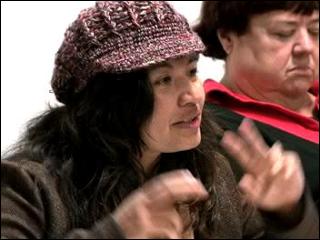 From June 6-10, 2011, community radio broadcasters of all sorts gathered in Halifax, Nova Scotia for the annual National Campus/Community Radio Conference (NCRC). As in previous years, a full day of the conference was devoted to the Women in Radio conference, looking at the contributions of women in the sector, and also strategizing to bring down patriarchy on and off the airwaves.

I interviewed 4 women at the NCRC who come from different parts of the country, and are all doing inspiring radio work, bringing issues of gender, colonialism, and international solidarity to the forefront.

The first interview is with Gunnargie O'Sullivan of CJSF and Coop Radio in Vancouver. Gunargie is an indigenous woman and a long-time community broadcaster and producer, currently sitting on the board of directors at Coop radio. She hosts two programs, one longstanding show called When Spirit Whispers (Mon 1pm-2:30pm) and a new show, Late Night With Savages (Wed. 11pm-12am). She has produced and co-produced many community arts events, often under the Red Jam Slam label. Here, she talks about the neglect of indigenous voices in the media, the space her programming opens up, and the importance of having native representation in the NCRC conference.

The second interview is with Laura Yaros from Radio Centre-Ville in Montreal. Laura has been active in feminist, lesbian and community groups for 38 years. She produces and hosts "Matrix", a 60-minute weekly magazine by, for and about women from a feminist and progressive perspective. In this interview she talks about changes in the community radio world, linking her queer activism to radio, and amplifying queer voices on the radio.

The third interview is with Frieda Werden. Frieda is the Public Affairs coordinator at CJSF radio in Burnaby, BC, and the co-founder and producer of the weekly radio series WINGS: Women's International News Gathering Service, which debuted in 1986 and has been in weekly syndication for more than twenty years.

And finally, the fourth interview is with Sylvia Richardson. Sylvia is the producer of Latin Waves on CJSF radio in Burnaby, BC, and the North American vice-president of AMARC (The World Association of Community Radio Broadcasters). In this interview, she speaks about the historic resolution which was passed at this year's NCRC to support the Palestinian-led Boycott, Divestments, and Sanctions campaign against Israeli apartheid. With this resolution, the National Campus/Community Radio Association became the first national Canadian media organization to endorse the BDS campaign.

All interviews produced by Aaron Lakoff of CKUT radio in Montreal.