Reflections and impressions inside the ongoing war

Reflections and impressions inside the ongoing war 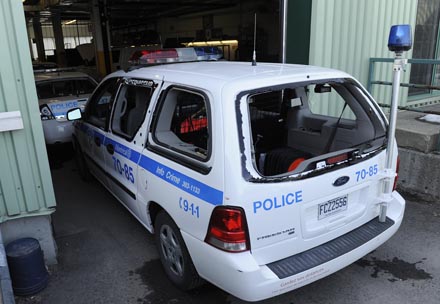 More and more people notice that the complaints around police
deontology are changing nothing in the face of the general repression
in which we live.  The cops act in combat, and defend as such. Year
after year, these demonstrations against police brutality, with their
loads of arrests, are only at the most an occasion to meet around our
rage but are more often one large show.

Many think it is as well a good occasion for the cops to refine their
tactics, test their equipment, their practices, catch the protestors,
and repress dissent even more.  If this year's  demo and its police
deontology complaints fail and the police state itself becomes
increasingly more powerful, it is also because we refuse to consider
the continuous war that the corporations, the state, the cops , the
armies and so many other groups have formed to keep us away.
We live in the middle of a total warfare, where every day we are
delivered murders and wars as ultimate examples.  Capitalism,
colonialism and patriarchy never stop to invade with all their
violence. In spite of ourselves, we are in a permanent war.  And even
when we prefer love, solidarity and life... we are left with no other
choice.

In this case, materially attacking the wheels of our exploitation is a
constant necessity. When we stop to demonstrate in the pre-existing
framework that is designed to enclose and surround us, when we switch
to the counter-offensive when they are not expecting it, they start to
feel their weakness. This weakness requires more exploration.

Actions in Montreal where  20 masked persons who destroyed 11 police
cars and their computers without getting caught are examples of what
can cause maximum perturbation and bring about minimum repression.

This is as well what we had lived in the process of fighting against
the 2010 Olympic Games.  Most of the clandestine actions taken by
affinity groups have brought very little arrests and a maximum
material destruction against that which is oppressing us.  If these
actions were more constant and collectively supported, we would end up
making important parts of the system tremble and fall.
If these forces were not attacking us daily we would certainly have
more important things to do than to organize together to
destroy their infrastructures. However, they do not stop imposing
their war upon us.

In this case, camps are established.

In Vancouver, The Heart Attack demonstration has launched an ongoing
debate between the non violent, dogmatic pacifists who serve the
system by means of reformism and those who serve actual opposition to
this system of exploitation. Each time we carry a harder blow to the
face of the system that is destroying our collectivity as well as all
of our liberties and the life to which we are a part of, there are
people who denounce themselves and each other in their own
collaboration.  There are certain people who choose to fight for life,
solidarity and freedom.  We are on the side of life.

That is why, as some would say, we are made of riots and love.

Every day, we must group to face this reality. Every day we are attacked.
In KKKanada, indigenous warriors who under constant defense of their
territories, by their more organic existence to mother earth, their
determinations to block the process of conquest, their solidarity to
their people, by their actions of peturbation, blockading and
sabotaging, can be nothing less of a major inspiration to the
struggle.  It is from those involved from whom we can receive
leadership in the form of inspiration and not in the form of oppresion
and with whom we can bind within the framework of this war.

As descendents of the conquests, created by the system that has wages
this war, we could not have it any other way than to position
ourselves on the side of indigenous resistance, by day to day
solidarity and by supporting their actions.

In this case, in this war, the solidarity implies attack.  This is why
we have no other choice.

But to better attack, we must as well develop stronger roots.  We
must construct in terms of community, more links, sharing, constant
support, created in neighbourhoods like on our lands wherein
reinforcing our solidarities and our strengths.

It is equally important to notice that we must not wait a G8, G20 or
the Olympics to mobilize, because these events are nothing more than
events in and of themselves particularly inscribed in a permanent war.
If we allow ourselves only to take root in these and other choices
similar to, we are not organizing in our daily life but more in and
around convergences.  Convergences during these events are relatively
symbolic, however, our lives are fundamentally material.  The more
material we attack the more we attack the institutions that exploit
us. This is why we must head towards more strikes, riots, blockades,
sabotaging, property destruction and physical confrontation....THIS IS
WAR.

For now we don't have the means to wage this war head-on againt
the all powerful system. This is why it is always better to
counter-attack spontaneously and as anonymously as possible.

In this situation, the planned demonstrations can mostly serve as a
tool for expression and as a meeting point, and can temporarily
disrupt the status quo. But demonstrations will not do on their own.
Far too often, we have repeated this strategy without important
results. The demo against police brutality, against the police or the
war in general are very concrete examples that these police and this
war are thriving.  Repression is global.

May our insurgent solidarity continue to globalize.