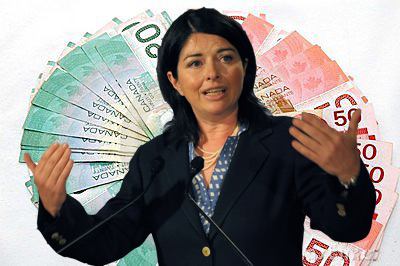 It must have been a frustrating summit for student and union leaders talking to representatives from the Liberal Party of QuÃ©bec (PLQ) government and university/CEGEP administrators. Everyone was looking for a way out of the crisis that has seen the longest student strike in QuÃ©bec history take the province to the brink of a lost semester. But the government had painted itself into a corner with its massive “non-negotiable” tuition increase and it was stubbornly determined to hold the line.

Jean-Jacques Rousseau once explained that the poor have only their freedom to lose but the rich are sensitive in every part of their private property and so it is much easier to hurt them. That in a nutshell explains why the PLQ and administrators could not find the money to meet the students’ bottom line–a tuition freeze.

Education Minister Line Beauchamp can raise an easy 60k in one morning for the PLQ from her “breakfast club,” which includes mafia kingpin Domenico Arcuri. Premier Charest and the PLQ have many such deep-pocketed friends, but there was never any question of asking the 1% to help out indebted students.

The “taxpayer” (a category which includes the minimum-wage-earning single mother and the CEO of a fortune-500 company) cannot be asked to take on any more of the burden with respect to post-secondary education. Students must pay their “fair share.” Just like every person, from the single mother to the CEO, must pay the $200 health tax to finance the public health system.

But what about the huge salaries paid to university administrators? I’m sure representatives from the ConfÃ©rence des recteurs et des principaux du QuÃ©bec (CREPUQ) listened very politely to such arguments while texting their accountants about moving funds to the Cayman Islands.

In the end, the May 5 offer made by the government and administrators promises to create a committee, the “Conseil provisoire des universitÃ©s,” to recommend to the Education Minister the composition of another committee, "conseil permanent des universitÃ©s." Both committees will have a mandate of looking for the money to finance a reduction in administrative fees charged to students (thus leaving the tuition increase intact while at least offering the possibility that the increase will be compensated by equivalent fee reductions elsewhere).

Will the committee-creating committee, which includes administrators, government and business leaders as well as students and union leaders, put forward recommendations to form a committee capable of finding the savings that are required to finance the fee reductions? If it does, it can “recommend” such a committee to the Minister of Education, who is then free to follow the advice… or not.

The government’s offer ensures that fees will be reduced for the first half of the 2012-2013 academic year to compensate for half of that year's $254 tuition increase. But, for each increase planned for the six-and-a-half years after that, all bets are off.