WSF 2016 in Montreal: But where are the social movements?

WSF 2016 in Montreal: But where are the social movements? 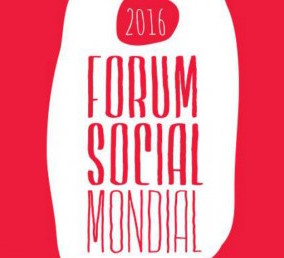 The promoters of the World Social Forum 2016 in Montreal held an international seminar on October 1st and 2nd to discuss the event planned for next August. This special meeting, convened just a few days earlier, was officially called to formulate the great themes of the Forum. Further, it represented a final attempt to bring into the forum organizing process the major social movements from Quebec whom, 10 months before the event, are still continuing to look at the project from a distance.

If the October meeting was successful in identifying 12 main themes for the WSF 2016, the participation of barely fifty people in this activity must raise a few eyebrows. Only fifteen of those present were from social organizations, most of which have still not given formal support to the project. That is the sad reality that should worry even the most optimistic supporters of the Montreal WSF.

The meeting ended with a poorly attended press conference and the only two articles published in the aftermath raised the serious problem of obtaining entry visas into Canada for participants from the Global South.

The Promoters of the Montreal WSF claim that their project is built around social movements. Yet the truth is that Quebec social movements are barely present while those from English Canada are mostly absent.

First, the social movements were not the basis for this project. They were not involved in the early discussions that preceded the decision of the WSF International Council. The Forum was, and is presented to them, as a decision from above, from an obscure Council of “wise people”, not as the result of a local dynamic. And unfortunately, it is precisely the case. Labor organizations, students movements, women's associations, environmental and community groups, were for the most part informed about the WSF when its arrival in town was confirmed and until then, they had nothing to say on its purpose. Even now, very few participate in the “open” meetings held in Montreal and they do not fund the project. When present at meetings, their representatives often insist that they do not have a formal mandate from their groups and that they are only there as observers. Essentially, they are watching the train go by. And yet, the promoters of the Montreal WSF continue to act as if by magic, the social movements will jump on the bandwagon, simply because the train is rolling by, without knowing where it is headed.

In a recent report circulated on the lists of the International Council (IC) of the WSF, Chico Whitaker, a member of the Council, mentioned the "political effervescence" of Montreal in reporting on his participation in an October 3rd demonstration against austerity policies imposed by the Quebec provincial government. And indeed, Montreal is bristling these days with mass mobilizations. The said demonstration, organized by a Common Front of public sector unions, was attended by over 150,000 people. If Mr. Whitaker had been more aware of local dynamics, he would have been shocked to learn that the unions behind this action are only marginally present in the WSF 2016 process.

The very structure of the WSF 2016 is an indication of the problem.

It is worthwhile mentioning here a second reason for the low participation of social movements. Labour organizations are not involved in the project because the structure of the WSF 2016 does not provide a political space for movements. This situation is a direct consequence of the fact that it is a group of individuals - not movement representatives - that initially convinced the International Council to hold the event in Montreal, without ever building a political rationale that would have mobilized these movements.

Since this initial group has chosen not to rely on the existing structures of the Peoples Social Forum held in Canada a few months before (the Peoples Social Forum was held in Ottawa in August 2014), the promoters had but one choice: build another structure. Not only is this new structure created at the expense of the one already in place around a previously held social forum, but it is only a logistical structure, aimed specifically at organizing a single event – rather than creating a larger and long term process - and is not fueled by a political structure where social movements can take part.

It is important to underline here that the structures of the 2014 Peoples Social Forum were both political (at sectorial and regional levels) and logistical, while the WSF 2016 structure is only logistical. At the end, the WSF facilitating committee tries to attract social movements by offering them to get involved in working committees where they sit with individuals, certainly engaged citizens, but with no network or capacity for mass mobilization. In fact, even movements that might want to get involved wonder where and how they could contribute when the WSF structure does not offer the necessary political space to do so.

Ultimately, despite all pretensions to the contrary, the structure of the WSF 2016 is pyramidal. At the top sits a closed facilitating committee, composed essentially of the initial project promoters, that leads the various working committees.

Building on the ruins of the International Council

One may wonder where the idea of organizing a World Social Forum without an anchor in local social movements comes from, especially after these movements have recently initiated an unprecedented Canada-wide Social Forum with participation from Quebec, English Canada and Indigenous peoples. The problem is obviously rooted in the particular genesis of WSF 2016, a forum that is top-down. But other hypotheses can be raised, specifically the troubled international dynamic affecting the WSF process itself, centered on an International Council (IC) in deep crisis.

For several years now, the World Social Forum process has been mired in a crisis that threatens, even in the short-term, to put an end to the project. In fact, Montreal could well prove to be the last nail in the coffin of the WSF process. Several founding members of the International Council have dropped out altogether, while the representativeness of those who remain active is severely criticized and implementation of the few decisions taken at the meetings is at best spotty. In desperation, some members of the IC seem to unfortunately have adopted the idea of organizing forums for the sake of holding forums. They somehow believe that the process could be saved by opening it to what they call “new movements” since according to them, the "old movements” are no longer able to mobilize.

By "new movements" they mean those that are inspired by "Occupy" or the “Indignados” in the United States and Europe. These movements are indeed more spontaneous, wider and more inclusive than traditional structures. In addition, their “governance” is more horizontal and based on individual participation instead of centralized leadership. However, the absolute dichotomy between “new” and “old” movements must not be overstated. As the Arab Spring in Tunisia has shown, the existing labour federation, UGTT, played a key role along with the new movements in overthrowing the corrupt Ben Ali regime. Closer to home, our very own “Maple Spring” in Quebec has often been presented at the international level as being a “new movement”. Yet, the participation of more “traditional” organizations such as student associations, community groups and labour unions was absolutely key in launching the mass mobilizations of Spring 2012.  If we talk about “new movements” in Quebec and Canada, we should speak of the grass-roots environmental groups that have sprung around the anti-fracking and anti-pipeline movements (#Blockadia) or the Indigenous Peoples movements fighting for their historical land rights and against extractivist industries or the movements against racist police abuse. But again, most of them are not active in the 2016 WSF project.

In conclusion, part of the WSF International Council seems to be tempted to embrace new movements for its own salvation, with the assumption that Quebec could be a starting point. But in fact, it is clear that if certain principles of direct democracy have been adopted by groups like the student unions and community based organizations, which are generating a large part of the effervescence mentioned earlier by Mr. Whitaker, most of those marching in the streets belong to “old movements” and they are still not at the table with the WSF 2016.

Across Quebec, and probably internationally, building solely on "indignant individuals" rather than banking on a convergence of both new and established social movements, is a fantasy.

Navigating Without a Compass

Last June I published a first text raising several fundamental questions about what some call "the opportunity to organize a first Social Forum in the North." How can we hope to reach 50,000 to 80,000 people as announced by the project? What kind of international participation? From where will come the $2.8 million budget necessary for its implementation? What objectives and what expected impact for social movements? What impact also for the national structures of the Peoples Social Forum and the wider process of the World Social Forum? And others...

Since then, despite the publication in September of an updated “WSF 2016 Concept Note", answers are slow to come and time passes by dangerously.

Meetings with the political structures of the People Social Forum were held, and even if the PSF decided to set up a Solidarity Fund to enable activists from Western Canada, Indigenous Peoples and racialized communities to participate in the Montreal event, it was unable to find a political space within the WSF structure.

In terms of participation, the updated concept note now talks about 25,000 people rather than 50,000 to 80,000 as previously announced at the International Council. Still, no strategy to mobilize mass movements in Quebec is introduced. No serious attempt to mobilize movements outside Quebec is contemplated. Clearly, the project organizers rely on magical thinking, hoping that the words “World Social Forum” will by themselves instantly seduce unprecedented numbers of “indignant individuals”  from the province. The fact that we have never exceeded 6,000 people in a social forum in Canada does not seem to faze them.

Financially, no progress is yet announced. The hypothesis that organizations such as trade unions will contribute significant amounts of money to the project remains to be proven, as nothing has yet been confirmed and, on top of it, few are active in the process. Same thing at the various levels of governments, both from Canada, Quebec and the city of Montreal. In terms of space, already, at least one university originally scheduled within the WSF spaces announced its refusal to host activities.

The 2016 WSF organizers have announced that an online social fundraising campaign should soon be launched with the goal of creating a solidarity fund to enable the participation of people from abroad. It is noteworthy at this point to see that the budgets presented so far did not include ANY solidarity fund, which would actually makes this WSF the first one to offer no support for participation from the global south. Will social financing (or crowdfunding) generate the needed funds? Difficult to say. But it will be probably very far from a foreign participation initially evaluated between 5,000 and 10,000 people.

Time passes and the risks apprehended yesterday are now confirming themselves more and more. The WSF in Montreal will not be a traditional World Social Forum. Both the participation of movements and individuals will be much less than in previous editions. International participation will be reduced, at best, to the presence of the elite of European NGOs. And the political scope of the whole operation remains unclear. When asked for the purpose of this World Social Forum, promoters continue to hammer that this is a great opportunity. But an opportunity for what? Apart from the promoters, very few seem to know.