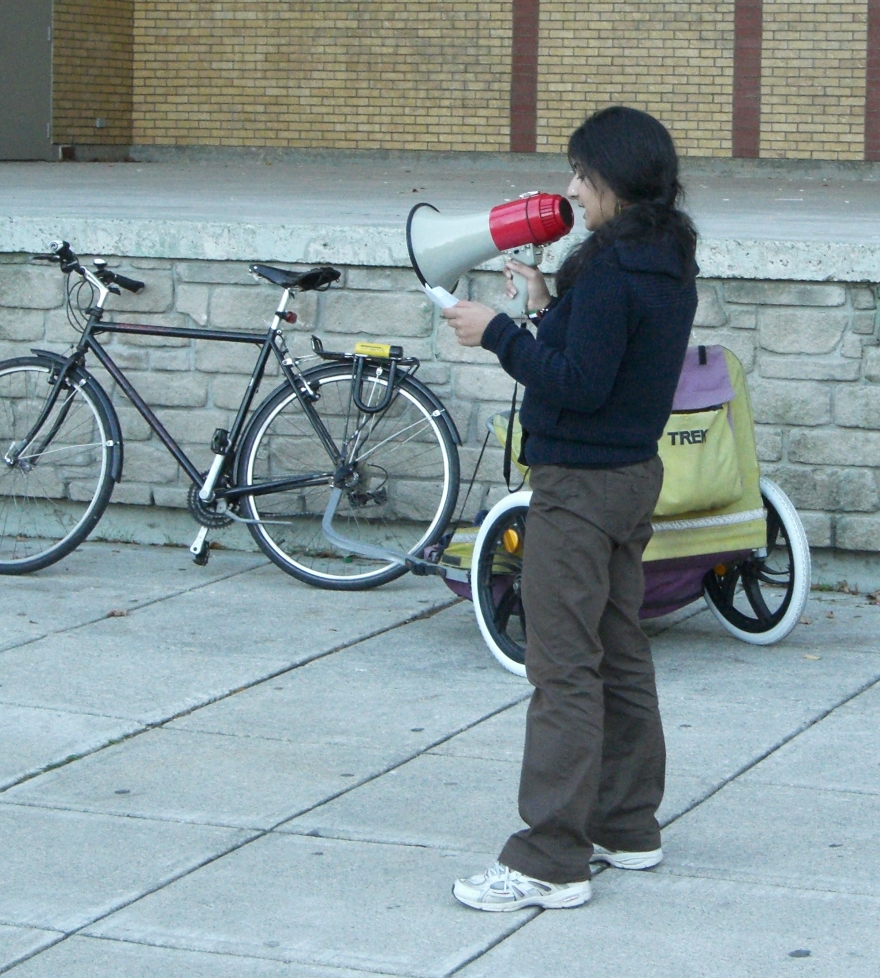 October 12th was a day of action for indigenous rights, climate justice, and Latin American solidarity.

At the London, Ontario rallies, community members shared knowledge and experiences about pertinent struggles and problems.  Below you can read three community statements that had been written out, before the rallies.

David was our MC at the gas station protest.

Here are three of the community statements -

Pakistan a country flowing with diversity, beautiful languages and natural beauty ranging from vast farmlands to incredible mountainous regions was left devastated in July 2010. The massive floods covered 1/5th of Pakistan, leaving approximately two thousand dead and well over 21 million injured and homeless. Never has a population been this devastated. Never has the need been greater. The provinces not affected by floods have suffered equally. With citizens now facing soaring food prices that many were unable to afford anyways. I have spoken to many friends and family who are currently in Pakistan. They believe food prices have risen over 400 percent. With crops damaged and nearly 200,000 livestock dead, it's reasonable to believe why food is scarce but it’s unreasonable to leave a population starving. Disease outbreak because of the floods continues to affect people. Despite the significant impact the floods have had on Pakistani citizens, the Pakistani government has lacked response. Protests around the country have been held against the government but they have not succeeded in attainting what they asked for-their proper rights as human citizens. I urge every one of you to demand action for a country that was fragile to begin with. I urge every one of you to ask why the floods were allowed to devastate so many people when they could have been taken care of beforehand. I urge every one of you to think about the environmental impacts the floods are going to have for a long time in Pakistan. Please donate. Please volunteer. Please keep the stories of Pakistan floods alive.

Another local activist speaks out against Canadian mining companies -

I’m sure you are all familiar with evils that those oil companies do around the world. Oil is not the only cause of environmental destruction and climate change. The mining industry also benefits from environmental destruction and human rights violation. Especially, Canadian mining companies are notorious for causing many many problems everywhere in the world from Tanzania, the Philippines, Papua New Guinea, to Australia, and all over Latin America.

Everywhere they go, they destroy forests, poison drinking water, and displace indigenous peoples and small-scale farmers who depend on the environment for their subsistence, and force them into poverty. They also divide local communities and cause internal conflicts by telling them that mining will bring them jobs and education, and those who oppose mining are backwards and don’t want any “progress.”

And in Latin America, they are known for paying thugs and paramilitaries to harass and kill anti-mining activists who stand up for their communities. In north-western Ecuador, Toronto-based company Copper Mesa hired ex-soldiers to physically threaten unarmed local villagers with guns and peppers tried to forcibly make their in despite their determined opposition to mining. In Cabana, El Salvador, Marcelo Rivera, a community leader who was strongly opposed to metal mining by a Canadian mining company Pacific Rim was “disappeared”, a terror tactic reminiscent of the civil wars in 80’s and found dead in a 60-feet deep well with a clear sign of torture. Shame! And what’s more shameful? Despite these gross human-rights violations, many of those mining companies are openly allowed to trade through Toronto Stock Exchange. SHAME! And let’s not forget also that there are mining companies on our own soil here in Canada destroying environment and causing social problems for many First Nations communities.

While things may seem hopeless, it is important for us to remember that despite environmental destruction and human rights violation, mining-effected communities here and abroad remain strong, resilient, and keep resisting. They never abandon hope. What they need is global solidarity and unified effort on part of Canadians to recognize interconnection of different issues, pressure those oil and mining companies to stop destroying Mother Earth here at home. So let’s keep this movement growing, you guys are amazing. Thank you. The people united defeated we’ll never be defeated!

Almost 20 years ago now, Rigoberta Menchu a Q’iche indigenous woman from Guatemala won the Nobel Peace Prize.  1992 was the year.  In Europe, and in many parts of Latin America, they were preparing to celebrate the 500 years of the “Discovery of the Americas”.  What discovery, asks Rigoberta in her acceptance speech? You can only discover what is unknown or inexistent. Indigenous peoples have been present and flourishing for thousands of years before the arrival of the first Europeans.

She went on to say:
“This prize... also represents a sign of the growing international interest for, and understanding of the original Rights of the People, of the future of more than 60 million aboriginals who live in our Americas, and their uproar because of the 500 years of oppression that they have endured. For the genocides beyond comparison that they have had to suffer all this time, and from which other countries and the elite of the Americas have profited and taken advantage. [...]
It is the recognition of the European debt to the American indigenous peoples; it is an appeal to the conscience of Humanity so that those conditions of marginalization that condemned them to colonialism and exploitation may be eradicated; it is a cry for life, peace, justice, equality and fraternity between human beings.”

That cry is still very much alive today.

Examples of struggles and resistance throughout the Americas

Indigenous communities are resisting the harmful effects of the Canadian Mining Corporation Goldcorp, whose local subsidiary has recently been responding to a resolution by the Inter American H.R. Court to suspend its operations by releasing its tailing ponds into the local waterways.

These small mostly Mayan indigenous communities have been locked in battle with the Mining multinational for years and the struggle has produced already half a dozen deaths and unspeakable harms to the health, land and water of the inhabitants of this region.

They deserve our solidarity and we will continue to support their struggle.

Take action: Contact Rights Action for more information about the issues, and what to do.

In Ecuador and Peru:

The Amazon is under assault from Oil Multinationals (Chevron, Texaco, Encana) with the cooperation of local governments.  Indigenous communities are organizing and fighting back to defend their lands and their environment.

An example: Last year, in Peru, rebellion of indigenous populations against new laws that allowed unrestricted exploration/exploitation on their lands.  The neoliberal government of the day wants to open up the Amazon, the New Frontier, so that some gringos and a few local elites can get rich.

Minga: great gathering of Indigenous Peoples who march from across the Country to present their demands to the Central Government.

Repression by the Uribe Government

In Chile: Struggle of the Mapuche people

More than 60 political prisoners.  At a recent hunger strike: demanding abolition of the Pinochet Anti-Terrorist Law which is being used to criminalize protest and dissent.

A struggle against Energy and Forestry Multinationals that are encroaching on their land and displacing them to build dams or cut trees.

There are many more examples...

Oka, Sharbot Lake, the tar sands, and many other ongoing struggles that you can support.

The movement that brought Rigoberta’s international recognition is now a growing world-wide movement, with indigenous peoples all over the Americas on the front lines of the struggle for climate justice to reclaim their land, culture and way of life against a system that is run for the profits of only a few very rich and powerful people.

Take action: We need to stand in solidarity and support those struggles.  We need to organize our own local communities, our homes and work places, to demand Climate Justice which is also Social and Economic Justice.