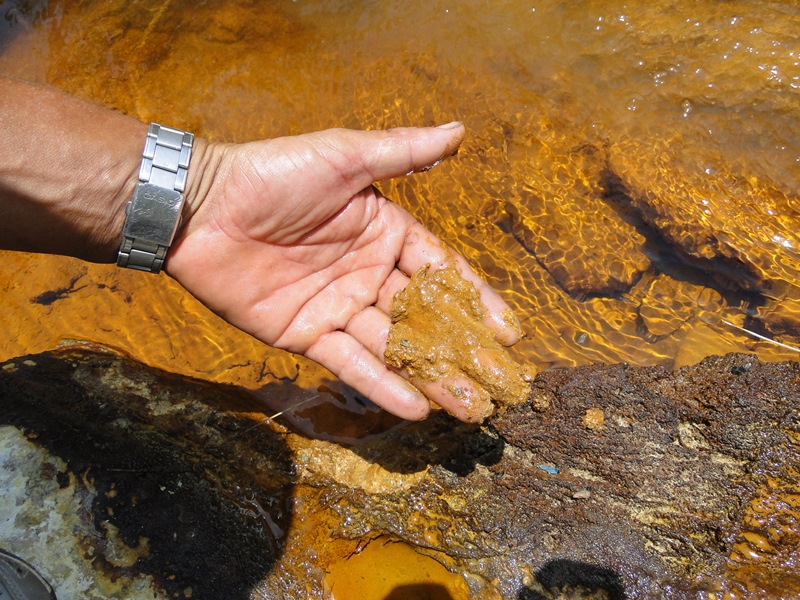 From May 10th to the 12th close to 50 delegates representing 22 different organizations from four continents gathered in San Salvador to take part in the first ever international fact finding mission around the impacts of metallic mining. It was organized by the International Allies Against Mining in El Salvador in collaboration with the National Roundtable Against Metallic Mining in El Salvador known as La Mesa; a diverse coalition of organized communities, NGOs, think tanks, and faith based organizations opposing mining.

The first day of the fact finding mission was composed of a forum at the University of Central America, (UCA) in San Salvador.  The forum gave delegates an opportunity to hear from local and international delegates about the situation of mining in the region and opened up a space for dialogue and exchange of ideas with the general public and representatives of the government.

The first panel, entitled “National voices and opposition to mining in El Salvador”, provided a panoramic view of the national issues including human rights, legislative and a moral and ethical perspective on mining.  This later point raised important questions that are not typically part of the debate when reflecting on mining and its impacts. Panellist JosÃ© Maria Tojeira, Director of Pastoral at UCA spoke about it being unethical and morally wrong for a poor country like El Salvador to finance gold mining, a luxury that only benefits a small group.

It is this same small group that helps maintain the world in a state of war, hunger and inequality. Reflecting on how Pacific Rim reacts to those who oppose it, he recounted how they have dedicated resources to insult their opposition calling them fanatical and ignorant. In response, he wrote an article in a local newspaper calling them imperialists and recalled the reaction he received.  “I got a call from the Canadian ambassador telling me to moderate my language”.[i]

Canadian embassies’ intervening on behalf of mining companies is not uncommon, even when presented with overwhelming evidence suggesting the companies are behaving unethically. This was recently highlighted in a report released by civil society organizations in Canada surrounding Calgary -based Blackfire Exploration in which the Canadian embassy in Mexico was unequivocal in its support for Blackfire even after evidence surfaced potentially linking Blackfire with corruption and murder.

The afternoon session presented an opportunity to situate El Salvador in the international arena and look at the global architecture of impunity that supports mining projects; in particular looking at the most insidious aspect of these agreements, the investor protection clauses.

Manuel Perez Rocha from the Institute for Policy Studies (IPS) spoke of the erosion of local sovereignty due to the impacts of Free Trade Agreements (FTA’s) and Bilateral Investment Agreements (BIT’s) with their secret and unjust trade tribunals used by mining companies to extort millions of dollars from governments. His presentation provided highlights from his latest report, “Mining for profits in international tribunals”.

As of 2013, there were 169 cases pending at the International Centre for Settlement of Investment Disputes (ICSID) of which 60 (35.7%) were related to oil, mining, or gas.

Latin American and Caribbean governments make up about 14% of all 158 ICSID member governments; yet are disproportionally impacted as they make up 79 (46.7%) of the 169 ICSID pending cases and 31 (51%) of the 60 current extractive industries cases.[ii]

Presenters explained how Canadian based Pacific Rim and American based Commerce Group are suing the government of El Salvador for not granting them permits for potentially environmentally devastating gold mining projects. These suits were brought forward to the ICSID, a non-transparent international trade tribunal based out of the World Bank Group. In the Pacific Rim case, ICSID ruled that the company did not have jurisdiction to proceed with their case under the Central American Free Trade Agreement but that it would be allowed to proceed utilizing El Salvador’s own 1999 Investment law. Pacific Rim has increased the damages sought from the state of El Salvador to $315 million even though it only invested an estimated 77 million in the project. The logic being that they should be compensated for the loss of future revenue.

The afternoon sessions allowed for more informal discussion and interaction.  One session took a general look at the extractive industry in the region, specifically Mexico, Guatemala, Panama, Honduras and Ecuador. Speakers shared examples of their countries unique cases with mining, the impacts and resistance to it.  Also some common threads were woven together when analyzing the impacts of mining across all areas.

Common impacts of mining in the region:

The delegation travelled to the department of CabaÃ±as to meet with local community leaders and discuss the issue of Human rights. While in CabaÃ±as, members of each local group belonging to La Mesa presented their organization, its work confronting mining and the impacts it has had on their communities.

One of the presenters, Wilfredo Lianes a youth from San Isidro and a member of the unified movement of Francisco SÃ¡nchez (MUFRAS-32) explained how his group focuses on helping educate local and international communities about the impacts of mining in the region, and the issues of corruption and division that it has brought. They do this by undertaking protests, festivals and public forums.  The fact that the government of El Salvador stopped issuing mining permits to companies was a real boost for their movement but at the same time it brought a significant shift in Pacific Rim’s tactics towards them. The company is accused of utilizing kidnapping, intimidation and even murder against community members opposed to the mining project. This was highlighted internationally in 2009 with the murder of Marcelo Rivera, Ramiro Rivera and Dora Alicia Recinos and her unborn child.

Just the day before our arrival, the coordinator of MUFRAS- 32, Hector BerrÃ­os’ brother was killed. It was too early to determine if the murder was linked to the anti-mining struggle or not but it did bring home the fact that the struggle in CabaÃ±as is a struggle of life and death.

When asked what message he had for Canadians, Wilfred responded unequivocally, “it’s mixed because we receive a lot of support and solidarity from the people of Canada through delegations.  However, knowing that Pacific Rim is a Canadian corporation is disappointing. We ask that Canadians denounce what their company is doing here and also the ICSID case they have against us. If Pacific Rim would manage to win the $310 million dollar case it would impoverish us”.

The final day saw the delegation split into two groups with some heading to Asuncion Mita, Guatemala to meet with local community leaders and visit the Cerro Blanco Mine, while the second group travelled to Santa Rosa de Lima, a municipality of La UniÃ³n to see first-hand the environmental damage caused by the Commerce Group's San Sebastian Mine project.

The San Sebastian Mine has been one of the most profitable gold mines in the country with estimates of “seven billion dollars being extracted” [iii] yet very little has trickled down to local communities.

In 1968, Commerce group based out of Milwaukee acquired San Sebastian Mine where they began to produce gold but by the late 90’s stopped active mining. It was during this period that much of the environmental contamination is alleged to have taken place.  In the early 2000’s Commerce group received a new mining licence and commenced operations. By 2006 groups like the Center for Research into Investment and Commerce (CEICOM) issued a report documenting the environmental impacts of the mine.

The communities spoke to and showed the legacy of contamination left behind by the company, including contamination of their local water sources. Communities are dependent on the local water sources utilizing it for their domestic needs like, washing clothes, drinking, bathing and cooking with it.  Economically, it is very difficult for families to purchase water because of the high costs, on average spending about half their daily earnings; workers earn around $7/day. They explained that rare diseases such as Guillain-BarrÃ© syndrome which most often affects the nervous system, were appearing in their community. This rare disease which “The World Health Organization has established that the average level of incidence of the syndrome is one case for every 100,000 persons” [iv] yet in a community of 3,000 inhabitants rates are much higher, with at least six cases of the syndrome reported. They also talked about the challenges of linking many of the deaths to the poisoning of the mine because often when people die the hospital records the death as a natural death as opposed to something more specific or related to the highly toxic metals like mercury and cyanide found in the water.

“In 2012, the Salvadoran Ministry of the Environment (MARN in Spanish) found that the river flowing by theCommerce group mine site has nine times the healthy limit of cyanide and one thousand times the Salvadoran standard for lead in water for human consumption” [v]

In 2006, the Salvadoran state denied Commerce Group a permit to continue operating in San SebastiÃ¡n because of evidence that the mining project had contaminated the local water. Instead of looking to clean up the damage the company filed a $100 million lawsuit against the government of El Salvador under Central America Free Trade Agreement (CAFTA) at the ICSID.  Commerce Group was not only demanding compensation for its investments, but also the right to reopen the mine, against the wishes of locals and the Salvadorian government. Although, Commerce Group’s case was dismissed back in 2011, the company has appealed the ruling and has forced the government of El Salvador to spend over $800,000 in arbitration fees to defend itself. This is public money that has been siphoned away from helping impoverished local residents.

Canada, like the U.S had become increasingly marginalized in Latin America due to its destabilizing role in the region as it advocates for its mining industry at the expense of local community rights and autonomy. In order to counter this shift, the Canadian government has sought to deepen its economic foot hole in the region by signing FTA’s with local governments to protect its investments.  The Canadian government is looking to sign a trade agreement with the government El Salvador even though economic relations between both countries are modest, not surpassing $16 million.  According to some, this deal has little to do with trade and more to do with Canada expanding its mining footprint in the country. Even Canada’s own analysis appears to back this up, according to the Foreign Affairs and International Trade Canada website, “currently, trade in services and investment is modest and is not likely to increase in a significant manner, in absolute terms, as a result of the FTA”[vi].  This makes sense when one looks at how much the mining and mineral processing industry contributes in real GDP to Canada, in 2012 that number was $53.0 billion[vii].

Delegates who partook in the fact finding delegation were moved by what they saw and the testimony they heard from local communities impacted by mining. There was a genuine commitment to continue to work collaboratively to denounce the negative impacts of mining in El Salvador but also on a global scale.  An important takeaway was to continue building deeper links of solidarity with communities in the global south impacted by mining but at the same time work to challenge the model that makes that possible back in their home countries.