Honduras - Trade and Investment at the Expense of Human Rights

Honduras - Trade and Investment at the Expense of Human Rights 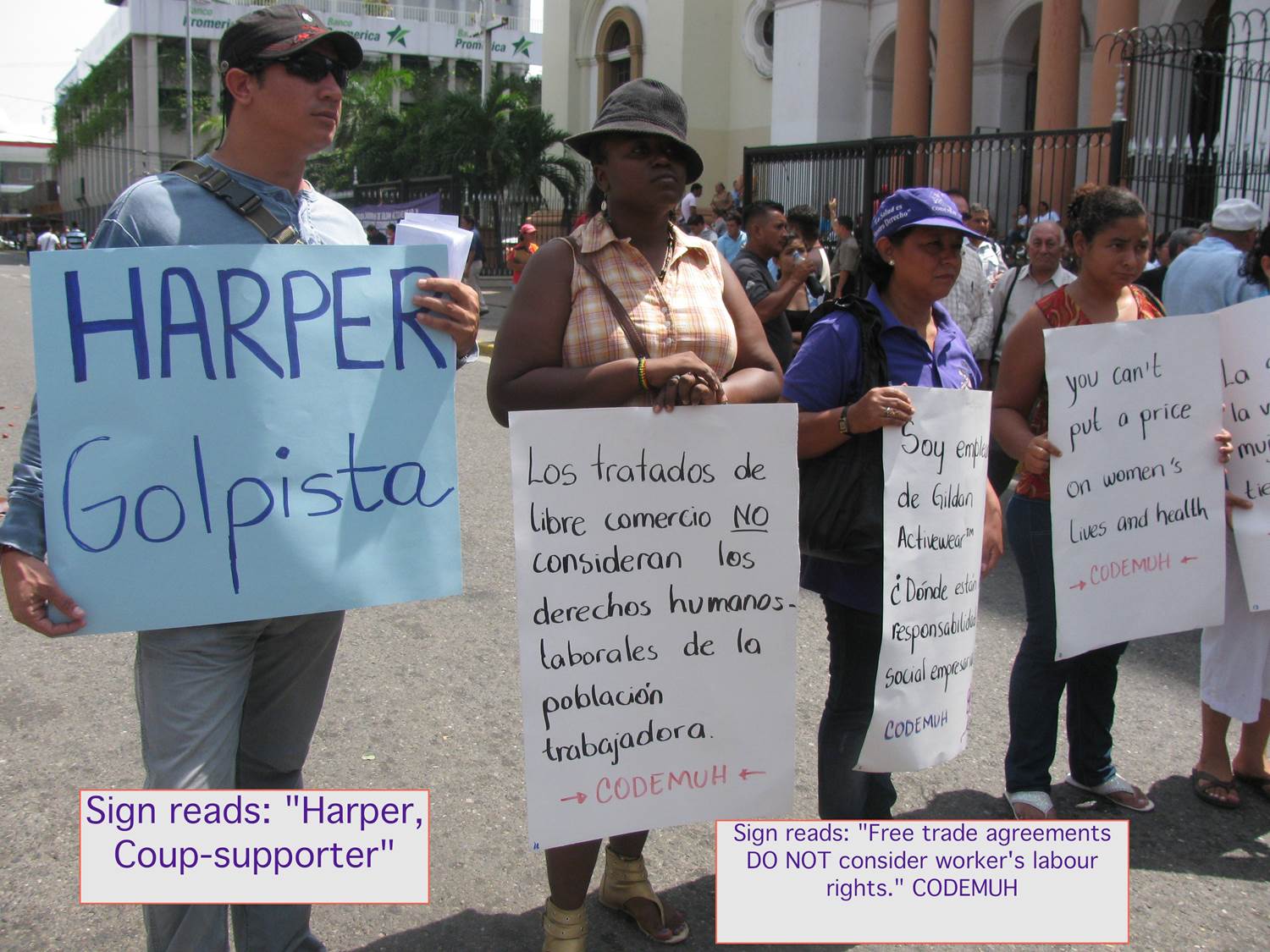 As Canadian-based civil society organizations working for social and environmental justice as well as human and labour rights, we strongly oppose the Canada-Honduras Free Trade Agreement. The lack of democratic and legal guarantees in Honduras is highly troubling – as are the levels of repression and impunity. In such a context, Hondurans can neither question the impact of trade and investment on their lands and livelihoods, nor reap the benefits of any potential economic growth. As a result, this FTA will put corporate rights ahead of community, human and labour rights.

In 2009, democratically elected president Manuel Zelaya was ousted through a military coup d’Ã©tat. The coup was staged by the Honduran army under the pretext of a constitutional crisis that had developed between the Supreme Court and the president. The move was widely condemned around the world, including by all Latin American nations, the European Union, the United States and the UN General Assembly. Canada’s refusal to consider any sanctions against the de facto regime or to condemn systematic abuses against the coup resistance in its aftermath was notorious.

In January 2010, Porfirio Lobo Sosa assumed the presidency through what many deemed undemocratic and illegitimate elections.  Amnesty International released several reports of voter intimidation and problems during the elections. Most foreign governments and election-monitoring agencies refused to send observers and many countries rejected the results of the election.

Since the 2009 coup d’Ã©tat, violence and repression in the country have reached an all-time high. Honduras is now considered the murder capital of the world, reaching a record high of 7,172 homicides in 2012.[1]  In 2013, there have been on average 10 massacres per month.[2]

The Attorney General of Honduras was suspended in April of this year because, in the past four years, less than 20 percent of homicide cases have been investigated -- let alone prosecuted.[3]  These high levels of impunity work to mask political violence.   Since 2010, there have been more than 200 politically motivated killings and Honduras is now widely regarded one of the most dangerous places for journalists.[4]

There are extensively documented cases of police corruption, with 149 extrajudicial killings by police recorded between January 2011 and November 2012[5], and allegations that the current police chief has been linked to death squads and forced disappearances. Yet there has been little to no progress on cleaning up the police force.  Instead, the Honduran government recently launched a new military police unit,[6] a move which has increased levels of militarization in the country and been heavily criticized by human rights defenders and civil society organizations.

As the Honduran people have been living in crisis, Canada has moved to expand its trade and commercial interests with the Central American nation.  Not only has Canada worked to finalize the FTA with Honduras, but Canada’s merchandise trade with Honduras has grown by 46% since 2007 -- reaching $257.2 million in 2012.[7]

The Government of Canada provided technical assistance and support in the development of a new mining law, passed by congress this past January amidst widespread opposition from Honduran civil society.  This law is a step backward for Hondurans who, on the eve of the coup, had a proposed mining bill that would have banned open-pit mining and given communities a decisive say before mining could take place on their lands. The bill was scheduled to be debated in Congress but died with the coup. The new law does not incorporate their proposals and has lifted a seven-year moratorium on new mining projects.

There has been a complete lack of transparency in the negotiation process of this trade agreement. To date, the Government of Canada has failed to make public the text of the agreement, despite repeated demands by civil society in Canada. Further, the government’s token Environmental Impact Assessment of the Canada-Honduras FTA, released in October, omitted any assessment of the impact of Canadian investments in Honduras because these figures are considered confidential.[8] The labour and environmental side agreements are mere window dressing given that they are not accompanied by any real enforcement mechanism to ensure they are adhered to.

We also have reason to believe that investor protections will be included in the Canada-Honduras FTA, given the precedents set by NAFTA and by Canada’s FTAs with Peru, Colombia and Panama. Through the investment chapters of such FTAs, corporations can sue governments in international tribunals, hindering governments’ ability to make decisions aimed at protecting the public good. We are concerned that such provisions in the Canada-Honduras FTA would exacerbate the human rights issues in Honduras, placing undue pressure on the government to cede to investor interests over community, human and labour rights.

Canada cannot claim that it did not know about the state of disarray in Honduras: This past spring, the Parliamentary Subcommittee on International Human Rights heard disturbing testimony on attacks against human rights defenders, widespread police corruption, soaring levels of impunity, and general crisis in Honduras[9]. Yet, our government seems intent on finalizing the FTA before this month’s presidential election in Honduras, prioritizing its own economic development while turning a blind eye to violence, repression and anti-democratic processes in Honduras.

“The signing of the agreement a few weeks before the Presidential election in Honduras is an unfortunate attempt to influence the results in favour of the incumbent and the status quo”, says Raul Burbano, Program Director  of Common Frontiers .

Canada can, and should, play a more constructive role in Honduras. Instead of amplifying trade and investment in a context in which there are no legal or democratic guarantees for those who may be adversely affected by them, Canada should be using its leverage to create positive change in Honduras.  It should call on Honduran authorities to take immediate measures to halt the intimidation, arbitrary arrests, forced disappearances, torture and killings of individuals and groups; and to fully restore freedom of expression so that journalists, opposition parties and critics can safely express dissenting opinions.

“We have long maintained that under the right conditions, trade can generate growth and support the realization of human rights.  These conditions simply do not exist in Honduras. Canada should refrain from signing the FTA with Honduras until there is a verifiable improvement in the country’s democratic governance and human rights situation. Until these things are achieved, the Canada-Honduras FTA will do more harm than good”, says Stacey Gomez, coordinator of the Canadian Council for International Cooperation’s Americas Policy Group.

Our current government has a poor track record in ensuring human rights accountability in trade.  The highly controversial Canada-Colombia FTA was passed in 2010 on the condition that both governments report annually on the FTA’s human rights impacts. However, this mechanism has proved to be a public relations exercise, yielding two non-reports of little methodological or substantive value. Ultimately, Canada must revise its current hemispheric trade agreements and must pursue a different trade agenda based on respect for human, labour and environmental rights.

Common Frontiers is a multi-sectoral working group which confronts, and proposes alternatives to, the social, environmental and economic effects of economic integration in the Americas. The Americas Policy Group is a coalition of Canadian civil society organizations focused on development and social justice issues in the Americas. Together, the groups gather approximately 50 member organizations.