BLOG (Joan Kuyek): A chromite smelter in Greater Sudbury and mining in the Ring of Fire â€“ what are the risks?

BLOG (Joan Kuyek): A chromite smelter in Greater Sudbury and mining in the Ring of Fire â€“ what are the risks? 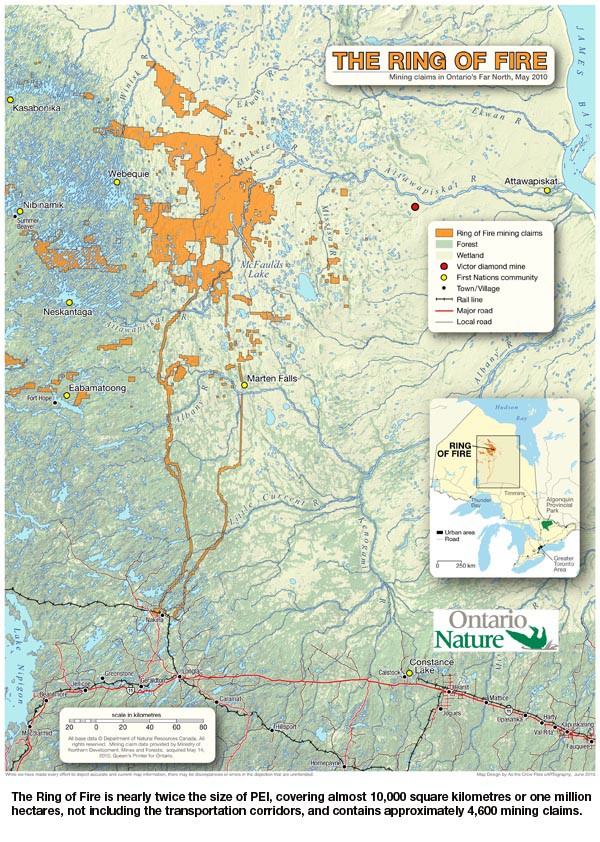 A chromite smelter in Greater Sudbury and mining in the Ring of Fire – what are the risks?

If it goes ahead, the Ring of Fire chromite mining and smelter in northern Ontario will bring serious environmental, safety and health concerns. Although we need more and better livelihoods in the North, we have to decide if the price is worth it. What are the risks?

Over 80,000 hectares of the Sudbury region have already been seriously damaged by 125 years of nickel and copper smelting. A ferrochromium smelter in the Sudbury Region will create new problems for our air, water and soils. A byproduct of all ferrochromium smelters is hexavalent chromium (Cr VI), which will be distributed in dust from the plant, will be stored in tailings impoundments and will seep into our waterways and aquifers (all tailings impoundments seep, and can also have catastrophic failures).

Unlike Chromium III which exists in nature and is relatively harmless, chromium VI is created by industrial processes like smelting, and is made worse by acidic environments (such as those in Sudbury).

Chromium VI is particularly toxic when inhaled and can cause severe damage to the lungs, kidneys, liver and blood cells. It is a known carcinogen.

At the mine site in the Ring of Fire, methyl mercury will be released by the draining of peat bogs, contaminating major rivers like the Attawapiskat.

Although the final routes and form of transportation are still undecided, ore from the Ring of Fire will be transported from the deposit to existing rail-lines and highways, where the ore trucks will compete on our already dangerous and over-worked highways and municipal roads. Individual families bear the costs of accidents on these roads; taxpayers pay to maintain them.

Can we depend on government to protect us from these hazards?

Our health and environmental protection systems are completely inadequate to protect us from these impacts. So far, the Environmental Assessment planned for the mine is completely inadequate; our environmental monitoring and enforcement regimes basically give industry a license to pollute, and – as we have already seen in Sudbury – the long term maintenance of tailings impoundments and smelter wastes have no financial surety.

What will it cost us in government subsidies?

Cliffs and the other companies have been demanding enormous government interventions to assist Ring of Fire development: building an all weather road and/or paying the lion’s share of a railroad to the mine site, transmission lines and possibly new power sources, drastically reduced hydro rates, contribution to the development of a new ferrochrome smelter, etc. They will also expect governments to pay for training for First Nations and others to be able to take on jobs, not to mention environmental protection and enforcement.

Damaging the Boreal Ecosystem on which life depends

The development of the huge chromite deposit will push roads (or railways) through the Boreal Forest, opening up a huge previously undisturbed area to mining, forestry, and other activities. Ontario 's northern boreal region represents one of the last intact, original forests remaining on the planet.

At 20,000 square kilometres, the Ring of Fire is six times the size of the Alberta oil sands deposits. The James Bay Lowlands is home to many at-risk birds, mammals, fish, reptiles and amphibians, such as lake sturgeon, woodland caribou, and wolverine. The development puts them at serious risk.

Not only will we lose much of this carbon storage, but a ferrochromium smelter is an enormous consumer of energy- requiring 3000-4000 kWh per tonne of ferrochromium produced (1). In Finland a new nuclear reactor was required just to power a smelter and refinery. The modern Merafe Smelter in South Africa produces 28.25 carbon dioxide equivalent (CO2e) per tonne of ferrochrome produced (2).

Parts of the world are already facing increased violent storms, droughts and flooding because of climate change. Do we want to make it worse?

How stable will a chromium industry be?

There is no shortage of chromite in the world, and its economic viability is determined by the demand for steel (assuming endless industrial growth globally) and restricting supply. Xstrata is the world’s largest producer of ferrochrome, and will essentially ensure that the supply policies continue to favour their interests. The industry will replicate the boom and bust economy we have come to expect from our nickel and copper dependence.

More information can be found at:  http://www.miningwatch.ca/chromium

For resources and local news coverage, find the “Ring of Fire - Chromite Mining in Northern Ontario” page on Facebook.

Links and resources will also be distributed through the Coalition for a Liveable Sudbury e-newsletter which covers local environmental issues, events, and calls to action.  Contact clsudbury@live.com to request to receive this e-newsletter