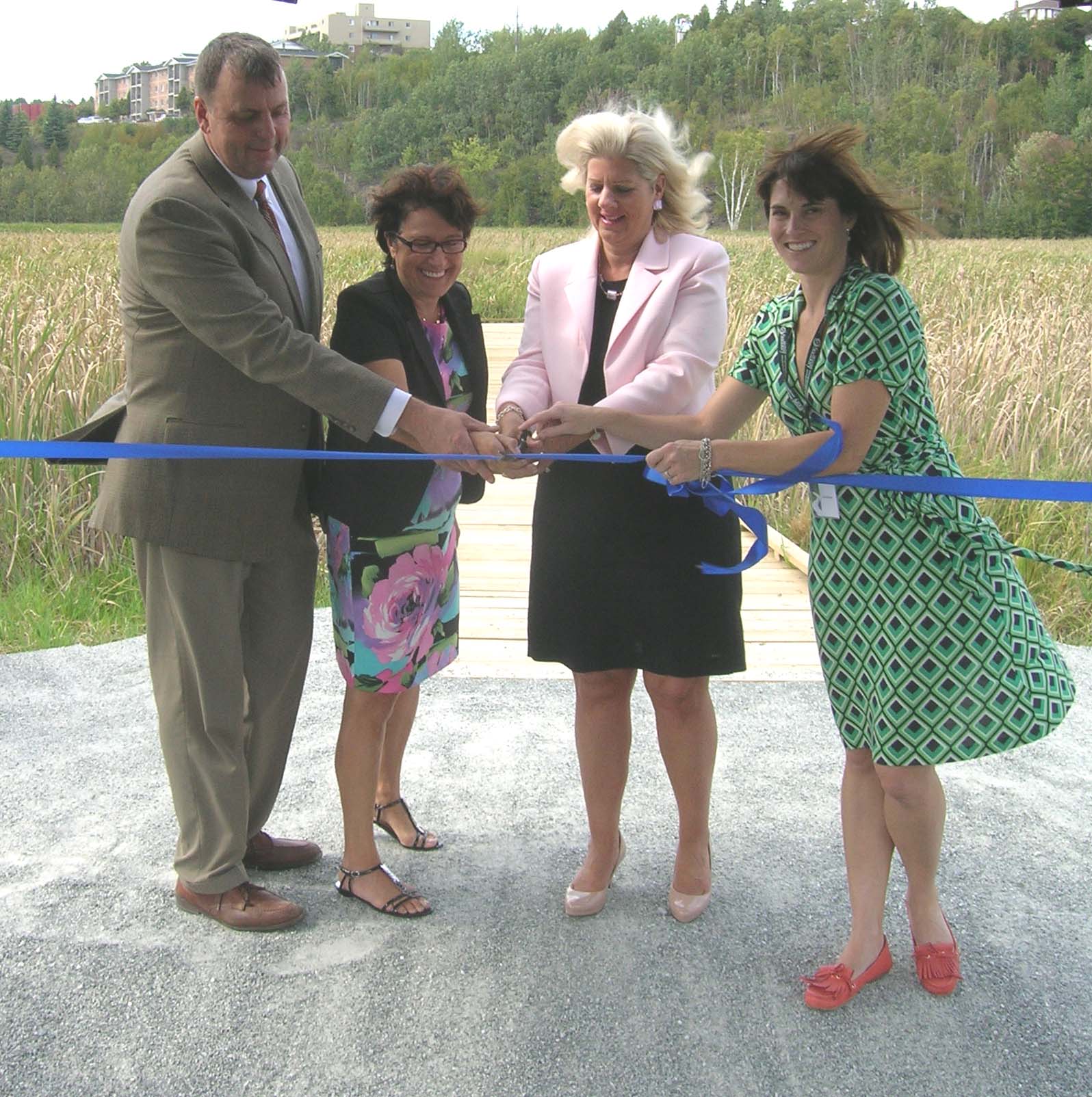 Rainbow Routes Association officially re-opened the Lily Creek Boardwalk at a press conference held on Wednesday, Sept 12 at 2:30pm at the new boardwalk access to the Lily Creek wetlands adjacent to the James Jerome Playing Fields. This floating boardwalk provides the community access into the wetlands of Lily and Nephawin Creeks.

"Wetlands like Lily Creek are important homes to many birds such as red- winged blackbirds and amphibians such as disappearing leopard frogs. These valuable wetlands also hold back water during heavy rains and reduce the impact of floods. The thousands of cattails are nature's filters and they purify water by removing contaminants and storing them in the plant. Such are the basic and crucial functions of a wetland." Franco Mariotti, Science North

The Lily Creek Boardwalk was constructed by Science North over 20 years ago on lands leased from the former City of Sudbury. Last year, that lease came to an end and Science North offered that the funds necessary to dismantle the boardwalk (as per the agreement with the City) be instead used to refurbish and renew it.

Working in partnership with the City of Greater Sudbury, Science North and Employment Ontario, Rainbow Routes removed a section of the old boardwalk, refurbished the remainder and built a new arm that will now connect the boardwalk to the James Jerome Playing Fields. “It is envisioned that football and soccer spectators will take advantage of this boardwalk for a stroll into this “Zen Space” during time outs,” said Rainbow Routes’ president Samantha Baulch.

"The partnerships that made rebuilding the Lily Creek Boardwalk possible are a symbol of the dedication of community leaders to the things Greater Sudburians hold dear," Mayor Marianne Matichuk said. "The leadership shown by Rainbow Routes and Science North to ensure this boardwalk will be enjoyed by another generation is the key to this story," she said.

In order to thrive, Greater Sudbury needs healthy people, a healthy environment and a healthy economy. Rainbow Routes firmly believes that infrastructure such as the Lily Creek Boardwalk contribute greatly to that triple bottom line by promoting active living, reducing motor vehicle use and providing another tourism asset.

In his address to those in attendance, Guy Labine, Science North CEO stated, “Science North is pleased to have been able to participate in the rehabilitation of the Lily Creek Boardwalk. We know it’s an important community resource and want to congratulate the Rainbow Routes Association for leading this project. The repairs and extension that now ties the boardwalk to the James Jerome Sports Complex, will allow even more families and individuals the opportunity to explore the wetland and discover a new walking route in Sudbury’s South End.”

Rainbow Routes Association is grateful to all its partners and looks forward to collaborating with them for many years to come to develop more routes like the one opened today.