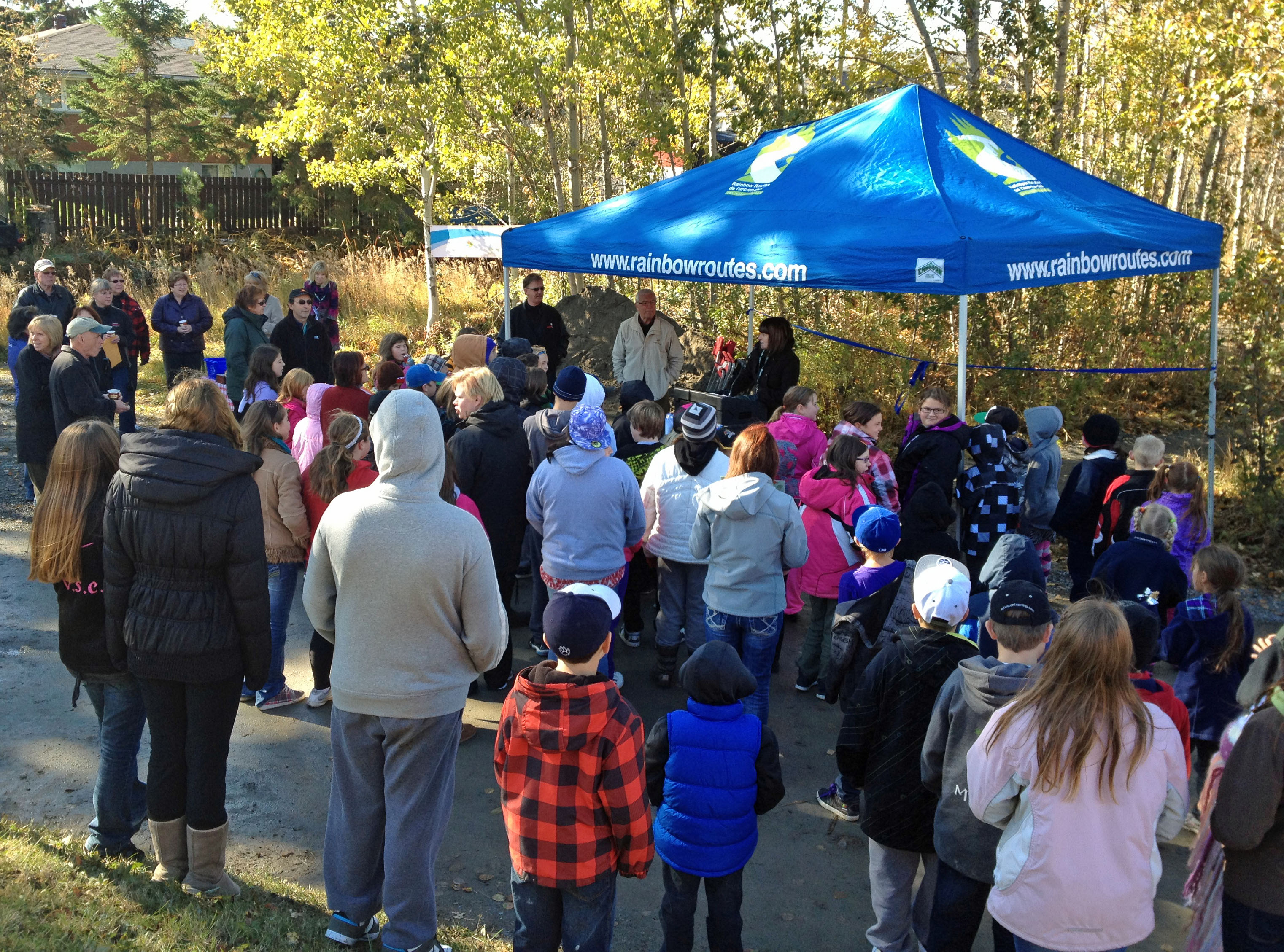 of the Trans Canada Trail

“It is through partnerships represented here today that Greater Sudbury will become the healthy community that we are all working toward, ” said Councilor Doug Craig in his greetings from the City of Greater Sudbury. “This trail will provide opportunities for active living regardless of age or ability. I’ve already heard that students from St. Paul the Apostle and Notre Dame de la Merci are already using this new path to get to and from school, now that is active transportation!”

Classes from the neighbouring schools attended the opening and presented cards of thanks thanking for this new addition to their community. The trail will serve as a recreational and commuter walking path for area residents, and with its close proximity to two elementary schools, will provide the opportunity for outdoor education for students.

“Our Coniston Community Action Network identified this trail project as a priority in our 2008 visioning session,” stated C.A.N. Co-Chair Wyman MacKinnon in his message, “and we are so pleased that what we envisioned 4 years ago is now a reality.”

The Trans Canada Trail stretches across the entire country from East to West to North and South. When completed, it will be 22,000 km in length.  Locally, the trail winds its way from Nairn Centre in the west, through the heart of the City towards Coniston and eventually to North Bay in the east. Rainbow Routes announced at the opening that they have completed 85% of the route through Greater Sudbury and has set itself the goal of being complete by 2015.

undertaken by the volunteer sector in Canada.” said Al MacPherson, Acting General Manager of Trans Canada Trail Ontario in a letter to Rainbow Routes. “We are truly pleased to be able to count on the support of partners like Rainbow Routes Association and we feel equally proud that the Coniston Trail is a part of this national iconic project.”

The community has named this trail Sentier Jean Tellier Trail pending City Council’s approval through the official naming process. Jean Tellier, a resident of Coniston and retired teacher has been the driving force to see Coniston become a part of the Trans Canada Trail. The trail will help provide access to the natural landscape and will contribute greatly to the promotion of active living.

Rainbow Routes’ President Samantha Baulch said, “Rainbow Routes Association is nothing without her partners and community of volunteers. We are continually amazed by the generosity of time and talent from people wanting to be a part of something bigger than themselves, and the number of people behind our trail development projects this summer is truly inspiring.”

This project was made possible in partnership with Rainbow Routes Association, Employment Ontario, Trans Canada Trail,  Xstrata Nickel, the City of Greater Sudbury, the Coniston Community Action Network and local resident Jean Tellier. President Samantha Baulch provided a special thank you to the City’s Parks Department, “Rainbow Routes builds these trails, but it is the Parks Department that keeps them in such good shape and we are all very appreciative.”

The official ceremony concluded with coffee and cookies compliments of Tim Horton’s at the corner of Levesque and the Kingsway and a stroll down the new path.