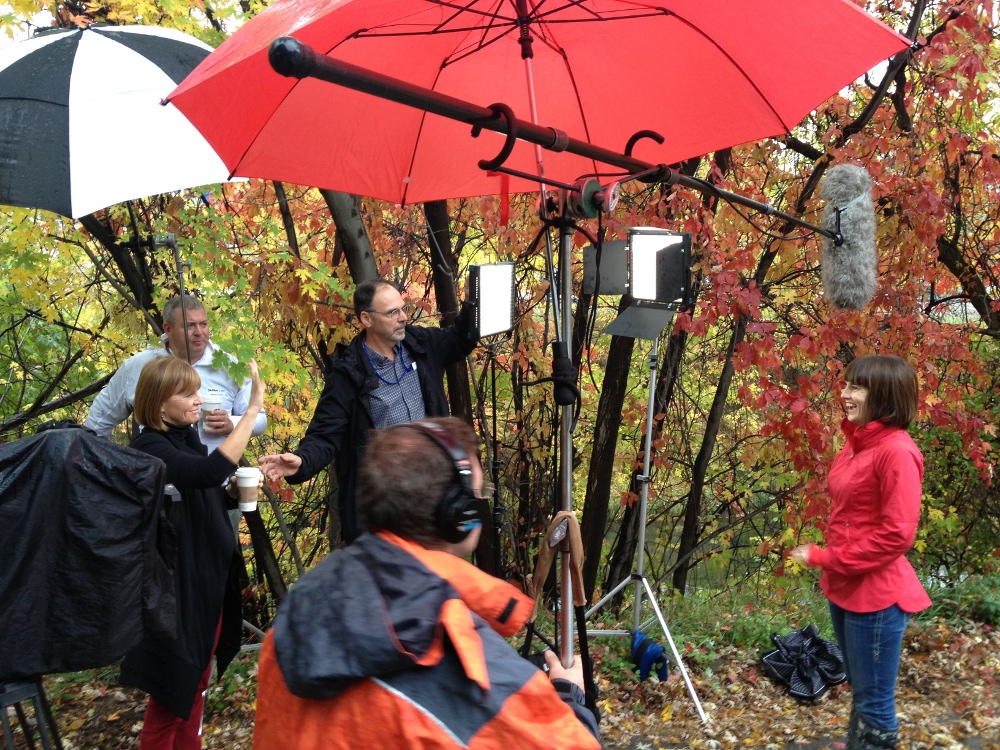 Filming on the Trans Canada Trail

Canadians will soon be able to discover the Trans Canada Trail through Greater Sudbury via an upcoming documentary. During the first week of October a film crew from Shaw Media/Global TV and award-winning television broadcaster Valerie Pringle visited highlights of the Trans Canada Trail (TCT) in Sudbury and interviewed some of the people involved in its development locally.

“Completing the Trans Canda Trail is an ambitious program. Rainbow Routes has completed about 85% of the route through Greater Sudbury and our Board of Directors has set the goal of completing our section of the trail by 2015. We are determined.” said Rainbow Routes Association’s President Samantha Baulch to Pringle during her interview.

Along with representatives from Rainbow Routes Association, Pringle had the opportunity to speak with some volunteers from Canada World Youth who helped build approximately 100 meters of trail.  The team of 20 Ukrainian and Canadian youth volunteers helped to clear weeds, place a culvert and spread gravel. They were working on the section otherwise known as the Junction Creek Waterway Park between Martindale and Kelly Lake Roads which also forms part of the TCT.

In addition to the filming in Sudbury, Pringle and Shaw Media will be visiting other communities across Canada to complete a 30-minute documentary which will air in the Spring of 2013.

“It was easy to choose Sudbury as a location to film this documentary, as Rainbow Routes Association is a great example of a community partner dedicated to completing the Trans Canada Trail” said Pringle during shooting. “These trails are for people who want to walk, commute, get some exercise, get outdoors or go somewhere.”

The Trans Canada Trail stretches across the entire country from East to West to North. When completed, it will be 22,000 km in length and the longest trail in the world.  Locally, the trail winds its way from Nairn Centre in the West, through the heart of the City along the Junction Creek Waterway Park and the Bell Park Walkway towards Coniston and Wahnapitae, and eventually to North Bay in the east.  Pringle is the Chair of the Trans Canada Trail Board.