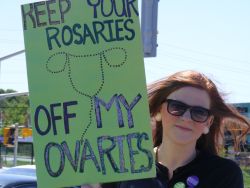 Given the current political climate it is necessary to display our support and perseverance to maintain our rights. Can it be said that we in actuality have a right if we do not have the ability to exercise that right? Though women currently have the right to obtain an abortion, the resources, support services, as well as access to theses services are dwindling due to lack of government support and funding. Women cannot be said to maintain the ability to make decisions regarding their own bodies if they do not have the ability to access services. For this very basic reason, we must ensure that support for women is both constant and visible.

The most recent occurrence of anti-choice groups in Sudbury was June 13th  2011 when the 'Show the Truth' campaign came to Sudbury. Unlike the group which conducts its 40 day vigil, this group uses horrific signs in efforts to display its moralistic stance against abortion. I do not believe it needs to be argued that individuals within the community found these displays horrific as the public outcry spoke for itself, especially with regards to children seeing the images. With this is it clear that the emphasis should be placed upon the nature of the tactics used by this travelling group.

The group states that their images display the 'horrible truth of abortions'. However, the groups displays photos of late term abortions and includes captions to suggest that this is in fact the true appearance of an abortion. Late term abortions occur incredibly rarely as first trimester abortions. 98.7% of abortions in Canada occur before the 16th week of pregnancy [Ed. -- Please note that this stat is currently in dispute and being investigated], and late term abortions are generally only completed if continuing the pregnancy will harm the life of the mother with child, or if it has been determined that the foetus is suffering from an incapacitating illness. As such, the images they display are not the in fact the 'truth' behind abortions: they are simply photos which are use in hopes of shocking others into agreement with their moralistic stance.

Show the Truth  proclaimed to welcome any discussion upon the topic of abortion with the opposing side. It was determined quickly that this was not actually the case. The support of women's choice was seen akin to supporting the Holocaust, and Genocide. It seemed that they could not understand why using those terms was offensive, nor did it seem that they clearly understood the true meanings of such powerful words by using them in this context.

Throughout continued attempts to discuss opinions between the two groups the issues of poverty; and  funding were raised as considerations. Throughout this discussion, some very despicable realizations were made clear. Though the pro-life group proclaims to support life, they also support both capital punishment, and the war in the Middle East. Apparently they do not grasp the hypocrisy inherent in supporting life while they also support the death of others. When the question of addressing poverty was raised, one member of the group provided a very clear opinion regarding how to eliminate poverty, ''kill the poor''.

When the tactics used by 'Show the Truth', being the reliance upon graphic photos, and insults did not function to achieve the intimidation they had wished, they chose to resort to physical intimidation and harassment. Members from the pro-choice group were approached by members of the anti-choice group who proceeded to enter their personal space, yell in their faces, use their hands to nearly hit them, and also refuse to cease doing so when asked simply to ''leave [individuals] alone''.

The pro-life groups which we have seen in Sudbury are not pro-life, but instead anti-choice. The emphasis is placed upon their moralistic, and religious stance towards abortion. In terms of giving birth, there is no choice. Women are expected to carry a pregnancy to term regardless if they wish to do so, and regardless of the circumstances which has led to their pregnancy or the circumstances which will likely befall them if they carry to term.

As we have seen the tactics used by these anti-choice groups have become more and more aggressive. It is now necessary for our community to display a more visible pro-choice presence in local communities as well as in the media. It is important for pro-choice advocate to push back and start educating the general public about the difficult barriers women face in controlling their own bodies.

Pro Choice Sudbury aspires to provide information for this community, to advise the them about events occurring related to women's rights, and to provide support and education. In order to provide a cohesive front for the pro-choice movement in Sudbury, Pro Choice Sudbury was created. For this group to function to its best capacity, we ask anyone interested to e-mail prochoicesudbury@gmail.com so that they may be included to our mailing list.