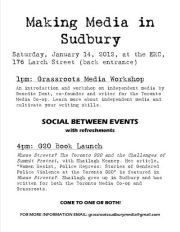 Since early in 2011, a local group has been working hard to bring you a new grassroots media source located in Sudbury (http://www.mediacoop.ca/group/sudbury) but connected to a national network called The Media Co-op (http://www.mediacoop.ca/). We want YOU to write, photograph, report, opine, and blog, and we want you to share your work on our site -- we are most interested in local, original, journalistic writing but we are open to a wide range of material.

We are creating independent media in the North, to speak to our issues and outlooks on our communities as well as the world around us. Independent media provides an avenue for people who are wishing to gain critical perspective on the issues that matter most to us, and to give a voice to those people and stories that you won't find in the mainstream media. And we want you to be a part of it!

To that end, we are hosting two events. One is a way for you to learn about making grassroots media in Sudbury. The other is a chance to celebrate a new book to which a grassroots Sudbury media producer has contributed.

1PM: Grassroots Media Workshop with Geordie Dent, co-founder of the Toronto Media Co-op
Anyone interested in grassroots media is invited to attend this workshop. Learn some of the basics about writing for the media co-op -- gain some skills, get some tips, learn the process. As well, you'll get to hear about how the media co-op model works and the history of the network so far.

SOCIAL with refreshments between events

4PM: G20 Book Launch with Shailagh Keaney
Shailagh grew up in Sudbury and has written content both for the local site and for The Media Co-op more generally. She will be in town to launch a new book called _Whose Streets? The Toronto G20 and the Challenges of Summit Protest_, which includes a piece by her called, "Women Resist, Police Repress: Stories of Gendered Police Violence at the Toronto G20." Come and celebrate the release of this new book and learn about the G20, resistance, and gender!

You are welcome to attend either event, or both!