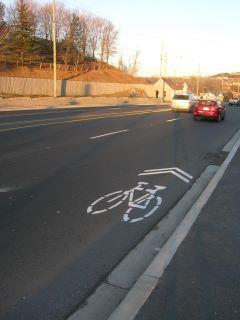 Whatâ€™s that funny looking symbol that is painted on sections of Regent Street? In late November, the City of Greater Sudbury painted its very first sharrows, which caused excitement within the cyclist community in Sudbury.

A blend of the words â€œshareâ€ and â€œarrowâ€, a sharrow is a shared-use pavement marking symbol and consists of two chevron markings placed in front of a bicycle stencil. The general purpose of the sharrow symbol is to indicate to cyclists their correct positioning on the roadway, and to indicate to drivers the position where cyclists may be expected. Sharrows are popular in many countries, including Australia, the United States, Europe and Canada, and were adopted in 2009 by the Transportation Association of Canada for use in Canada.

Sharrows have been around for quite a while â€“ they were originally developed for the 1993 Denver Bicycle Master Plan and are especially popular in the southwestern United States. Since 2006, the list of Canadian cities that use sharrows includes Toronto, St. Catharines, Edmonton, Saskatoon, Winnipeg, Montreal, Moncton, and Vancouver.

They are an integral part of a good cycling infrastructure.

So how is Sudbury addressing the implementation of its cycling infrastructure, including the use of sharrows? It isnâ€™t yet. The city does not currently have any official plans that deal with cycling infrastructure. And it isnâ€™t clear as to why these sharrows were implemented on only a small section of road, and in isolation. At a recent Rainbow Routes Association Annual Meeting, David Shelsted, Acting Director of Roads and Transportation, was asked what other changes are forthcoming. He did not answer the question, other than to say that there is still some money left in this yearâ€™s budget that could be used for additional work.

Changes may be coming, though. Within the past two years, two city advisory panels submitted reports to the city with recommendations that have yet to be addressed or implemented.

The Sustainable Mobility Plan was developed by Rainbow Routes in 2010, and it details, among other things, a broad vision for a safe and attractive bicycle transit system.

Early in 2011, The Bicycle Advisory Panel presented a Bicycle Master Technical Plan which reviews every road in the Greater City of Sudbury, and makes individual road recommendations for implementing specific safe cycling initiatives. That group has since been disbanded.

As noted in the planâ€™s introduction, â€œThe 2010 Sustainable Mobility Plan (SMP) for the City of Greater Sudbury rated bicyclist safety, weather, lack of secure bicycle parking and lack of access to a bicycle as the top barriers to bicycling by survey respondents. Thus, the Bicycle Advisory Panel recommends that these barriers be addressed by: building a safe and practical bicycle network on key roadways; encouraging secure bicycle parking; working with community organizations to loan bicycles to low-income individuals; and, educating motorists and bicyclists on how to share the road and operate both vehicles safely.â€1

Cyclists hope that recommendations in these two reports will be officially incorporated into the cityâ€™s Official Plan.

Weâ€™ve been waiting for a while for the city to address our needs. To date weâ€™ve seen some great multi-use trails, mainly due to efforts from the Rainbow Routes Association; a few bicycle lanes in the city proper; and now these new sharrows. None of which connect to each other. Sudbury needs a systematic approach to building a good and safe cycling infrastructure.

There is much debate amongst members of the Sudbury Cyclists Union as to what is the priority in building that infrastructure. The SCU is a coalition of Sudbury area concerned citizens and cycling enthusiasts. With over 225 members, the groupâ€™s mission is to encourage cycling for people of all ages who love to bike for commuting or recreation, to build a better cycling culture and climate in Sudbury and to advocate for the rights of all cyclists.

Some members want dedicated bike lanes, especially on the main arteries like Lasalle, Barrydowne, Paris and the Kingsway. Some are advocating converting arterial boulevards to bike lanes - boulevards are the raised paved sections beside sidewalks, typically used by the City for access to below-ground services located next to roads. Some want to cycle on sidewalks â€“ which is currently illegal in Sudbury â€“ because they feel roads are too dangerous for cyclists.

Is Sudbury really dangerous to cyclists? Many citizens would say â€œyesâ€.

Posts fly on the SCU Facebook site whenever there are cycling accidents reported in the media, and especially lately given the recent deaths of two cyclists in Ontario cities. We are very much aware that cycling can be dangerous in urban environments; in fact, so much so that the Ontario Coroner is currently in the process of reviewing cycling deaths across Ontario.

SCU members post incidents describing Sudbury drivers who honk at them to get out their way, who make rude gestures towards them, who shout at them to get off the road, and who drive dangerously too close to them. Some have been driven off the road and been hurt in hit and run accidents.

Thatâ€™s not to say that all Sudbury drivers do these things. Many are courteous towards cyclists. But many are not â€“ and they make Sudbury dangerous for cyclists. Weâ€™re just waiting for something tragic to happen here, as it did when Sophie ManarinÂ was killed on a training ride in 2001. In our minds, the number one priority for encouraging cycling in Sudbury is to address cycling safety.

Cyclists world-wide agree that bike lanes are best to ensure their safety. But sharrows are an acceptable alternative when bike lanes are too cost prohibitive, or as an interim measure until bike lanes can be built. In the absence of bike lanes, sharrows indicate that drivers and cyclists alike must safely share the lane. They remind drivers that cyclists are there and deserve consideration and a share of the road. Properly implemented, they reduce the chance of a bicyclistâ€™s impacting the open door of a parked vehicle. They help cyclists understand when to ride in the center of a lane that is too narrow for a motor vehicle and a bicycle to travel side by side in the lane. They warn drivers of cyclist activity. They encourage the safe passing of cyclists by motorists. And they reduce the incidence of wrong-way bicycling.

So, will the Regent Street sharrows make cycling safer on that road? While itâ€™s great that the city has put the sharrows in, they appear only on a small section of Regent Street, and abruptly disappear at Bouchard Street. There is also no accompanying signage to confirm the use of the symbols. And the symbol is painted very close to the curb, in a lane which is 3.8 m wide.

The shared use side-by-side application is intended for use on lanes which are wide enough for
side-by-side cyclist/driver operation, but not wide enough for bike lanes. If the roadway carries transit vehicles or trucks then at least 4.3 m width is required for side-by-side operation in accordance with already established TAC guidelines. On roadways without on-street parking, like Regent Street, the sharrow should be placed so that the centre of the marking is 1.0 m (with a minimum of 0.75 m) from the edge of the curb. Speed limits should be 60 km/h or less. And the recommended signage to accompany sharrow markings in side-by-side applications is the Share the Road sign. However, the width of Regent Street does not fit this application.

The shared use single file application is intended for use on lanes which are too narrow for
cyclists and drivers to operate in a side-by-side manner. For single file applications, the sharrow
is placed in the centre of the lane if the lane is less than 4.0 m wide. Speed limits should be 50 km/h or less. And the Shared Use Lane Single File sign is used to warn motorists and cyclists that cyclists are
allowed full use of the lane ahead and to warn motorists that the lane is too narrow for side by-side operation. According to its width, this is Regent Street â€“ except the speed limit is 60 km/hr and the sharrow is painted less than 1 meter from the curb (not in the centre of the lane).

Conflict zones are defined as areas where cyclists have the right of way, where this may not
be understood by motorists or even cyclists. Examples include the merge or diverge point
associated with a right turn channelization island, where conflicts could occur between moving cyclists and turning drivers; and guiding cyclists through complex intersections or left hand turns.

So unfortunately, our first sharrows donâ€™t meet TAC specifications. And cyclists who are taught proper lane positioning in courses like the Canadian Cycling Associationâ€™s CAN-BIKE training will be confused by the current lane markings.

As more and more Sudburians start to embrace cycling as a healthy lifestyle, as an economical mode of transportation, and as just plain fun, it is good that Sudbury wants to encourage cycling.

Letâ€™s implement in a proper way though. Letâ€™s make sure that the lane positioning is proper and that signage is erected at the same time as the markings go in. Letâ€™s get an education campaign going so cyclists and motorists understand the use and meaning of the markings.

The SCU is encouraged to see that Sudbury is joining the ranks of many Canadian cities who are building great cycling infrastructures. We look forward to seeing formalized plans as part of the cityâ€™s Official Plan review and hope to see a coordinated approach to implementing bike lanes and sharrows â€“ maybe even as early as next spring.

If youâ€™re interested in supporting a great cycling infrastructure in Sudbury, come to the first public input session of the cityâ€™s Official Plan review, which is scheduled for January 23, 2012, at 7:00 p.m. in Council Chambers. The SCU, on behalf of Sudbury cyclists, will be making a formal presentation at that meeting.