No One Arrested at Keystone XL Protest in Halifax.

No One Arrested at Keystone XL Protest in Halifax. 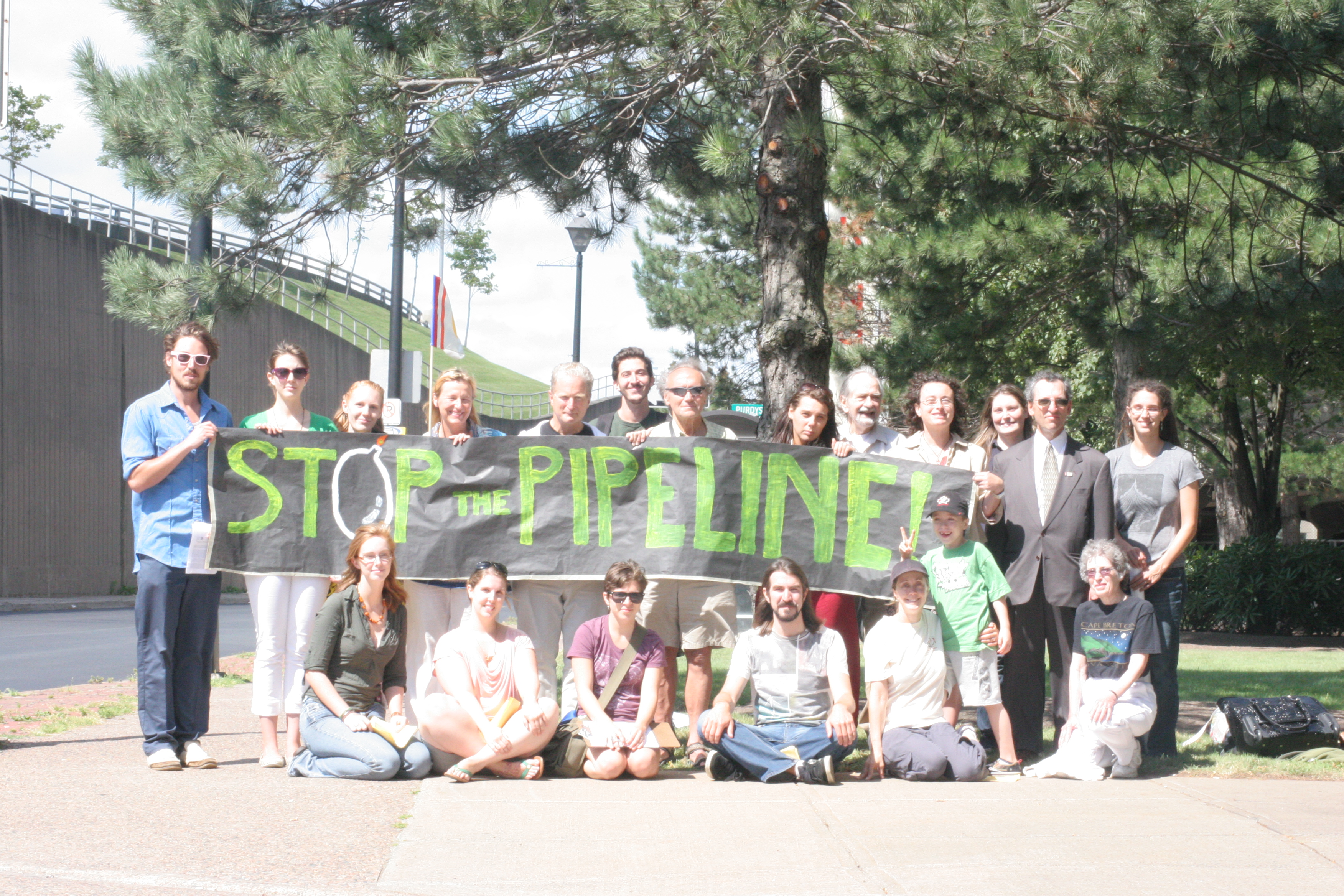 HALIFAX, NOVA SCOTIA - On Friday, September 2nd, approximately 20 protestors showed up in front of the US consulate's office, located in Purdy's Wharf, Tower II. The protestors were there to show solidarity with their American counterparts, who for the last two weeks have been staging sit-ins on the sidewalks in front of Capitol Hill, in Washington, DC, in an attempt to halt the approval of the proposed Keystone XL pipeline. On Capitol Hill, over 1,000 protestors have been arrested.

The proposed Keystone XL would add approximately 2,600 kilometers of pipe to TransCanada's existing Keystone pipeline, which currently ships a capacity of 435,000 barrels of tar sands bitumen per day southwards, to American refineries. If Keystone XL is approved, TransCanada claims that capacity will be able to be increased to 1.3 million barrels per day.

Protestors worry that the proposed Keystone XL pipeline will cross over at least 70 waterways, including the Ogallala aquifer, source of clean water to approximately 20 million Americans. The Ogallala also provides water to about 1/4 of America's arable land. It is the water source for America's breadbasket. Protestors' worries for the irreplaceable Ogallala seem well founded, based on the fact that the existing Keystone pipeline has leaked 12 times in only a year of operation.

Proponents of the Keystone XL, Canadian Ambassador to America Gary Doer included, laud the job creation aspect of the pipeline. America is knee-deep in it's own depression, and the dangling carrot of several thousand jobs may well be enough for President Obama to close the door on his earlier promises of a 'greener' economy. There is a presidential election looming, after all, and with many Republicans viewing climate change as scientific snake-oil, this election will be won or lost on promises of jobs, not solar panels.

The current Keystone pipeline serves as far as Illinois and Oklahoma. The proposed Keystone XL would go as far as Houston, and Port Arthur, Texas, and the Gulf of Mexico beyond. With ongoing, indigenous-fueled, stalling to the Northern Gateway Pipeline (the proposed pipeline that would connect the tar sands to the Pacific Coast, and the lucrative Asian markets), it is at least plausible that the Keystone XL isn't all about weaning America off the nipple of 'unethical' oil, the line being sold to 'Joe America', and is more about getting Alberta crude to a port with fewer environmental sensibilities.

As for the protests in Washington, at least as a consciousness-raising effort, they must be considered a success. Much of this can be attributed to the methodology of using mass arrest as a publicity stunt. Daryl Hannah, Naomi Klein, and a thousand others, being arrested outside of Capitol Hill, does not in itself affect President Obama's decision on the Keystone XL. Not when there's venture capital and lobby groups in the mix.

Hannah in handcuffs does, however, make for news. A cursory glance at Keystone-related news-pieces of the past two weeks reveals a media fascination with people willing to be peacefully arrested, en masse, for this cause. The cause itself, fear for clean water, fear of the tar sands, and fear of unaccountable Obama, is given otherwise unobtainable media attention in a newsroom gone jaded.

In distant Halifax, a solidarity protest in which protestors deferred to the requests of a concierge to 'get off the grass', garnered media attention from local mainstream television and newspaper. Subsequently, the Keystone XL issue made it to the pages of 'The Chronicle Herald', the local newspaper. The article linked the Halifax protest to the DC protests and the mass arrests, without which another 2,600 kilometers of pipeline crossing North America simply is not a mainstream story.

The decision to be, or not to be, arrested, is not one to be taken lightly. However, the media success of the Keystone XL protests in DC, and the piggy-back protest here in Halifax, suggest that mass arrests are more of a media phenomenon that complacent protest. Whether or not either will reach the heady realms of the oval office remains to be seen.