Does the Climate Movement Need Democracy?

Does the Climate Movement Need Democracy? 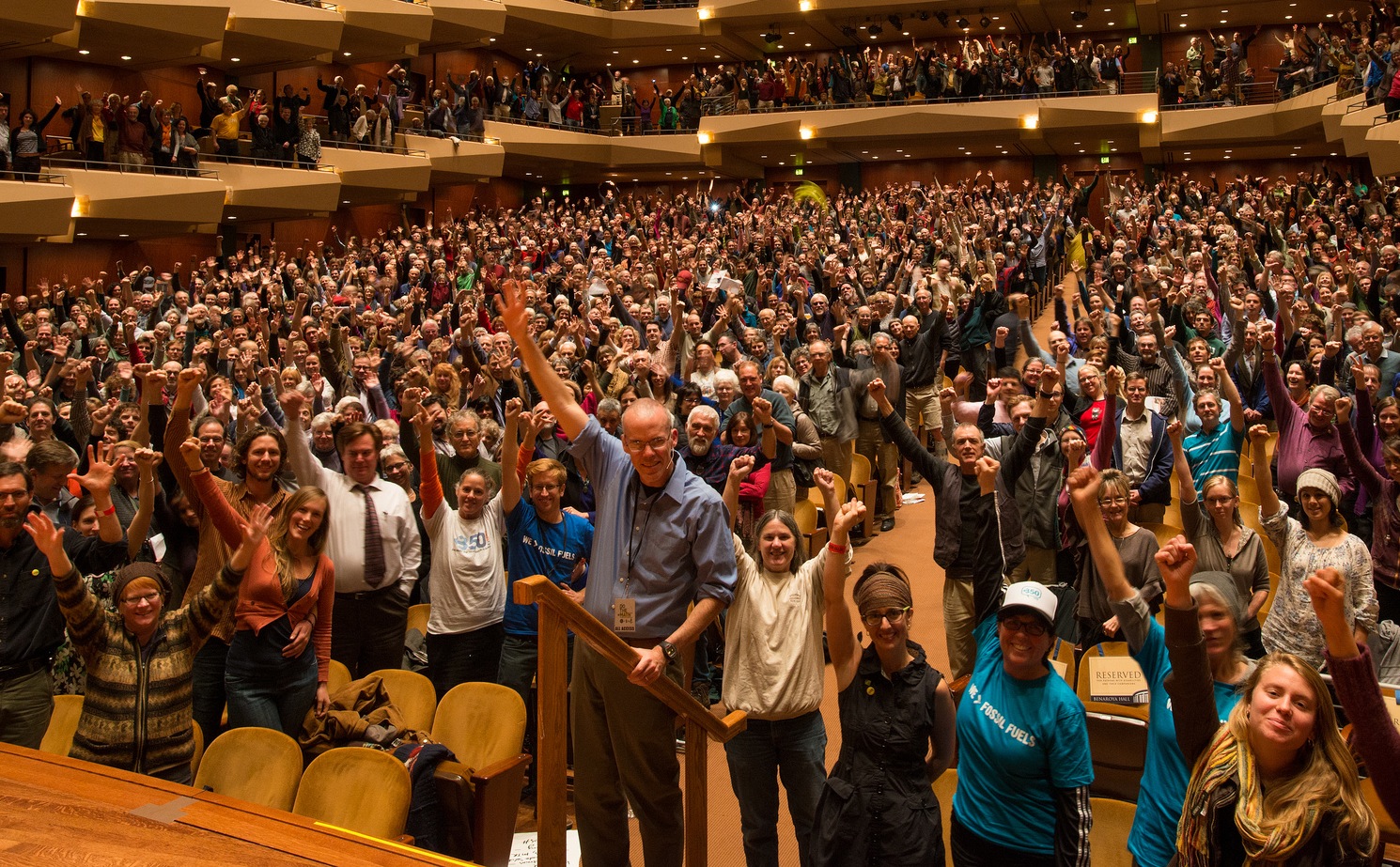 On September 3rd, I attended the only Canadian stop of the People's Climate Tour at Montreal's Concordia University. Many gathered in the auditorium to witness a skit by climate justice activists, a photographer's powerful images of communities who will be facing the brunt of the Energy East Pipeline, and speeches by anti-racist activist Shaina Agbayani, human rights activist from KanehsatÃ :ke Ellen Gabriel, and founder of 350.org Bill McKibben.

A range of emotions could be observed in the crowd. Some people smirked and participated in the opening song about climate justice, while others watched with intensity, absorbing every word. As McKibben took to the stage to finish off the event, an audience member, Amanda Lickers, interrupted him toward the end of his speech. She expressed that 350's campaigns aren't addressing pertinent issues relating to Indigenous rights and capitalism.

"If we cannot understand justice as so deeply tied to the processes of colonial and capitalist violence, then we will never achieve that dream [of justice]," said Lickers. Audience members' reactions diverged. Some nodded their heads and cheered, while others frowned, impatiently waiting for her to finish.

Perplexed by the mixed reactions and the tension that seemed to surround 350's work, I decided to sit down with 350.org's Canadian Tar Sands Organizer Cameron Fenton for a chat about the climate justice movement and where it's going.

For two years, the fossil fuel divestment campaign has been urging public institutions to divest from the fossil fuel industry. It is currently one of the best-financed climate campaigns. I started off by asking him how much money divested has been reinvested into eco-friendly projects.

"There's nothing that I can point to and say this has happened," he said, but went on to explain that 350 has been working with the Climate Justice Alliance in the United States on reinvestment strategies, and how they can challenge the current economic paradigm. Right now, he explained, this is just an ongoing conversation, but the idea is to reinvest money divested from the fossil fuel industry into various projects such as those that could create "food sovereignty and energy independence in communities", he said.

Bill McKibben is an American environmentalist and the founder of 350.org. He is the de facto leader of the divestment campaign.

Some beg to differ with 350's choice of strategy, saying that McKibben doesn't challenge "the system of industrialized capitalism."

Critics have argued that market-reform proposals, including divestment, do not change the prevailing system that continues to profit by exploiting people and the Earth at a damaging and unsustainable pace. "Whether it's driven by fossil fuels or biofuels or even massive solar and wind installations, the system will continue to devour ecosystems, displace forest-based communities, Indigenous Peoples and subsistence farmers from their lands, crush labor unions and generally make life hell for the vast majority of the world's peoples. That is what it does," said Anne Petermann in response to McKibben's noteworthy article "Global Warming's Terrifying New Math."

I asked Fenton what he thought about that. By divesting from the fossil fuel industry, he said, "we're targeting the single largest concentration of wealth on our planet, arguably capitalism as it exists today."

"This isn't a hyperbole," McKibben told the crowd during his speech. "Exxon made more money last year than any company in the history of money!" he proclaimed.

At the beginning of the year, McGill divestment organizers acknowledged in an interview with Briarpatch magazine that divestment "is more about symbolism than financial impact." While the intention may be to challenge the biggest moneymaking industries on the planet, in practice so far, the divestment campaign has remained more theoretical - a PR campaign to strip this industry of its social license, rather than an effort that threatens its wealth accumulation.

That being said, 350's strategy doesn't just stop at divestment. Fenton said, they've used "the megaphone of 350" to support direct intervention tactics such as blockades against Line 9 where members of a local 350 group participated in a solidarity blockade. Currently 350 in Australia is engaging with more direct tactics in solidarity with the Pacific Climate Warriors to block coal exports. The Pacific Islanders are the Indigenous inhabitants of Oceania. For over twenty years they have been defending their homeland from the Australian government's continuous fossil fuel extraction on their lands. Next month, they will be journeying to Australia to stop coal exports for a day.

Whether or not 350's campaigns go far enough in fighting climate change, we're living on a warming planet. Divestment, at the very least, raises awareness about the climate crisis and moves us in the direction that 350's left critics want to go, even if it doesn't go far enough according to some. Reading through the many criticisms, it seemed to me that the underlying issue is something like trust. People don't have confidence that 350's leadership will make the right decisions, now or in the future.

Demanding democracy by practicing it

Back at the anti-pipeline presentation, Ellen Gabriel raised concerns about Canadian democracy. "They have taken your democracy away and sold it to Enbridge, to TransCanada, to Rio Tinto, to the fracking companies" she said, blasting the Canadian government's inaction toward climate change.

Gabriel's polemic implicitly raises a deeper question: does a movement that demands democracy need to be democratic itself? If we're mad that our governments can sell our rights to Enbridge, as Gabriel put it, shouldn't we be wary that can occur within the movement? If governments are subject to the democratic process, we should be placing ENGOs to same standard.

Despite the importance of 350's work, structurally they differ from groups that played a similarly central role in movements historically. Organizations like Students for a Democratic Society, the Global Justice Movement, and CLASSE during Quebec's Printemps Ã‰rable all had formal participatory decision-making processes. The student movement in Quebec acted under the principles of direct democracy as a means of collective decision-making. Power was devolved to student assemblies, and elected executives could pass motions. While there are other models in place to allow for more democracy, perhaps the vast opinions and critique about 350 could be addressed through a more participatory structure.

If the speaker's event was followed by a general assembly, would there be so many hostile looks when an audience member tried to express their opinion? Would more people feel invested in the strategy? 350 plays a leadership role in the environmental movement, and the decisions its leaders make affect all of our efforts. But avenues for the people who are carrying out their strategy to take part in the decision-making processes of the organization are largely missing. While a lot of 350's efforts are admirable, operating in consultation with or on behalf of communities should be backed up by institutionalized accountability.

If 350 actually implemented a binding democratic framework, accountability and transparency would go beyond rhetoric. Perhaps institutionalizing a process of representation from communities could curb skepticism and critique. There is a need to change the blueprint, or create institutional shifts in the structure of ENGOs in order to create an inclusive mass movement.

With operation on a global scale, this would scarcely be an easy task for 350. There are, however, easy-to-implement starting points: engaging with people through referendums on key decisions, or creating a mechanism whereby people can introduce motions to be voted on would give people more agency within this large ENGO than they currently have.

Some have argued that McKibben "is not a good spokesperson for the climate movement". Others are angry about where 350 gets its funding from, and how that affects their work. These are issues that people who are actively involved in the climate movement should be able to have a say over. Inclusivity of stakeholders gives people more control and serves common interests.

Given the urgency of the effects of climate change, the structures and campaigns that are leading the environmental movement need to be dealt with now. 350.org is one of the most prominent ENGOs leading the movement toward climate justice. They have mobilized thousands of people across the globe to act against climate change, but it is time for them to take the next step and give the power back to the people who have made them so successful.