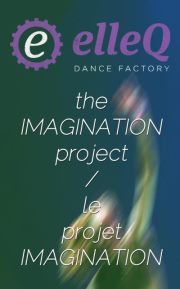 A review by Rachael Charbonneau with John Newlands

The Imagination Project is the integration of original music composed by Matt Foy and original dance choreographed by Lauren Pero. For the purposes of this review, the score and the choreography will be treated separately.

The industrial, reminiscent-of-oppression nature of Matt’s score was enlightening. The politics of the music were immediately reassuring. It seemed to implicate the unsustainability of industry and how nature desperately needs our protection.

The score, though often industrial in tone and mechanical in execution (one piece features a roll-your-own music box), was essentially psychedelic. That is to say, it reflected psychedelic music in its original form, where intuition, artistic freedom, and humour take precedence over formal musical structures. This was an exploration of sound beyond the familiar tonal qualities of traditional instruments.

I experienced the music as one piece, a score. The dances, however, proceeded very much like tracks on an album.

The long pause at the beginning of the performance came from a very strong and assertive place. Lauren commanded attention in a way that reminded me of how strongly art must be asserted in our culture in order to counter constantly compounding diversions. Indeed, Lauren’s choreography often saw dancers performing non-synchronized movements which reflected our culture of chaos—its fracture and disorganization.

In the first piece, I felt the costuming was particularly liberating. Lauren transformed the rigid form of a tutu into a fluid flounce on a blouse paired with comfortable pants. Her commitment to relaxed forms was noteworthy and instructive. Contrastingly, Lauren choreographed the dancers to become string instruments in a compelling sequence.

My favourite sequence of movement was when dancers lay on their backs with their knees up, taking steps backwards to slide stage right. This movement translated the action of raindrops on a window; it also evoked the imagery of chains, thereby capturing an intriguing dualism. My second favourite movement was what I will call the “silent heartbeat.” This choreography represented an exquisitely quiet reminder that our actions on this planet should be synchronized with the planet’s natural limits.

My favourite piece, or track, is the one I will call “the deer track.” I felt like this piece celebrated every single magical moment I’ve ever experienced in nature: a lifetime of my own secrets with the universe. This piece reminded me of the importance of possessing and experiencing awe. Awe is an endangered, nearly extinct cultural trait. The importance of this cultural trait cannot be underestimated or lost, and this glorious choreography, executed exquisitely by both Lauren and Jenny Hazelton, implores us to reconnect with our awe of nature.

Now that I’ve mentioned Jenny Hazelton, it is time to say that she was a stand-out, absolutely enthralling in both of her performances. What a delightfully entertaining artist! I feel the quality of Jenny’s performance reflects on Lauren’s integrity as an artist as well. Lauren had to know there was a strong possibility she could be upstaged by Jenny, but she was fearless about collaborating with her and that fearlessness put Lauren’s performance exactly where it needed to be. Bravo!

Anita Ansamaa designed both the Butterfly Dress and the Buck Antlers for “the deer track,” which were ravishing. The Buck Antlers in particular demonstrated perfectly Anita’s unique brand of keen and insightful creativity. Anita’s understanding and interpretation of splendour were key to her creations.

My second favourite piece, what I will call "the rabbit track," was riveting. Enthusiastically and spellbindingly performed by Jenny Hazelton and France Huot, this piece established a warning about amusement, that we consider carefully what amuses us in the event the tables are turned.

Overall, if I had to choose one word to characterize Lauren’s choreography, it would be: rebellious. It rebels against stereotypical male desire; there is no “T&A” in her choreography. In this way, Lauren courageously promotes a non-objectified status for women and simultaneously encourages her dancers to be serious artists. Lauren’s choreography celebrates women’s solidarity, their compassion, care and love.

Lauren’s choreography also rebels against refinement and precision. In the beginning of the performance I felt preoccupied with the lack of precision, but Lauren’s choreography challenged me to be aware of what I regarded as credible movement. As I explored this challenge, I experienced an extraordinary sense of inclusiveness and openness. This made me wonder how many things that over-emphasize precision and uniformity have the effect of making us feel closed, as individuals and as a community. I became intrigued by Lauren’s perspective of unsteady movement as credible and human. And how could this not be true? I feel like I’m nearly always moving unsteadily through my life. Precision and uniformity are really only desirable in the military, and I appreciate Lauren’s rebelliousness against this dominant construct. I have a sense that perhaps in dance culture, technique becomes too dominant a force and that Lauren’s work attempts to redistribute the joy-to-precision ratio of conventional professional dance. I know from living with an artist that this choice often needs to be made. If precision is chosen over joy too many times, art becomes compromised. In this way, Lauren chooses to advance the art form rather than the methodology. I respect both Lauren and Matt’s attempt to reclaim less mechanical artistic terrains, again primarily for its rebellious nature. In particular, for prompting me to reconsider the possibilities for being rebellious without being confrontational.