My Letter To Rob Ford

My Letter To Rob Ford 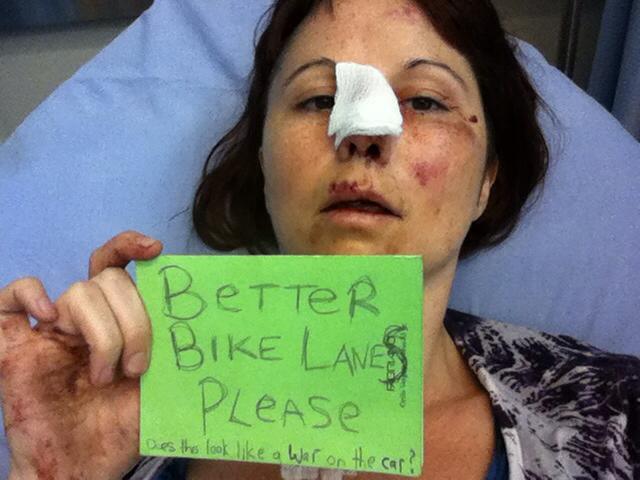 As the mayor of this city, you are charged with the safety and concern of all its people, not just the ones you like or identify with. I am a cyclist who has suffered an accident because there was no bike lane for me to ride in. Right after the accident, good people got out of their cars and helped me to the side of the road and stayed with me while we waited for the ambulance to arrive. I was quite shaken up and these perfect strangers showed me a world of compassion. The police that appeared on the scene deemed that neither they, nor myself were at fault for the incident, but that a bike lane would have avoided the whole thing.
The response time for the emergency services was excellent, as well; the personnel were kind and very professional. Im glad this city still spends tax dollars on these life saving services.
I arrived at the hospital and was waiting for a bed to become available, and as I lay there, still bloody, with my tooth in a rubber glove beside me, I thought of your words. I thought of the fact that according to you what happened to me was my fault and that if I had died, as many have before me, that you wouldn't lose a wink of sleep and you would have blamed me, simply for trying to bike in this city.
I am taking the time to write to you, because I have just been through a near-death experience and it has provided some clarity on what is really important in life.
Whether you have been a decent mayor is not what I want to discuss; what's more important is whether you have been a decent human being. You have decided that cyclists are not a concern to you, and you have made up a paranoid delusion that there is a 'war on the car' and made other people believe it. You believe that 'car' people and 'bike' people are somehow different classes of people and you have done what you can to pit these groups against each other. Worst of all, you have forgotten what it means to be a compassionate loving person, capable of empathy and remorse. I really think you should take time out of city politics to get back in touch with these qualities--the qualities you claimed to have when you were elected. You think the world is dog eat dog (and you are trying to be the biggest, baddest dog out there). But the truth is, that is not the case. People haven't launched a 'war on the car', but you have spun fear into the hearts of drivers and bikers alike, making them think there is.
What I witnessed after my accident reflected the exact opposite reality. Folk came together and helped me in my time of need. No one thought of each other as 'car' or 'bike' people, just as people, sharing this experience of living in this great city of Toronto, and willing to help each other when we are down.
I am still recovering, but I will be getting back on the road. This has not deterred me from wanting to get around this city on bicycle; most of the time it is a healthy and environmentally friendly option to get around and I urge you to try it. If you did I'm sure you would see how badly more bike lanes and better education for drivers is needed so you can get around safely. That Toronto Sun journalist certainly did.
Respect for cyclists isn't a new idea. Many cities around the world have far better infrastructure for cyclists than Toronto does. It has been proven that better infrastructure for cyclists lowers accident rates and improves driving time for cars as well.
Please prove my friends wrong and show that you do indeed have a brain, and a heart, and that both are operating in good condition.
Here's hoping you take a minute before reacting to truly hear what i have said.
See you on the road. Please don't be on your phone or reading some reports, or giving the finger to mothers and their children - you might miss me.
Taylor Flook

update: I received this letter from Mayor Ford's office in response. It stands in stark contrast to the outpouring of support I have since received online.

Thank you for contacting the Mayor’s Office
The Mayor cannot act on, comment on  or adjuciate claims made against the City of Toronto. The City’s insurance adjusters  Granite Insurance – adjudicate all claims against the city.

Making a Claim against the City of Toronto
http://www.toronto.ca/finance/insurance_claims.htm
If you believe that the City has been negligent in its maintenance of City facilities, roads, trees and sewers, which has caused bodily injury or damage to your property, you can file a claim against the City of Toronto.
What you should consider when making a claim
Any damage to your property can be upsetting and disruptive; however, it's important to know that the City of Toronto is not your insurer.
If you have auto or property insurance, we suggest you consult your insurance company or broker first, for advice on how to deal with your loss. Your insurance coverage may be more extensive than what you can recover from the City.
If your insurer believes the City is responsible for your damages they may seek compensation against the City on your behalf.

A complaint may be made in a number of ways:
•       Verbal complaints are made by telephone to our General Inquiry line at (416) 397-4212.
•       Written complaints may be made by filling in a complaint form and submitting it by mail, fax or e-mail:
•       By Mail:
Corporate Finance Division
Insurance & Risk Management - Claims Complaint
5th Floor, East Tower, City Hall
100 Queen Street West, Toronto, ON, M5H 2N2
•       By Fax:   416-397-4555
•       By e-mail:  irmcomplaints@toronto.ca
Your complaint should include the following:
•       Contact details of the complainant
•       Summary of the complaint (details, location, staff involved, resolution requested, enclosures, date complaint submitted)
•       Type of the complaint
•       Desired outcome
Note: The complaint process is not intended to deal with the outcome of your claim (e.g. a denial or settlement amount). The insurance claims process involves you (the claimant) and the Granite Claims Solutions insurance adjuster assigned to act on behalf of the City's liability insurance policy. If your claim has been denied, your remedy is to seek independent legal advice.

As noted under Insurance Claims above, the City's insurance adjuster pays only when the City is legally liable which is determined by them considering your proof of claim.

The City's insurance adjuster's assessment of your claim is final and it can only be reviewed by them if you can provide additional relevant evidence to support your claim which was not considered by the adjuster originally.
Best Wishes