"Real justice for all": prisoners speak out against Harper crime bill

"Real justice for all": prisoners speak out against Harper crime bill 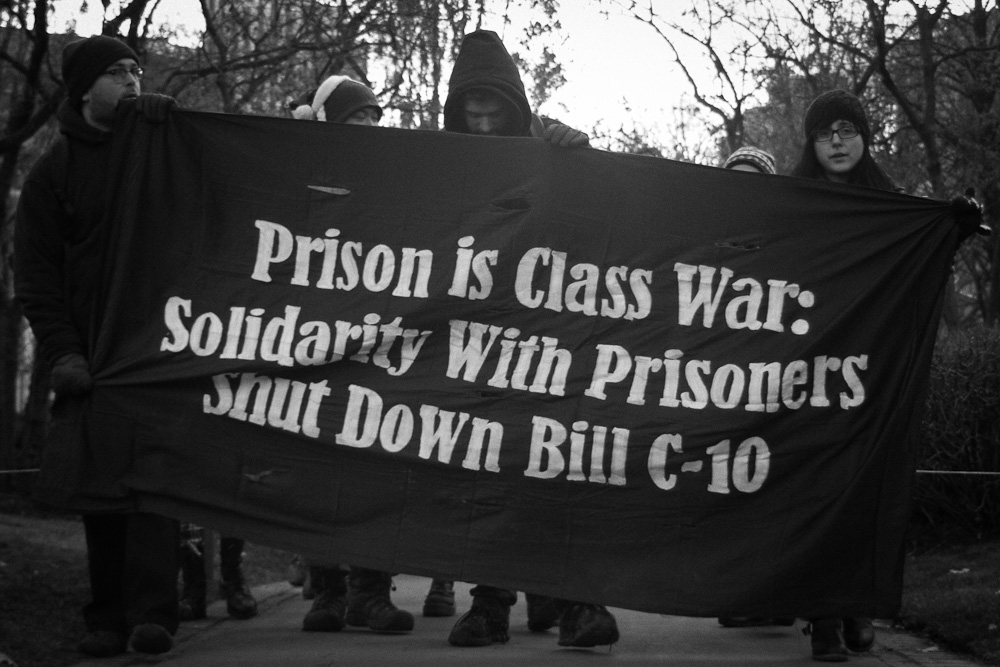 This open letter was released today, signed by prisoners inside the Central North Correctional Complex in Penetanguishene, Ontario and the Vanier Centre for Women in Milton, Ontario. Prisoners' Justice Day is on August 10th. You can read other writings from Alex Hundert and Mandy Hiscox about their time inside here https://alexhundert.wordpress.com/ and here http://boredbutnotbroken.tao.ca.

On Prisoners’ Justice Day in every jail in Canada and in prisons around the world inmates will go on a 24-hour hunger strike.

We do this to remember Eddy Nolan who died in Millhaven Penitentiary in Ontario on August 10 1974 as a victim of the inhumane conditions in that prison at that time. We do this to remember all of the inmates who fought and the two who died in a four day riot in April of 1971 at Kingston Penitentiary. Both of those incidents led to major reforms in the Canadian prison system. We fast so that we ourselves remember. We strike to remind the institutions and the world that even behind bars we are still entitled to human rights and human dignity, and we can still fight for both.

This statement for Prisoners’ Justice Day 2012 was written by Alex Hundert, with input from more than a dozen inmates inside the Central North Correctional Complex in Penetanguishene Ontario, and Mandy Hiscocks at the Vanier Centre for Women in Milton Ontario. Both are provincial jails in Ontario, Canada. This statement has been signed so far by 56 inmates in Penetang and Vanier, which is 100% of all of those who had the opportunity to read it. Most of those at Penetang who provided input into the very first draft of the statement were unable to sign onto this final version as they were, for reasons unrelated to the drafting of this statement, either moved or are now in the hole (administrative segregation).

It is an outrage that the federal government is enacting the first measures of its Omnibus Crime Bill C-10, the so-called ‘Safe Streets and Communities Act’ on August 9, just one day before the annual Prisoners’ Justice Day. This bill will only serve to make prisons more crowded and will make our prison system even less about justice than it currently is. We want people to know how bad things already are before they get worse.

In provincial jails in Ontario we have no functional protections for our human rights the way that federal penitentiaries have had since the 1970’s when inmates fought and died for them. In provincial jails we are subject to arbitrary authority with no effective grievance process. Provincial prisons are significantly more overcrowded than federal penitentiaries. Close to 70% of inmates in Ontario provincial institutions have not actually been convicted, and are instead awaiting bail or trial or in many cases are awaiting deportation. With the loss of conditional sentences and instead new harsher measures (especially for youth) and mandatory minimums, there will be an even greater reliance on the prison system. We are concerned and angry that the federal laws are going to do nothing but aggravate an already unacceptable situation.

Rehabilitation programs have been decimated and jails have become little more than warehouses. For example, this year we will see a massive cut to the Drug Treatment Program by $42 million dollars and under Bill C-10 this money will now be directly transferred to investigations and prosecutions. Bill C-10 will cost Ontario an estimated $1billion dollars on new prison infrastructure, while social programs and jobs are gutted, further driving people in to poverty.  The Ontario government says that the average cost to keep someone in a provincial prison is $183/day in comparison to social housing which is $5-25/day – yet jails are being built in the place of housing.

If you want to genuinely make communities safer, the solution cannot be locking away more people for longer in jails where we only become more angry and disillusioned. We need to change the conditions under which people are locked away and we need strategies to make sure fewer people from our communities are locked up at all.  We need to focus on rehabilitation and not warehouses. We need to focus on the root causes of why people end up here in the first place so that when people get out there is something better to go back to. We need to uphold human dignity, not deprive people of it. We can do this by safeguarding people’s human rights, not by stripping them of all responsibility and opportunity. We need to foster community and interpersonal ties that are based on something deeper than the ‘us against them’ mentality that this system instills in us.

By moving towards a system that protects the rights of all people including prisoners we can move towards real justice for all.

(*) More signatures are being added.