Organize to Win: A Pan-Canadian Coalition to defeat Harper and Neoliberalism

Organize to Win: A Pan-Canadian Coalition to defeat Harper and Neoliberalism 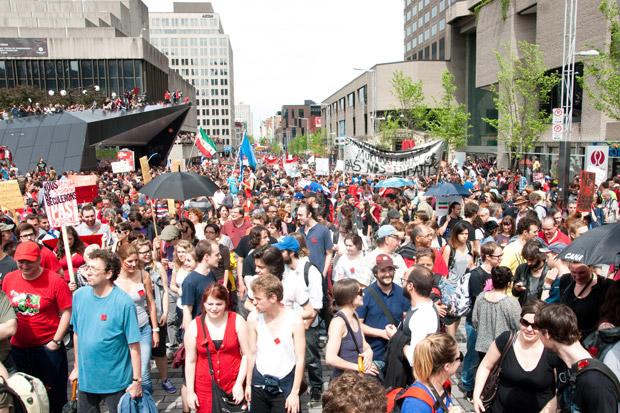 This November, 80 activists and representatives from across Canada, Quebec, and Indigenous nations, met in Port Elgin, Ontario to discuss and strategize how progressive forces can organize more effectively against the right-wing corporate agenda. One of the three working groups that emerged on the last day of this meeting was formed around the idea of building a triangular coalition of Indigenous, Quebec, and Canadian social movements that would be able to undertake collective action on strategically chosen issues. That working group charged a drafting committee composed of a number of its members with formulating a proposal for such a coalition process, which would be distributed widely to activists and progressive organizations across the country. This is that proposal.

The proposal outlines the idea of a pan-Canadian coalition of local and regional popular assemblies through which communities, organizations and activists can organize together to defeat the right wing agenda led by Stephen Harper. It would also seek to energize mass movements that can challenge austerity policies and neoliberalism and create alternative sources of power adequate to address the ecological, political, economic and social crisis we face. We believe the unique strength of this potential coalition is the promise it already shows of an unprecedented alliance between Indigenous, QuÃ©becois, and Canadian activists and social movements. The proposed organizational infrastructure would not exclude other strategies or actions, electoral or extra-parliamentary, and could be complementary.

â—      In QuÃ©bec, the “Red Hand Coalition” was successful in bringing together labour, student unions, community groups and women’s organizations, and was a key element in building wider solidarity with the student strike. This kind of broad-based coalition can serve as a model for the development of regional coalitions in other parts of Canada that would be autonomous and able to organize their own actions, using a democratic and horizontal model of organization.

â—      Regional coalitions based on assemblies, including provincial assemblies alongside Indigenous assemblies, would link up in a pan-Canadian Coordinating Assembly. The regional coalitions would build representative structures inclusive to racialized, immigrant, and other communities. The pan-Canadian Coordinating Assembly would identify common campaign issues and projects and map out strategies of action. The coordinating assembly should be multi-national, with QuÃ©bec, Canada and Indigenous Peoples represented as distinct but equal components. Relations between them would be guided by protocols in the spirit of the original wampums, agreements of coexistence, respect, and distinctness between Indigenous and non-Indigenous nations.

â—      We aim to create new forms of solidarity, while recognizing the different interests and inequalities that have emerged from histories of colonialism, patriarchy and oppression. We believe new forms of solidarity are essential to change the long-term political dynamics in Canada. Our proposal does not preclude other regional or provincial autonomies, or preclude Indigenous participants from participating in other regional assemblies and bodies. But it recognizes as central to this political project the creation of an alliance built around an Indigenous, Quebec, and Canada triangle.

â—      This form of organizing could handle several overarching issues. However, we believe a key organizing opportunity exists around the need for an alternative, just energy economy, which can be a gateway issue to garner broad interest and support, and simultaneously fight for economic and climate justice. Winning such an agenda would transition our society away from dependence on fossil fuels, combat the austerity agenda by creating more democratic, equitable and re-localized economies, and recognize and respect Aboriginal Rights, Aboriginal Title and Treaties. Corporate capture of the political process in the pursuit of reckless resource development has also eroded democracy, of deep concern to many across Canada. Of course, this proposed focus would have to be discussed and decided upon by the Coordinating assembly.

â—      This could open the door to organizing community, kitchen and neighborhood assemblies to encourage mobilization at the local level, or mobilizing strategies like a people’s energy coalition on the model of the successful People’s Food Commission of the 1980s.

We propose the following principles to guide the initial discussion and decision-making process.

â—      Must include effective and significant representation of social movements of Indigenous Peoples, QuÃ©bec and Canada, including racialized, immigrant and other communities.

â—      In particular, we should aim to identify common themes and campaigns that will shift the balance of power and open new opportunities for transformative change. The idea of uniting to fight to win one battle at a time requires a great deal of trust, but is ultimately the best strategy to score decisive victories, such as the one in QuÃ©bec in 2012.

â—      The process must be flexible and responsive enough to allow for local and regional variation in terms of focus, tactics, etc.

â—      The coalition is committed to collective action as the vehicle through which political work (including relationship-building) is done, and which will serve as the focus for education and organizing.

In order to go forward with this project, we want to bring together as many interested groups as possible to develop a plan. We have laid out some broad principles and strategies to build a national coordinating assembly, which can be successful only if we make decisions collectively and collaboratively.

We invite you to join us in Ottawa on January 26 and 27 at the founding meeting of the Port Elgin Coalition, which will happen concurrently with the coordinating meeting for the Indigenous Peoples’-QuÃ©bec-Canada Social Forum. (For details on time and location, visit here.)

The Social Forum initiative shares similar objectives, and involves many of the same people. It has already begun the process of organizing locally. On Sunday we will make decisions on the structure and nature of the pan-Canadian coalition proposal, and chart a path forward to build regional caucuses, incorporate or coordinate with existing coalitions and initiatives and discuss the first projects of the coalition. A focus will be placed on organizing effective actions that can advance our common goals.

This meeting and proposed coalition can be the beginning of a new and unprecedented level of communication, coordination and action between the diverse social movements across Canada. We hope you will join us.

On behalf of the Port Elgin Coalition drafting committee

Individuals and organizations wishing to add their names to the signatories should email portelgincoalition@gmail.com.