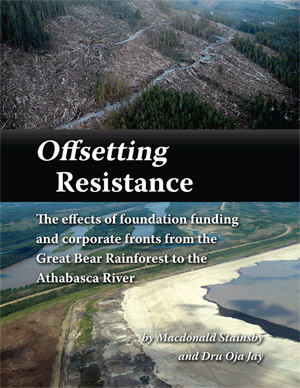 A movement is building to shut down the tar sands, one of the most
destructive projects in human history. Decisions are being made about
the strategies that will be used and the goals that will be pursued.

But as the number of people opposing the tar sands grows larger, the
number of people making the crucial decisions is getting smaller --
and closer to the oil and gas industry.

A small, secretive group of insiders has been collaborating with large
American foundations and industry to concentrate decision-making power
concerning anti-tar sands campaigns. Headed by Michael Marx, one of
the architects of the Great Bear Rainforest deal in northwestern
British Columbia, these groups have a track record and a documented
trail of funding relationships that steer them--whether they intend to
or not--into closed-door, backroom deals with industry and government.

The lack of transparency, the absence of any democratic structures,
the questionable sources of funding, and the track record of these
corporate and foundation-funded Environmental NGOs are the subjects of
a new report by Macdonald Stainsby and Dru Oja Jay. Offsetting
Resistance: The effects of foundation funding from the Great Bear
Rainforest to the Athabasca River examines the role of ForestEthics
and other Environmental NGOs in the Great Bear Rainforest deal and in
the Northwest Territories Protected Areas Strategy. From there, it
reveals the hidden structures behind the emerging "North American Tar
Sands Coalition," which seeks to keeps its decision-making body
"invisible to the outside," while funnelling millions of dollars to
its preferred groups -- to the potential detriment and sidelining of
community organizers across North America.

"After researching the history of these foundation-driven
organizations," says report co-author Macdonald Stainsby, "the thing
that stands out is the repeated use of temporary structures where
transparency and democratic input is non-existent. Worse, funding may
be used to force a specific agenda on the communities who are at
immediate risk from tar sands extraction."

"The other thing we found," adds Stainsby, "is that the communities
who win battles with industry tend to do so despite the work of these
groups."

"We're at an important point," says report co-author Dru Oja Jay,
"where we have to decide what kind of anti-tar sands movement we're
going to build."

"We can choose to become beholden to secret puppet-masters, funded by
massive American foundations and industry, or we can choose a process
that's accountable to the communities who are fighting for their
lives, a process that's democratic and transparent."

"Everything depends on which way it goes," Jay adds. "We're trying to
provide relevant information so that people can make informed
decisions. Will money be used to silence more critical voices, or will
grassroots initiatives be placed at the forefront of the struggle?"