The Dominion Summer 2016 Special Issue on Land Defence "Warrior Up!" is now online

The Dominion Summer 2016 Special Issue on Land Defence "Warrior Up!" is now online 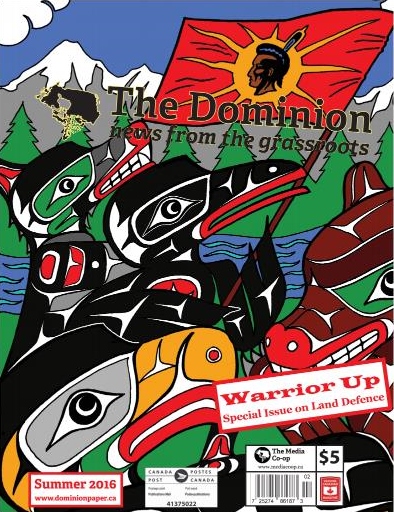 You can now read all the articles from the most recent issue of The Dominion online. You can also find our special issue on austerity here.

If you would like to order issues of the magazine, or have questions or comments, contact info@mediacoop.ca.

Articles in the Summer 2016 Special Issue:

In Dedication to the Late Wolverine, by The Dominion Editorial Collective

Unity is a powerful tool against the oppressor, by Suzanne Patles

Dancing in the Rain: Land Defence is Ceremony, by Danielle Boissoneau

Facing Down the Ring of Fire, interview with Neecha Dupuis

No Consent, No Pipelines: Resistance at Unist'ot'en, interview with Freda Huson

The Petronas Project and the LNG Pipe Dream, by Ashley Zarbatany

A Voice for the Voiceless, interview with Christine Jack

Impact of Biosolids on First Nations Way of Life, by Kay Swakum

Land defenders press on despite BC Supreme Court Loss, by Jerome Turner

The Voice from Sutikalh, interview with Hubie Jim