Their homeland occupied for 70 years, the people of Balochistan still cry out for justice

Their homeland occupied for 70 years, the people of Balochistan still cry out for justice 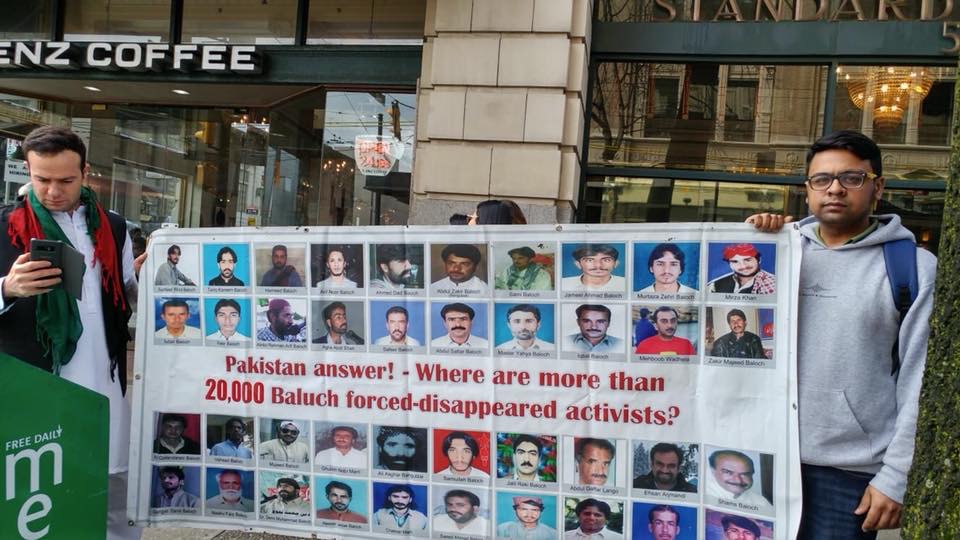 Baloch activists held a rally in front of the Pakistani Consulate in Vancouver, Canada Tuesday, on March 27, 2018, marking the 70th anniversary of the occupation and annexation of Balochistan by Pakistan. In the intervening decades, the Baloch have suffered gross human rights violations at the hands of the occupying state, and witnessed the looting of their territory’s abundant natural resources while the indigenous Baloch population remains mired in poverty. Pakistan’s armed forces have since perpetrated a long list of foul deeds, including a genocide that claimed the lives of millions of Bengalis in 1971, and the sheltering of the world’s most wanted man, Osama Bin Laden, next to a Pakistani army compound in the city of Abbottabad.

For the last sixteen years, Pakistan’s army has been prosecuting its fifth major military campaign in Balochistan, in yet another attempt to quell the Baloch national liberation movement. Throughout these campaigns, Pakistan has committed serious human rights violations, including thousands of illegal abductions, enforced disappearances, extrajudicial killings, and widespread internal displacement of the indigenous population. In part because Islamabad restricts access to the region by journalists, aid groups, and third-party investigators, the international community has largely been kept in the dark.

Among the thousands of Baloch who have been forcefully abducted are students, social and political workers, teachers, professors, doctors, and ordinary civilians. Many have later turned up dead, likely victims of extrajudicial killing by the Pakistani military and intelligence agencies.

Baloch activists call upon Canada, the United States, and the United Nations to lend their moral and diplomatic support, and demand an end to ongoing human rights abuses in Balochistan, and Pakistan’s denial of self-determination to the people of the region.

Now China, likewise an oppressive regime that continues to deny freedom and the right of self-determination to the people of Tibet, has joined Pakistan in the exploitation of Balochistan. As part of its One Belt One Road initiative, China has invested close to $50 billion in the China-Pakistan Economic Corridor (CPEC) arrangement, including a massive refurbishment and militarization of the Gwadar port on Balochistan’s coast. The two countries have deployed a heavy security presence and a network of checkpoints to safeguard this investment, denying the Baloch people freedom of movement in their own homeland.

Baloch activists appeal to Canadian human rights defenders, people of conscience, and the international community to speak up on behalf of the Baloch people, and condemn the atrocities of the Pakistani state and its proxies.