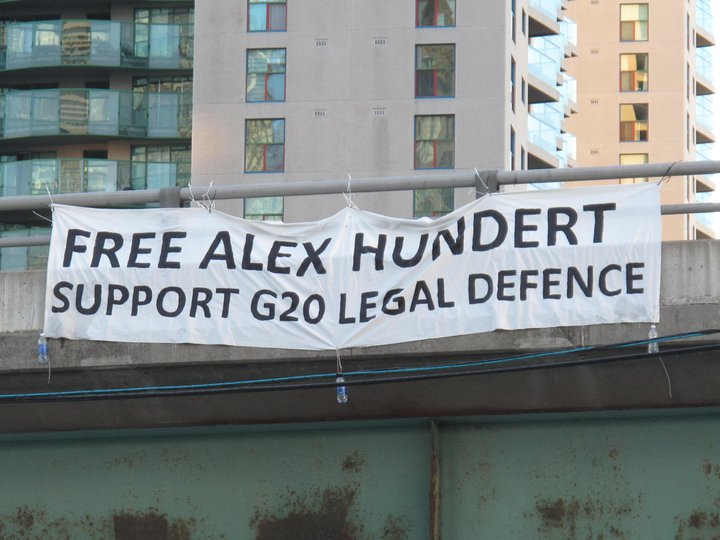 Toronto – At 8:00am this morning, activists from Environmental Justice Toronto risked arrest by hanging a banner off the Lakeshore Ave Expressway that said “Freedom for Alex Hundert,” a community organizer who has been in jail since being re-arrested after speaking at a public panel alongside University professors in mid-September.

“Alex Hundert is a strong voice for indigenous sovereignty and environmental justice. His work with AWOL in Kitchener-Waterloo is inspiration for all who are working to build a better world,” says Environmental Justice Toronto activist Brett Rhyno. “All charges against Alex should be dropped. The continued targeting of community organizers after the G20 is nothing more than an attempt to weaken our growing and thriving movement for social and environmental justice.”

The banner was in response to a national call to action from the Community Solidarity Network which was created after the G20 mobilizations in Toronto this past June. The call was for public demonstrations to take place on Tuesday October 12, when Hundert will re-appear in court after a judge ruled he violated his conditions to not attend any public demonstrations by speaking on a public panel.

October 12 is also the date of a global call for actions in support of Climate Justice, led by the Global Minga and Climate Justice Action networks. October 12, 1492 marks the landing of Christopher Columbus on what is now known as the Americas, marking the beginning of centuries of colonialism. This began centuries of domination of the Earth’s resources and indigenous peoples in the pursuit for growth and profit.

“Only powerful climate justice movements can achieve the structural changes that are necessary to confront the climate crisis,” says Rhyno. “All around the world today, climate justice activists are working collectively towards ending our addiction to fossil fuels, replacing industrial agriculture with local systems of food sovereignty, halting systems based on endless growth and consumption, and addressing the historical responsibility of the global elites’ massive ecological debt to the global exploited.” Environmental Justice Toronto is a grassroots group working to strengthen the environmental justice community in Toronto. EJ Toronto focuses on providing educational opportunities related to global mining, tar sands, Indigenous solidarity, climate policy, political lobbying, and direct action. It highlights these issues and raises the voices of those most impacted and at the forefront of these struggles.