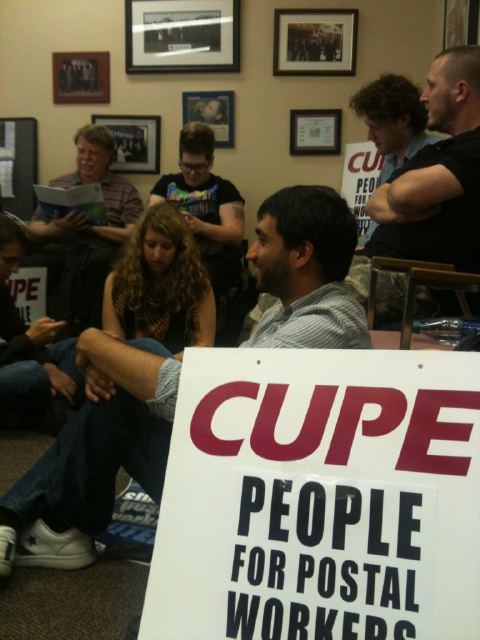 update: the occupation continues as of 12:30pm with 13 or 14 people in the office and postal workers and allies in the halls and outside the building. there's been poetry, singing, dancing and more inside the office, and CUPW workers managed to secure/negotiate the occupiers access to the washrooms[**correction: got them access to a washroom key, but if they leave office to use the washroom, police will block them**], but police stopped them from bringing in #solidaritysandwiches. Baird's office number is 613-990-7720

Ottawa – At 9:30am today, supporters of locked out Postal Workers began an occupation of Conservative MP John Baird’s constituency office, located at 2249 Carling Avenue, Suite 418. The occupation aims to draw attention towards back-to-work legislation currently being debated in the House of Commons.

The individuals occupying the office are not members of the Canadian Union of Postal Workers. They are all residents of Ottawa who wanted to speak up in support of the 48 000 locked out CUPW members.

“The contract Harper wants to force on CUPW will short-change postal workers even more than Canada Post would have,” says James Meades. “By passing back-to-work legislation, the Harper government is attacking every worker in the country, both private and public, union and non-union. Harper is wants us all to feel we never have the right to demand better working conditions, fair wages, or job security. We won’t let Harper silence us.”

The community members occupying Minister Baird’s office are also concerned about the wider implications of cutbacks desired by the Harper government, particularly the two tier wage system central to both the current CUPW dispute and the recent Canadian Auto Workers strike at Air Canada.

“There isn’t a two tier system for grocery bills or rent,” says James Meades. “This is just one more sign that Harper wants to help the already wealthy at the expense of poor and working people.”

In the last few days there have been occupations of Conservative MP offices by Postal Workers in Vancouver, Edmonton, Winnipeg, Montreal and Fredericton.