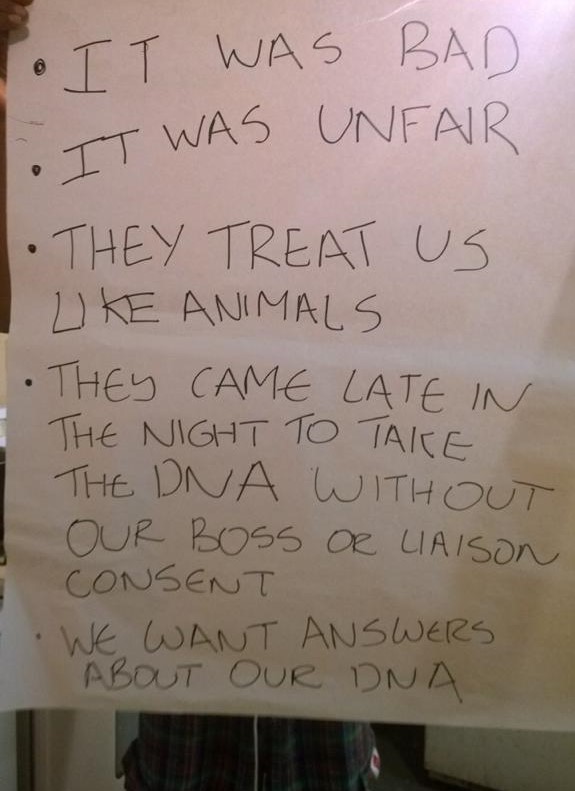 A group of migrant farm workers are going after the Ontario Provincial Police (OPP) in a landmark hearing, alleging the latter racially profiled them during a criminal investigation in 2013, thereby violating section one of the Human Rights Code.

The hearing, which began on Monday, November 22, at the Ontario Human Rights Tribunal is about the alleged racial profiling of 96 migrant farm workers from Trinidad and Jamaica in Bayham, ON, during a police investigation of a sexual assault in nearby Elgin.

Now, 54 of those workers are taking on the OPP, basing their allegations on the fact the cops took their DNA samples even though their descriptions differed from the police composite sketch they had, which was instrumental in eventually catching the perpetrator, Henry Cooper.

During the course of the hearing, the Tribunal heard of the "differential treatment" that cops gave to white farm managers, their lawyer told the Media Co-op. This included showing the sketch to the white farm managers but not to the migrant workers.

"Which is completely illogical," Shane Martinez said in a phone interview on Friday, Nov. 26.

"You can imagine that, had they taken the composite sketch to the bunkhouse where this (suspect) was living and said, 'Has anyone here recognized him?' somebody may have said, in all likelihood, 'Yes.'"

At the time, in 2013, police were searching for a sexual assault suspect who the victim had described as "about six feet," muscular, with a low, raspy voice, wearing a gray hoodie, workstyle pants and brandishing a silver knife. She'd also said she thought he was a farm worker because he was Black. That description led to the creation of the police composite sketch.

According to Martinez, this past Wednesday, Lead Investigator Brent Nolan testified that even though there were several farm workers coming in and out of that particular farm during the investigation, police relied on the white manager's "unverified" word to discard them as suspects.

While it's a good thing they weren't profiled, Martinez says, the issue is with the "differential treatment" given to the word of white managers versus farm workers of colour, which he says is driven by "implicit bias" within the police.

During the hearing, Martinez says, the Tribunal learned the OPP has not destroyed the DNA samples, as required by the Criminal Code, and that it rarely does. A separate class-action lawsuit against the OPP related to that issue is also underway.

At the Human Rights Tribunal hearing, Martinez says, police testified that during an investigation they never share information among themselves or with the public that may be considered unreliable or problematic.

But they chose to share among themselves the composite sketch drawn based on the information provided by the victim because "they found it to be that reliable," Martinez argues. They even shared it with the white farmer and the white workers on the farm.

Martinez says Nolan, the Lead Investigator during the 2013 investigation, even admitted on Wednesday that there was a striking resemblance between the composite sketch and Cooper, who was caught and convicted for the crime.

"When asked if the accuracy of the composite sketch matched the description the victim had provided to police and the person they had eventually arrested, Nolan said, 'Actually, she was pretty close. I can't deny that she was,'" Martinez said Nolan had testified through a statement provided to the office of the independent police review director.

On Monday, November 22, the Tribunal also heard that Detective Superintendent Karen Gonneau had not made any notes about her supposed suspicions that the witness' description of the suspect was unreliable. When questioned about it, she said she didn't make it a habit of jotting that stuff down.

But Martinez says he believes Gonneau's testimony is simply "excuses," noting that the witness' description led to the composite sketch and eventually to the arrest of the correct person.

"It's very uncommon for the police to say that, because the police use descriptions provided by victims every single day to arrest people and then convict them, and then they go into court and say this was the description that was given by the victim, so it should be trusted," he said.

"But when their behaviour is under scrutiny … then they want to say, 'Oh, no, this was unreliable. We could never conduct any part of the investigation using this description.""

While the results of the hearing are not criminally binding, they're expected to have long lasting implications on the Seasonal Agricultural Worker Program (SAWP), which has brought in thousands of migrant farm workers since 1966, when it began. It will also impact Canada's immigration system as a whole, given how crucial temporary foreign workers are to the economy.

Martinez says, if nothing else, this case will shine a light on "how vulnerable workers are under this program [SAWP]."

"I think this speaks to how workers who come here under the program are subjected to human rights abuses and violations of their rights that Canadians, by and large, are not subjected to," he says, adding that that's only possible because "the police rely on the invisibility of the workers."

"When it comes to police in these predominantly white communities…[and] in the event that the accused involves migrant workers, we see how the police behave, and we see how they utilize tactics which we have not seen them utilize in...a place like, let's say, Toronto."

Martinez says he can't speculate on the outcome of the hearing, but he is very confident that making the information public will intrigue people and push them to find out more about what Chris Ramsaroop, from Justice for Migrant Workers, calls the "plight" of migrant workers. Ramsaroop was an observer at the hearing.

"Martinez's questioning dismantled long standing beliefs that those in power have regarding the people who put food on our table. Migrants are rendered invisible, their contributions erased by farming communities that often view workers as property," Ramsaroop wrote in an email statement.

"This tribunal proceedings exposes racist policing but also connects it to the vulnerability that migrants endure as a result of being employed on an employer-specific work permit."

Whatever the outcome, Ramsaroop says, the case is shining a light on the intersections between systemic police abuse, implicit bias and the abuse migrant workers face under an "employer-driven program."

"Each action, campaign, legal case must be seen as part of the larger structure to end the power imbalance that migrants face under our current migration schemes," he wrote.

"It is imperative that changes occur where workers are accorded permanent status on arrival and simultaneously labour changes to end the power imbalance that exists across the food chain."