After a year of massive protests, the Indian government has repealed the controversial farm laws, and farmers' protest sites are closing down
by
Vandana K 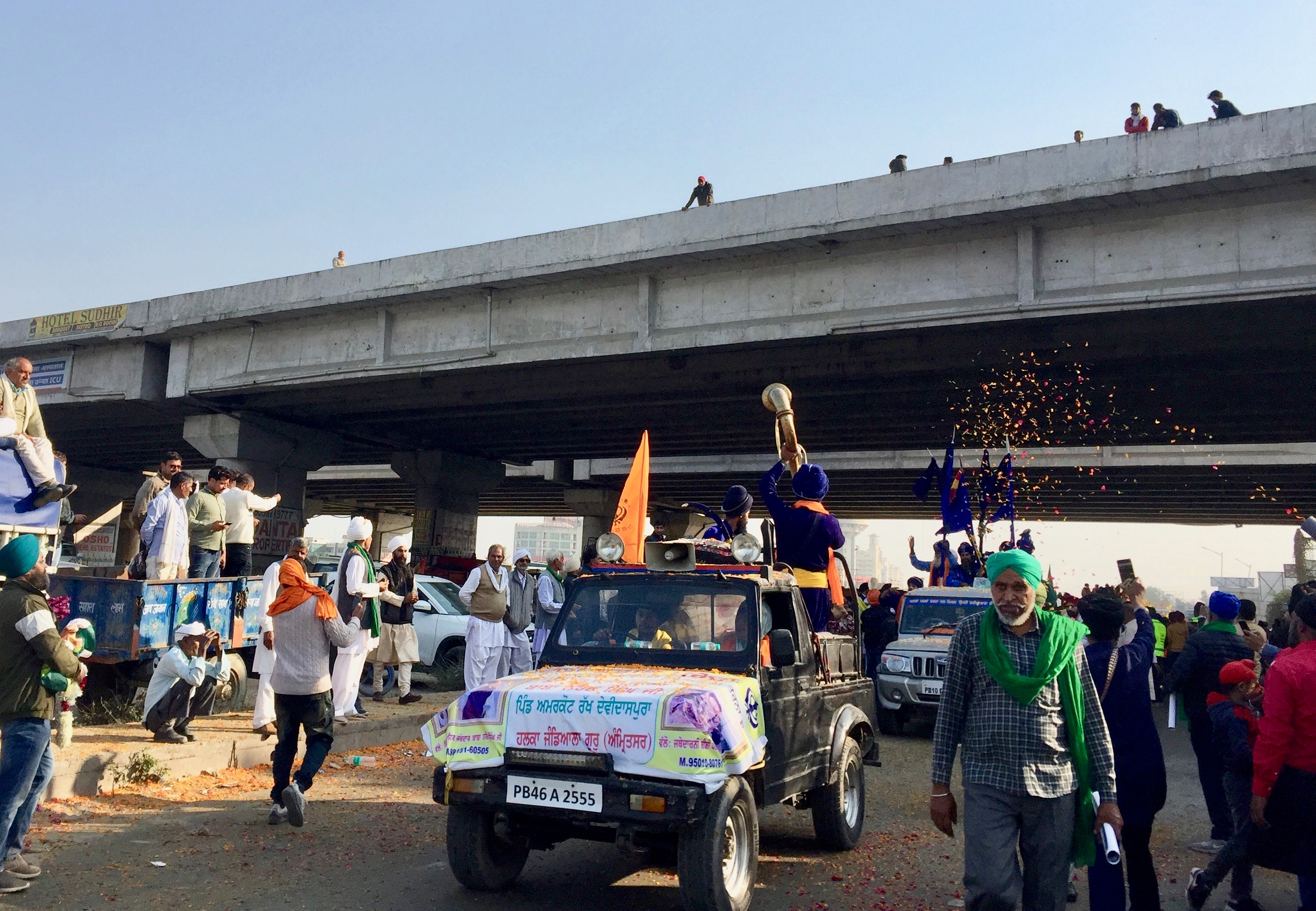 This past Saturday, December 11, 2021, was no ordinary winter morning at the borders of India’s capital Delhi. The infamous smog that hung over the city had diffused, the sun was out and Singhu, the first and the largest protest site of the farmers’ movement in India, was in flux. The farmers' protest in India, which lasted a little over a year, had reached its end. Behind the heavy concrete barricades and concertina barbed wire that separate Delhi from its neighbouring state of Haryana, only the last remnants of the protest that once occupied the national highway remained.

Bamboo screens, dark green shade nets, messy stacks of hay and steel frames that once sheltered farmers as tents, stages, kitchens, libraries and first aid stations were scattered around the centre of the highway. Local children played with sticks and stones where the farmers once slept through the vagaries of the weather and the pandemic. Two lanes running parallel to this vacant centre were flanked by cars, motorbikes, trucks, tractors, trolleys linked to water tankers and portable toilets, and horses. They were all moving at a snail’s pace in one direction: the way to Punjab. 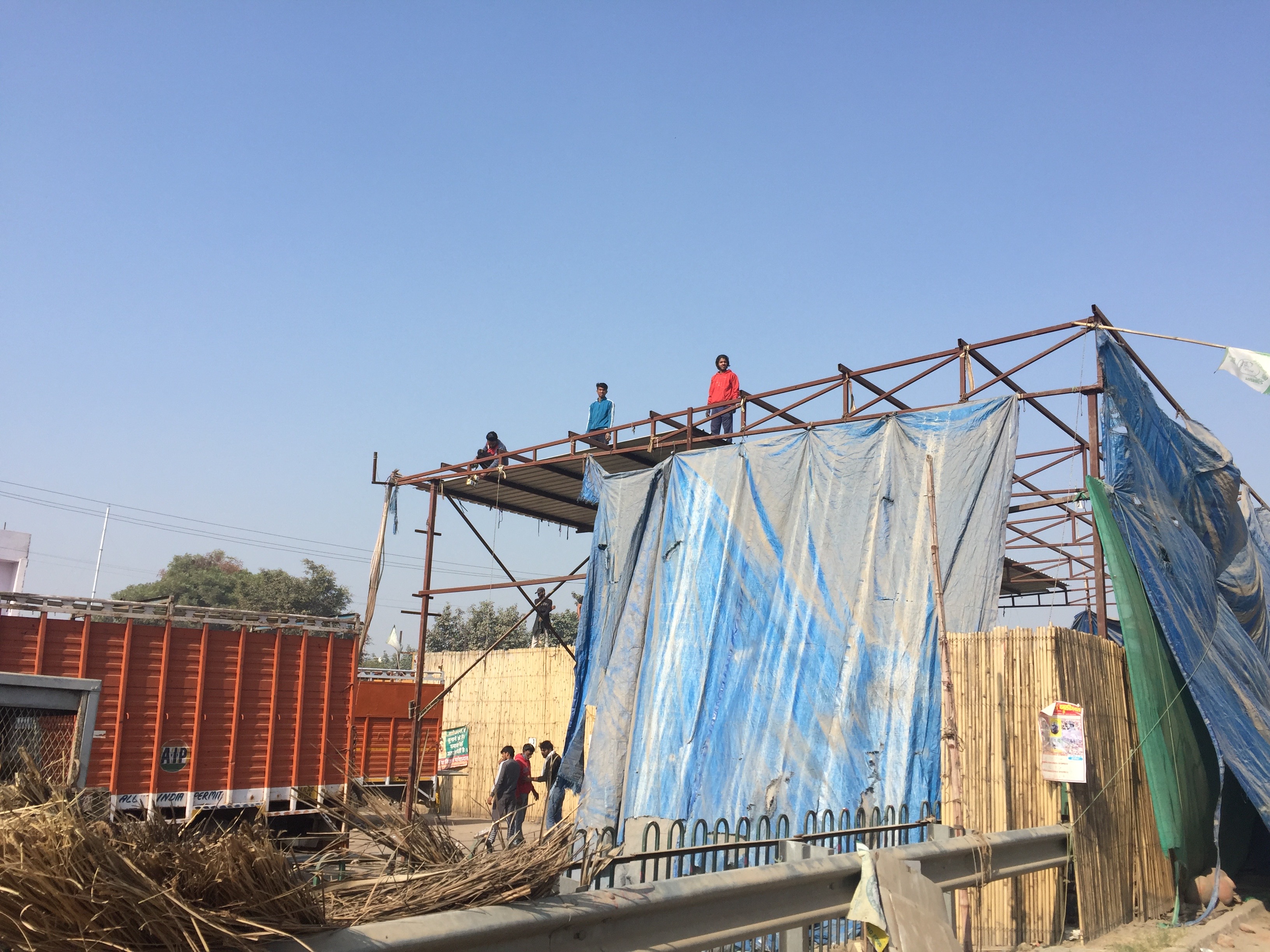 “Our protest lasted 378 days. We are very happy to win,” Satvant Singh told the Media Co-op on site. Singh is from Bhano Kheri village in Ambala. “There are things worth lakhs of rupees that we are leaving behind because we don't have enough vehicles to take them back. But we don’t care so much about stuff.”

Last month, Prime Minister Modi announced that the three controversial farm laws which were introduced in September 2020 would be repealed. The Farmers’ Produce Trade and Commerce (Promotion and Facilitation) Bill, Farmers (Empowerment and Protection) Agreement on Price Assurance and Farm Services Bill, and the Essential Commodities (Amendment) Bill had triggered country-wide protests by farmers who believed that these new measures disenfranchised them in favour of big corporations who aim to control India’s farm economy. This resulted in the longest farmers’ protest in the history of India which gained vast popularity across rural India and international support.

On December 9, a few days after the Indian Parliament repealed the laws, the Samyukta Kisan Morcha (SKM), a collective that represents the protesting farmers’ unions, released a statement saying the government had conceded to many of their demands in a formal letter and announced the suspension of the protests. And finally, on December 11, the protestors formally vacated the three sites they had been occupying since November 26, 2020 – Singhu, Tikri and Ghazipur – and headed home in a victory parade. 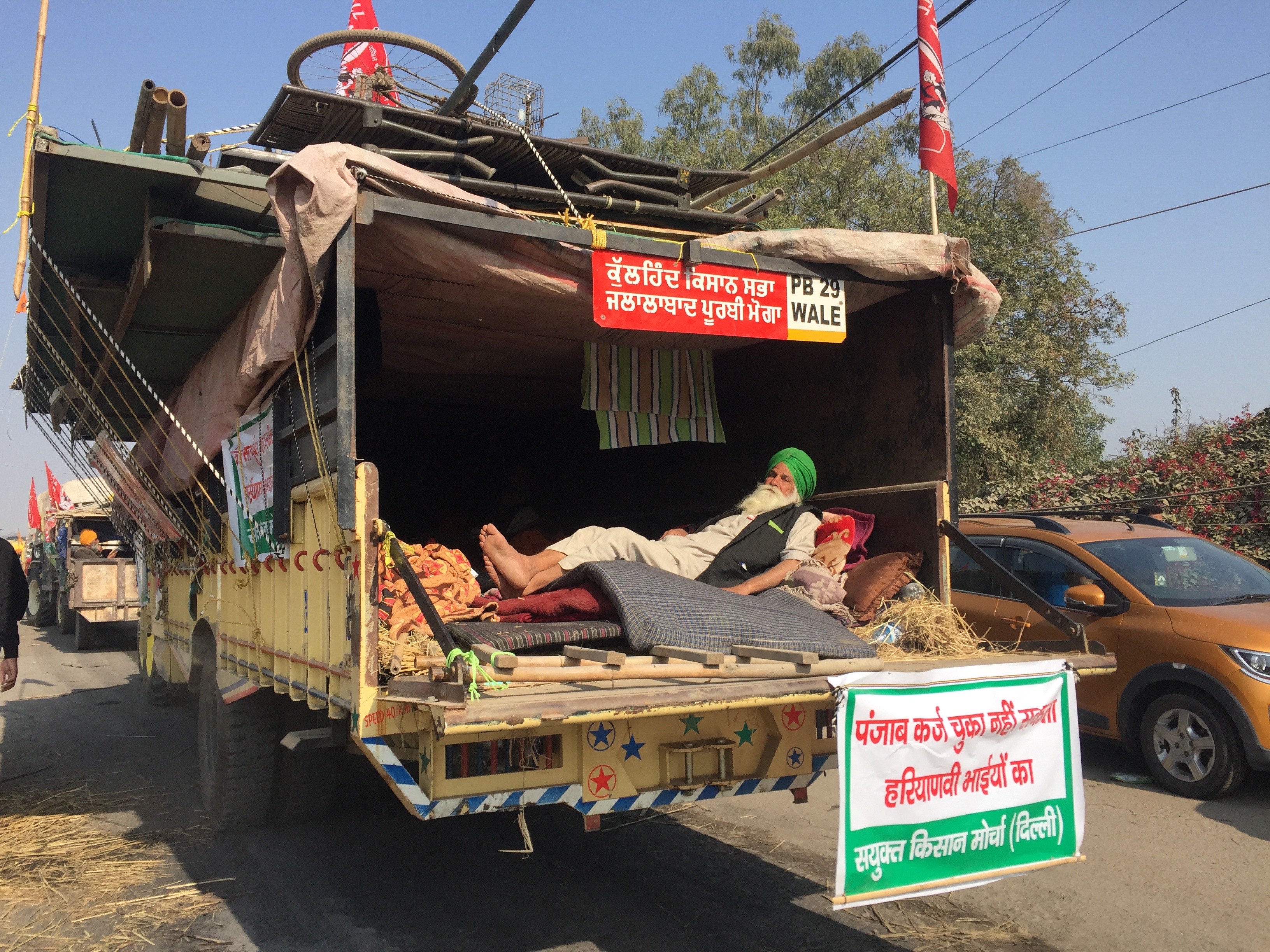 A farmer resting at the back of his truck as he heads home. Photo: Vandana K

The farewell scene at Singhu

Despite the heavy traffic, people’s faces bore a look of relaxation at Singhu. An elderly man leaned back on a pile of mattresses loaded on the back of a truck, read from a small booklet, and soaked up the sun. In another open vehicle, children sat on a huge stack of belongings, dangling their feet in the air. Nihangs, the warriors in the Sikh community, reined in their moody horses, their vibrant saddle blankets shining from miles away in the glaring afternoon sun. A black jeep moved sleepily, its rear window covered with stickers declaring “No farmers, no food” and “Proud to be a farmer.” A yellow flag hoisted out of another car read “No corporate, no cooperation.”

Harsimran Singh from Sangrur, whose father is a farmer, told the Media Co-op, “I came here on the day when the protest first began. We came here with the passion for victory and are leaving with the same feeling. We knew that Modi would relent.” 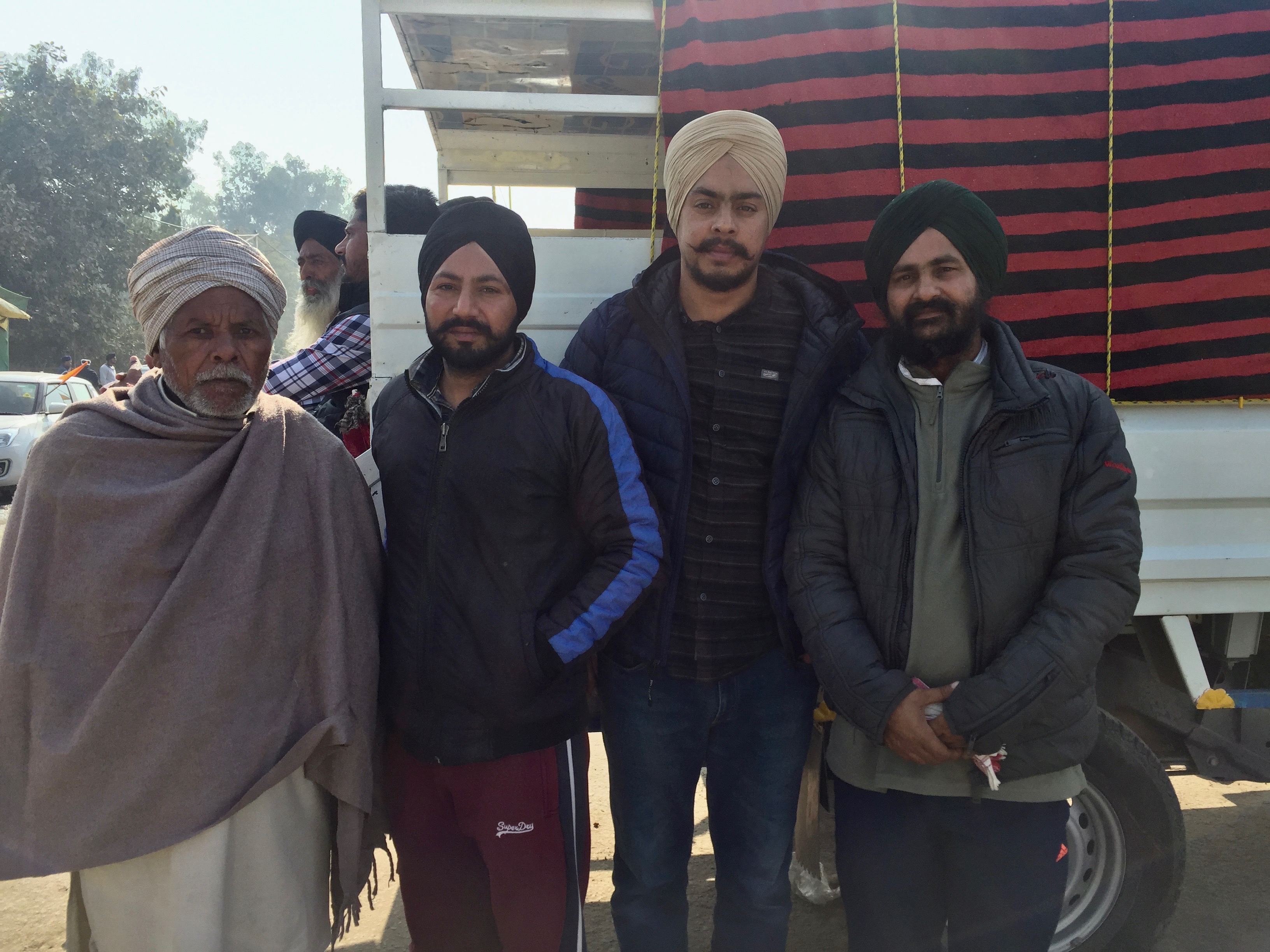 Satvant Singh (third from left) and Harsimran Singh (fourth from left) at Singhu before their departure. Photo: Vandana K

“The big stage was dismantled today morning. People were in tears…I feel sad to leave,” said Aishlin Kaur, whose family migrated from Punjab to Delhi two generations ago. She spent all of last year’s holidays at Singhu. The farmers' movement has been a learning experience for many youth including the ones from rural, Sikh and diasporic communities. It provided them a window into the current political climate of India and gave them a chance to educate themselves about issues faced by farmers.

When asked why the movement saw such tremendous participation and success, Roy Singh, who has ancestral farmland in Punjab said, “History hai saadi, seekh hai saadi (It’s our history, it’s what we have learnt). Our parents taught us that our gurus sacrificed their lives and the langar (communal kitchen) never stops. This is the lesson we will pass on to our children.”

The spirit of giving, of seva (selfless service), was a major highlight of the protests. It could be seen in the material and financial donations that poured in from around the country and the world as well as initiatives such as laundry, toilets, medical facilities and even massage chairs for the weary farmers at the protest sites.

On the last day, December 11, every vehicle was heading to the nondescript Kundli–Manesar–Palwal Expressway (KMP) – the place where the returning farmers were being welcomed cheerfully. The mood was jubilant. Punjabi music blasted from boom boxes fitted on tractors. Men, young and old, showed their best bhangra moves, giddy with joy. Their supporters stood on the pavement, fists full of flowers, showering the dancers, drivers and passengers with marigold and rose petals. The grey dusty road was suffused with a sweet fragrance. 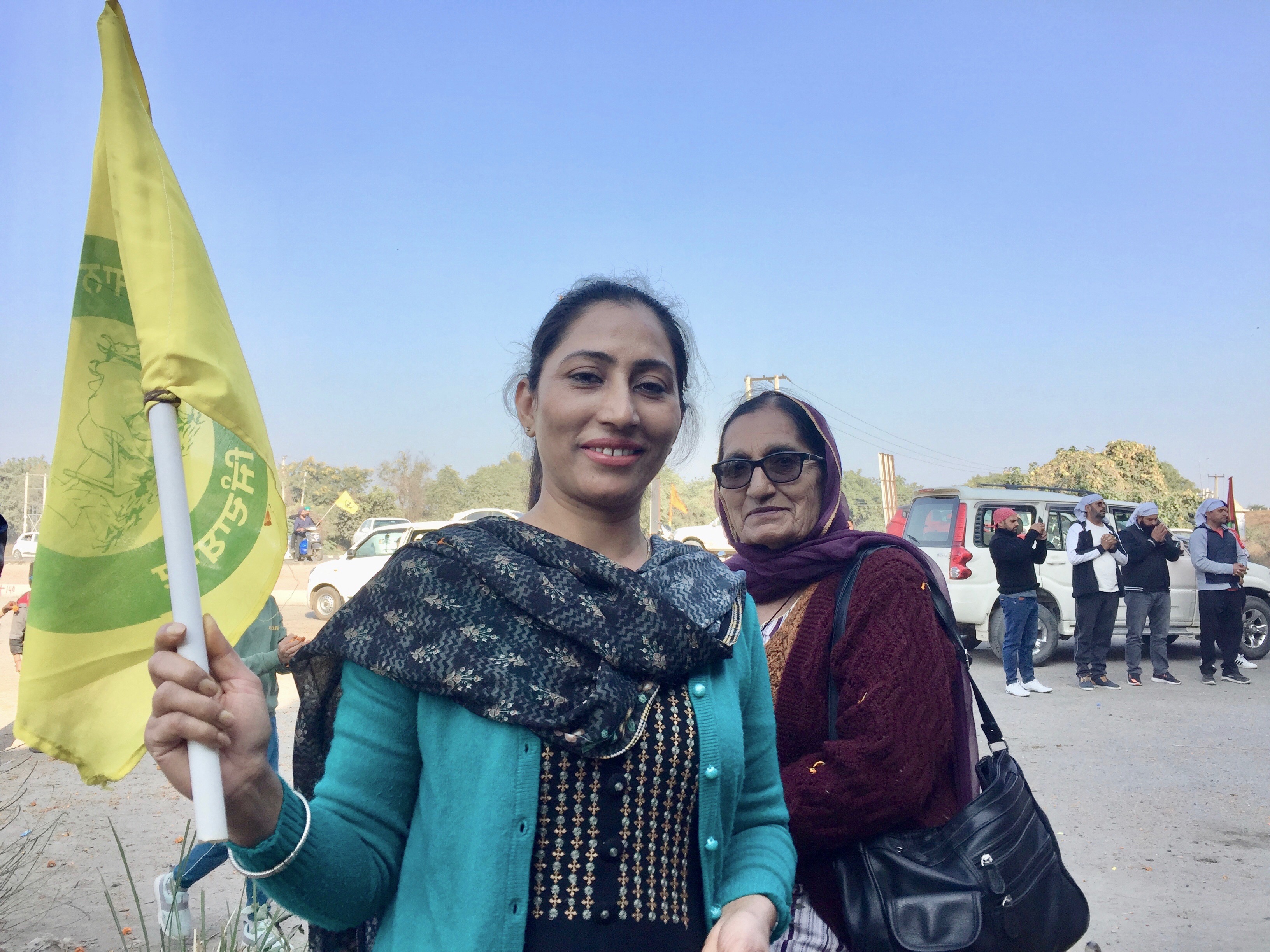 Navjeet Kaur and her mother-in-law at KMP. Photo: Vandana K

A lifetime of lessons, gains and persisting pains

Navjeet Kaur had especially taken the day off from work and spent the entire day seeing off farmers at KMP and Ghazipur. She had travelled from Ghaziabad (outside Delhi) with her family of five including her two young daughters to see off the farmers. Navjeet works in a hospital and comes from a farming background. Her brother-in-law cultivates wheat and rice in their family’s farm in Bareilly in Uttar Pradesh.

“This experience has taught us that no government is bigger than the people who elect it,” she said. She attended the protests during weekends with her children. “We wanted to show our kids that if you stand up for what you believe in, you will succeed. We also wanted to show them how well-disciplined and organised the farmers were.” 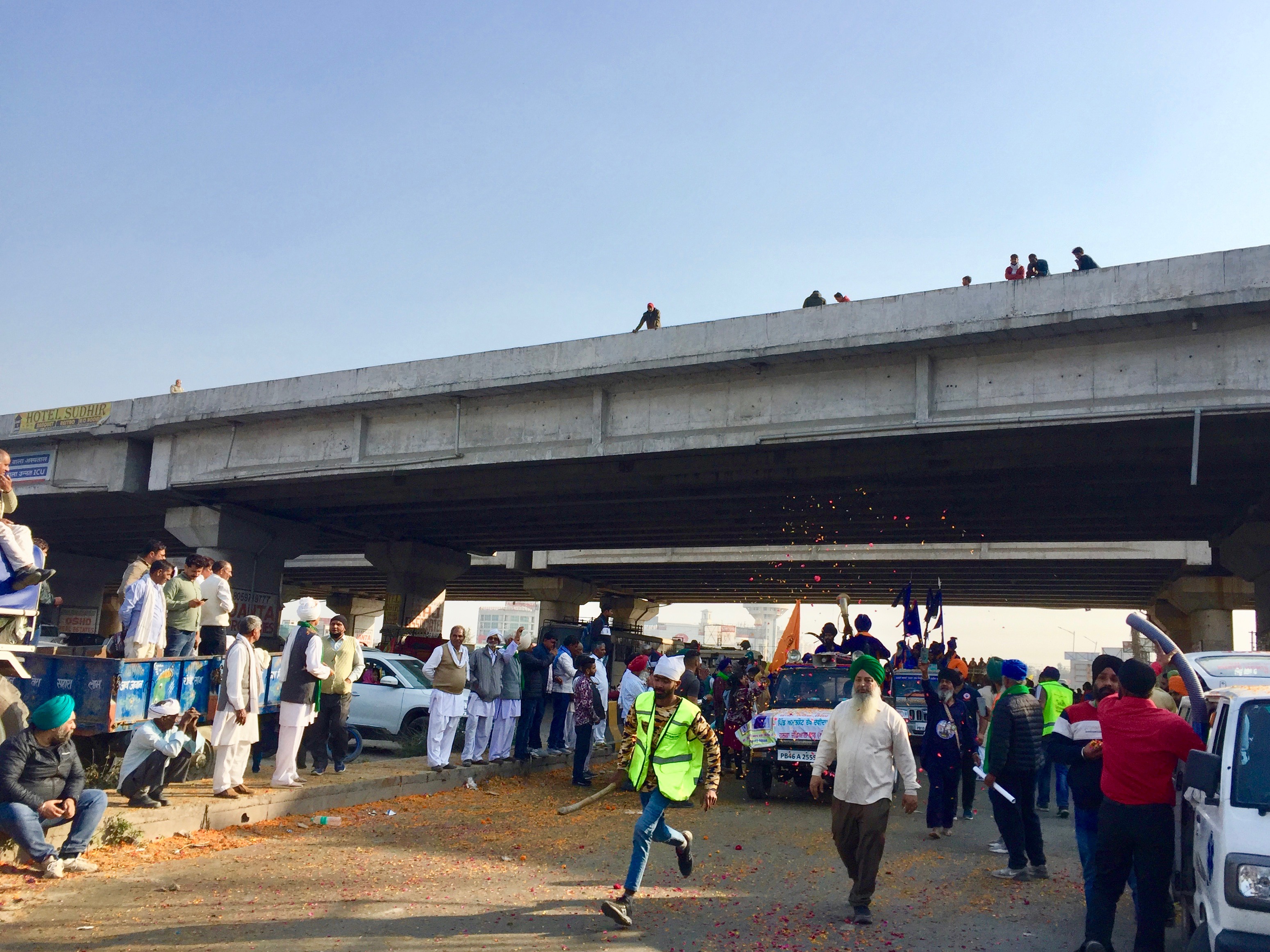 “We’re still on our way to victory after the three laws were cancelled but this battle is not over yet. MSP is still a struggle,” she said. One of the major demands of the movement is the legal guarantee of a Minimum Support Price (MSP) for certain crops. The government has promised to create a committee to look into it.

There are other unresolved problems for farmers, in addition to MSP. Sukhwinder Kaur, a small farmer of Aiman Jattan village said, “I still have to pay a debt of 400,000 rupees ($ 6,753) to the bank and there has been no help from the government.” Kaur came to Singhu thrice during the protests with women from her village. “Earlier we didn’t know much. Our elders helped us understand that these laws will be disadvantageous to both labourers and farmers and that we will lose our rights because of them.”

Kaur described that the day protestors returned to her village was an occasion as joyous as a wedding, replete with sweets, singing, dancing and a feast.

“This was not just any small conflict. It was a big deal,” she said. 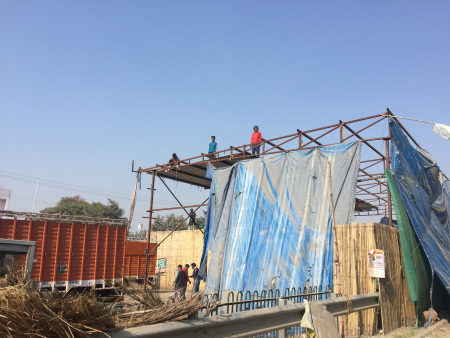 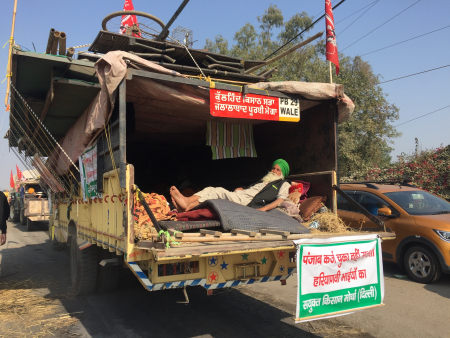 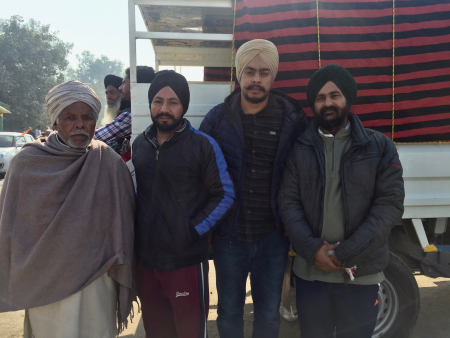 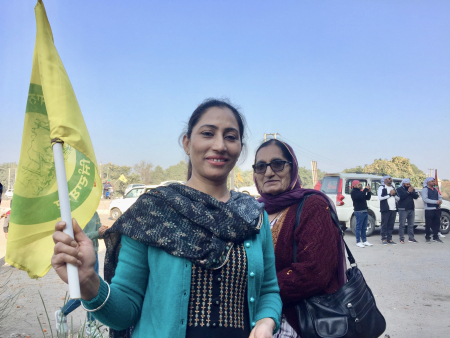 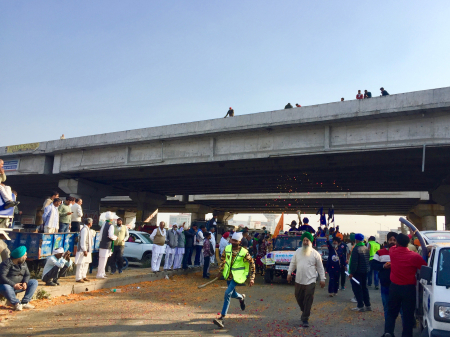