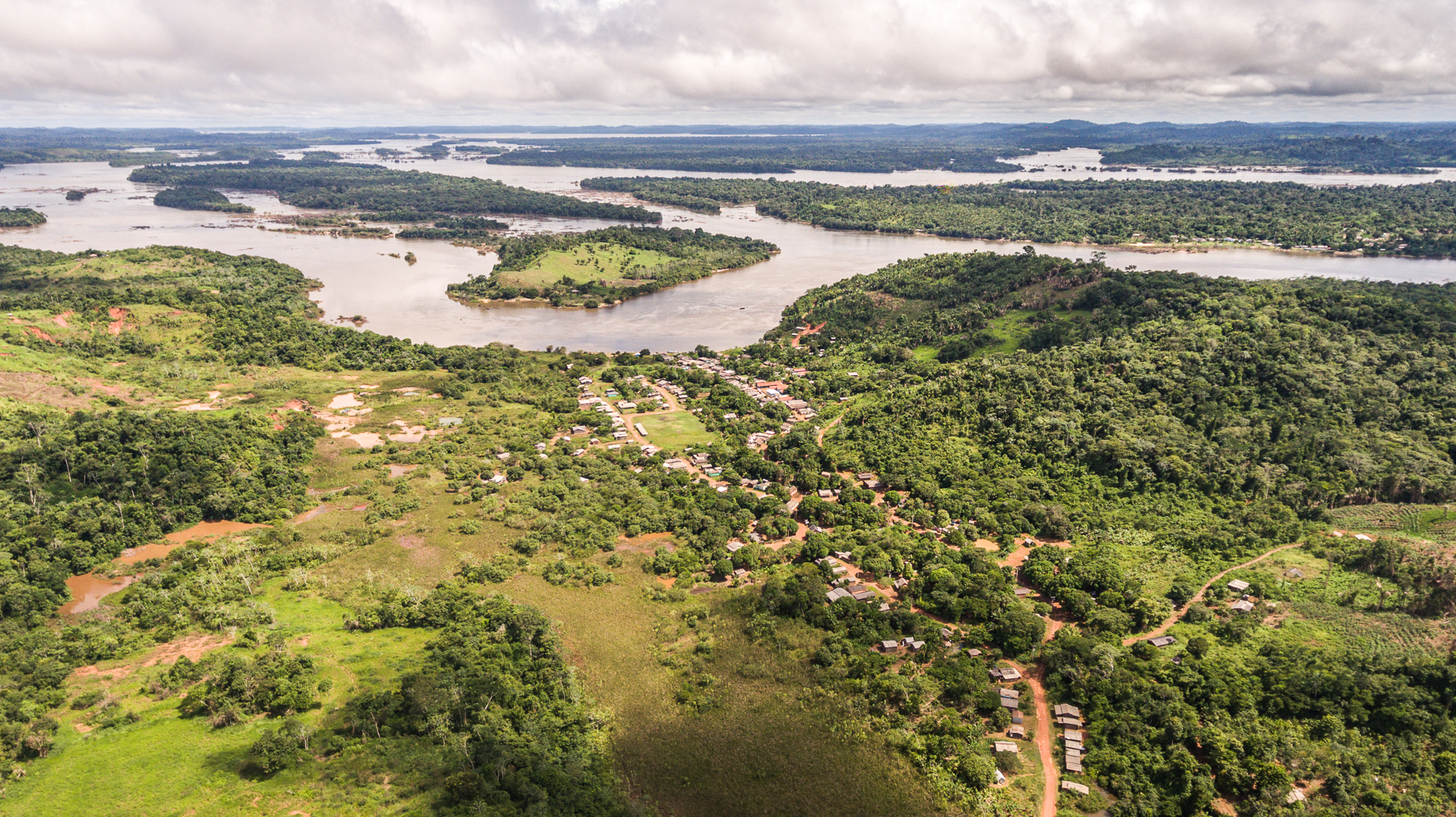 In February, the American NGO Amazon Watch and the grassroots Association of Indigenous Peoples of Brazil (APIB) released the report Complicity in Destruction IV: How Mining Companies and International Investors Drive Indigenous Rights Violations and Threaten the Future of the Amazon.

Local and international financiers, including BlackRock, Vanguard and Capital Group, injected USD $54.1 billion into eight mining companies, including Vale, Anglo American, and the Canadian Belo Sun, according to the report. This mapping of the interests of mining companies interacting with Indigenous lands is the fourth in a series initiated by both institutions in 2020, as we reported earlier.

“This new report presents evidence on how industrial mining destroys our forests, poisons our rivers and fishes, and brings chaos wherever it goes. Currently, this death project tries to advance over our territory and protected areas, so it can be said that it comes to our lives and of those in traditional communities,” says Indigenous Lawyer Luiz Eloy Terena with APIB, in an interview to the Media Co-op. 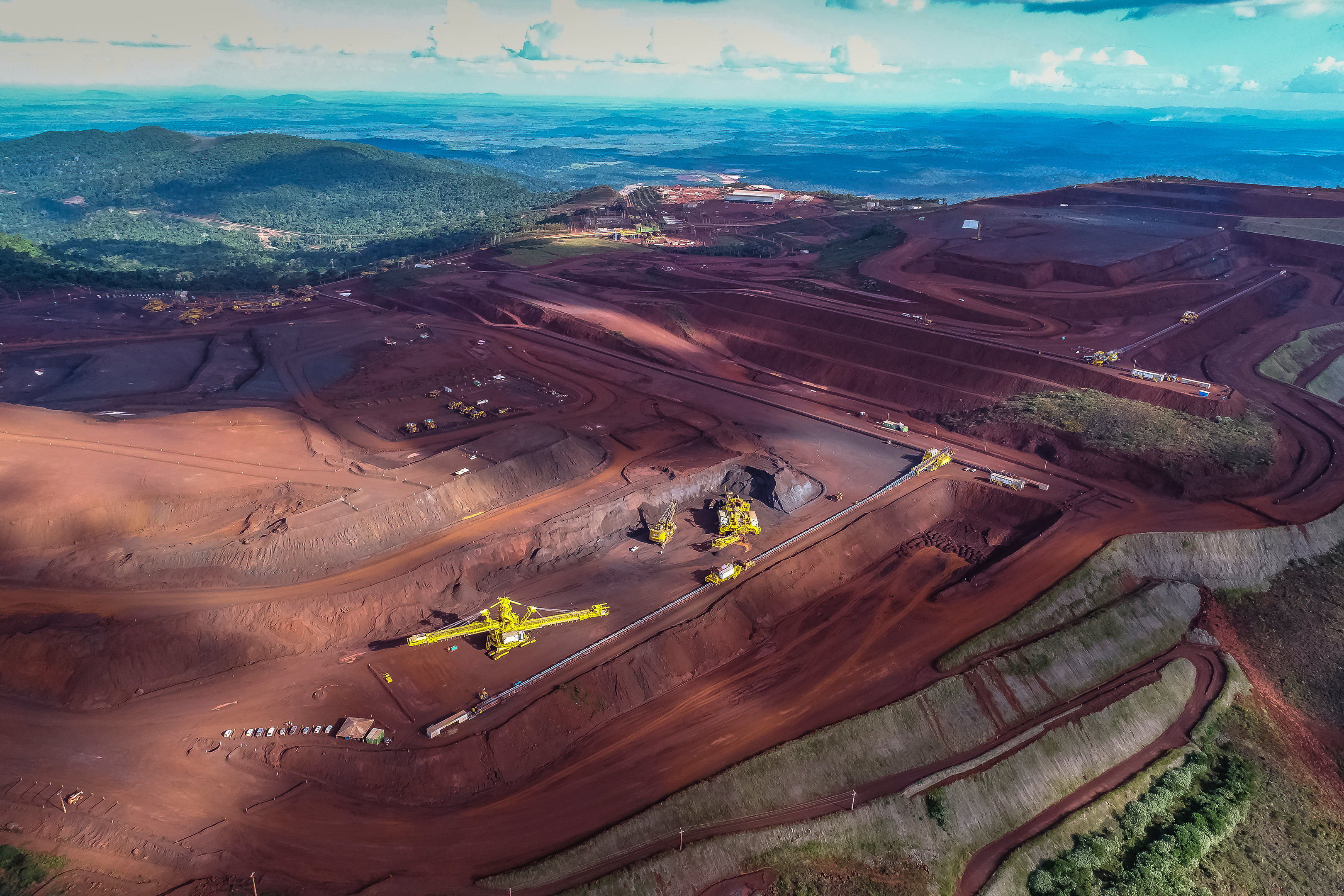 “It is unbearable to live with ongoing activities that make Indigenous people cry the daily murder of our relatives or to witness the rampage of ecosystems that we are the guardians,” says Eloy Terena, “when in reality we see a project that doesn’t bring real development but in fact only desolation and profits for few hands.”

This has been happening since the dawn of the tropical country, including through recent events condoned by the previous governments, such as the building of Belo Monte Dam during Dilma Rousseff’s tenure (2011-2016). This behavior intensified under current President Jair Bolsonaro, specialists, activists, and media groups attest.

“This study is important for Indigenous peoples to be part of the discussion on mining in their territories in order for their demands to be heard, which is not happening [currently], despite having this right under ILO Convention 169,” says Miranda. She is referring to the International and Tribal Peoples Convention agreed to in 1989, a forerunner of the United Nations Declaration on the Rights of Indigenous Peoples (UNDRIP). 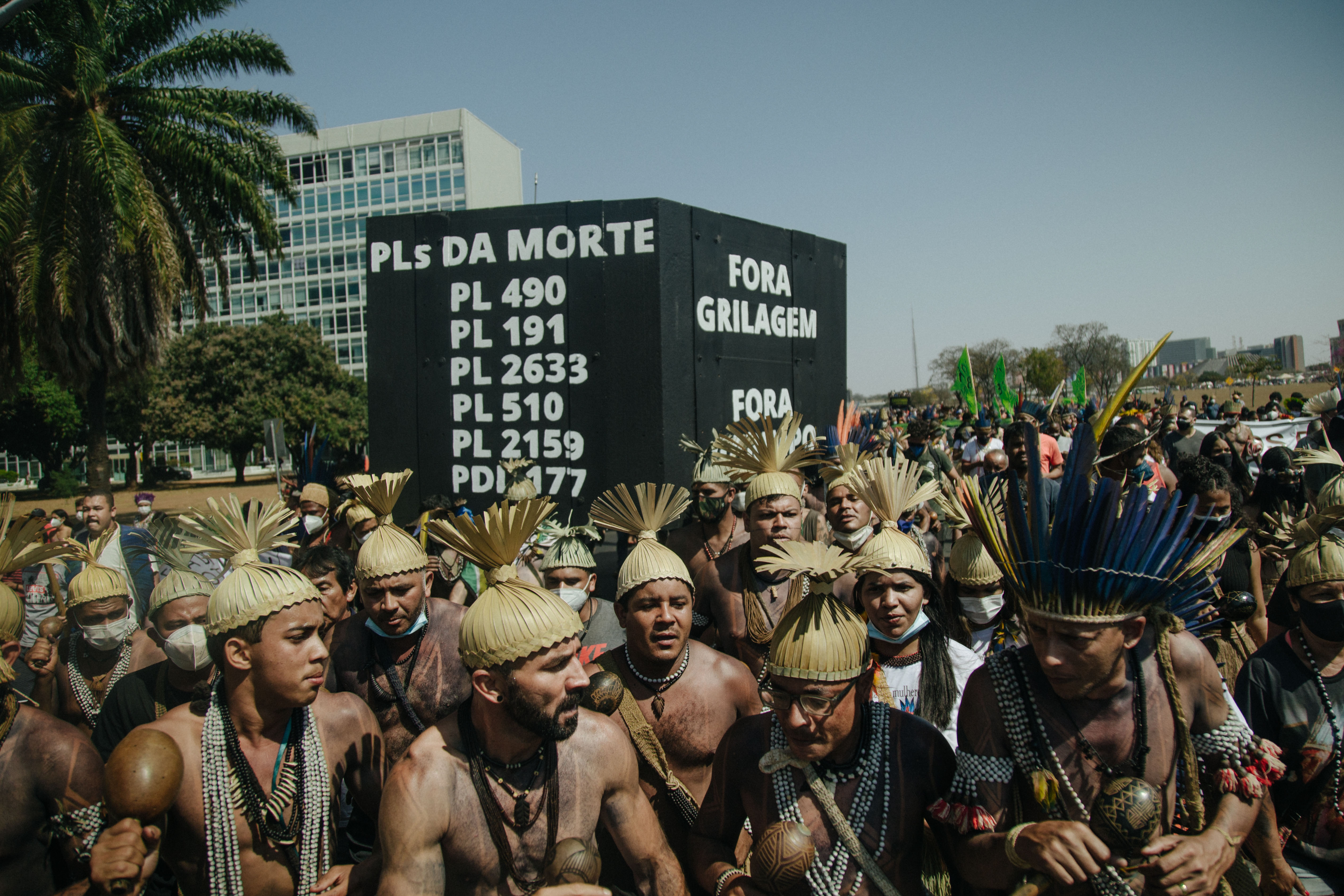 Funeral procession in Brasilia to "bury" the "projects of death" being legislated in Congress and encouraged by the Bolsonaro government, August 2021. Photo: Tuane Fernandes / Greenpeace

Miranda affirms that Indigenous peoples are against not just mining but another activities which run parallel to it: illegal gold digging (commonly called “garimpo”). If the previous report, Complicity in Destruction III, brought to light information on agribusiness and energy sectors moves against Indigenous and environmental interests, this new one focuses on mining. This is because the Association of Indigenous Peoples and Amazon Watch see Bolsonaro moving more towards this issue, as indicated by the bills mentioned earlier.

The activism against these endeavours has brought some victories, according to Miranda. After they started tracking mining companies’ intentions to prospect on Indigenous lands in 2020, the requests filed at the National Mining Agency (ANM) decreased from almost 4,000 to nearly 2,500 in the following season. “This has a lot to do with the increased scrutiny by a number of civil society organizations and the Indigenous movement,” states Miranda of Amazon Watch.

This is still only a pyrrhic victory, as the new report shows that in spite of public announcements by mining companies forsaking their interests in Indigenous lands, allegedly some of these players still have hundreds of illegal requests in these areas active in the database.

“The deforestation associated with mining in the Amazon region raised in 62% in 2021 when compared to 2018, the year Bolsonaro was elected Brazilian President,” contextualizes Eloy Terena. To him, the ascension of the far-right leader has brought havoc, including to the rainforest and its inhabitants.

Gold miner Belo Sun is among the companies mentioned in the report, and it supposedly has activities in the Xingu River basin. Questioned on the Canadian mining company’s current activities, Miranda says it has “no interest in slowing down, despite the many irregularities related to its licensing project, the many lawsuits it is facing, and the strong opposition by the local communities.”

Miranda recalls that Belo Sun was forced by a Court decision to proceed with a consultation process with two communities located near their operating site, but “it spent 2020 and 2021 trying to rush the consultation, despite recommendation from [public health] authorities to prevent in-person interactions with Indigenous groups” in order to reduce COVID-19 transmission. 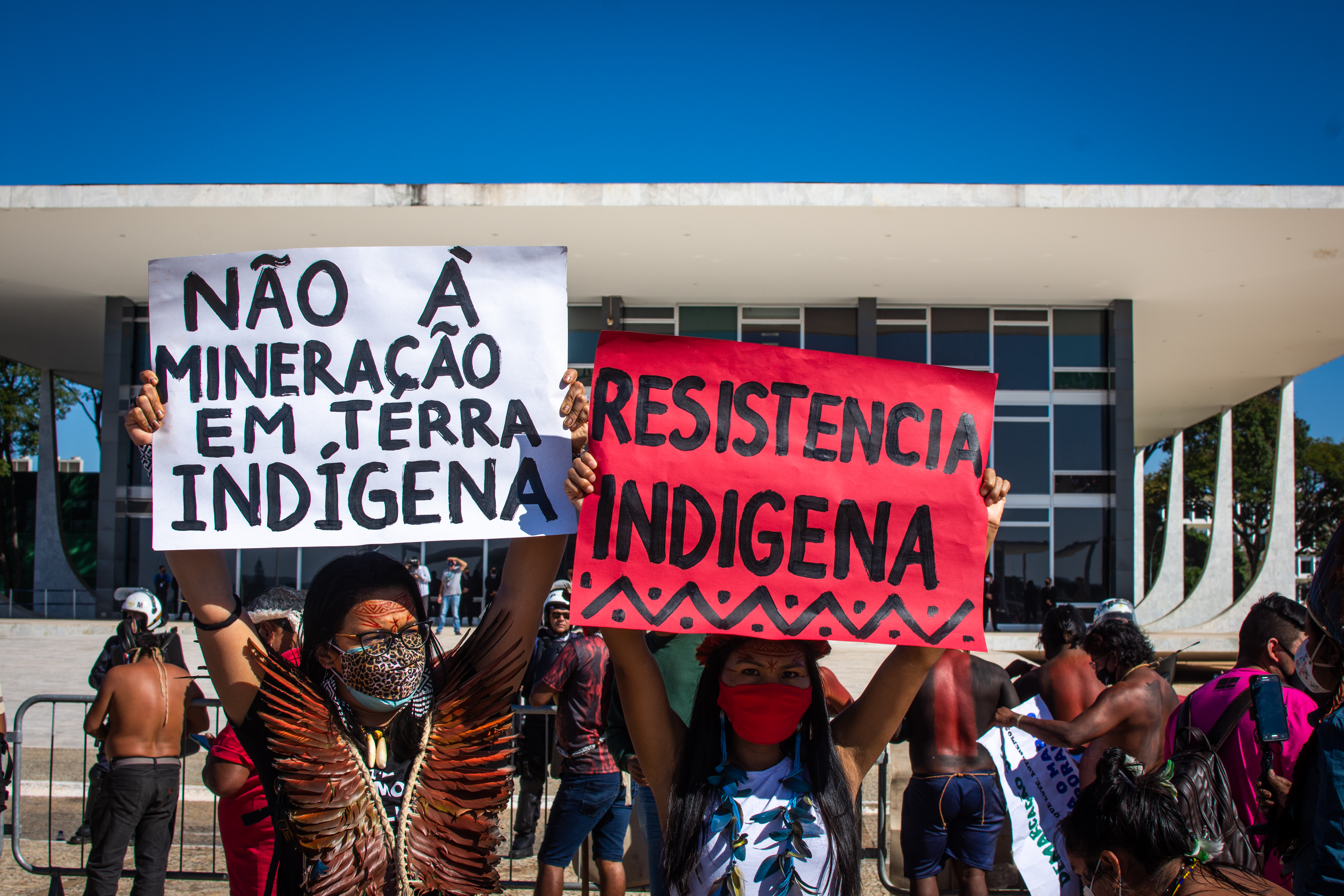 Eloy Terena is blunt about the consultation. “Belo Sun has not been respectful on the right for consultation by the Indigenous and traditional peoples (e.g., Ribeirinhos) in the Volta Grande do Xingu region, shunning out the peoples that they consider wouldn’t be affected by their activities but in fact they are.” The Vila da Ressaca community of the Volta Grande (or "Big Bend") region is pictured in the first image in this article.

In a statement to the Media Co-op, Belo Sun emphasizes the benefits of the project to the local communities and states that, “Contrary to recent news, Belo Sun claims that it does not have concessions or permits for mineral research in indigenous lands, and that it is developing the Volta Grande Project, which is not within an indigenous land, not even within a 10km radius.”

Indigenous lawyer Eloy Terena accuses Belo Sun of employing “irregular and illegal methods like intimidation” to move ahead with their project of gold extraction in the area while also “omitting essential data from its backers such as the fact that their environmental licenses have been suspended by [the Department of] Justice which tries to minimize the damages in the region already affected by the Belo Monte Dam.”

Miranda points out that Belo Sun has completed one step of its consultation process and “is trying to use that fact to overhaul a decision that suspended the installation license until consultations were finalized.” But the activist affirms the license is not going forward. Accusations from environmentalists against the Canadian mining company keep piling on.

“At the same time, Belo Sun spent the past three years secretly negotiating with INCRA [Brazil’s Federal Land Reform Agency] to offer a plot of land in the state of Mato Grosso as compensation for land reform areas it plans to use for its project. The entire negotiation is legally void, and has been challenged by Brazilian authorities such as the Public Defender and Prosecutor's Office. In this same region, Belo Sun is accused of illegally acquiring public lands. This negotiation continues behind closed doors without involving the affected community members, many of whom have lived in the area for more than three decades,” says Miranda.

The Alliance of the Volta Grande, an international coalition that Amazon Watch is part of, fired back by filing a complaint to Canadian authorities in the Ontario Security Commission but received a reply that the investigations were confidential. The Alliance says they doubt there is in fact an ongoing investigation. They also reached out to Canadian ministries and the Royal Bank of Canada but to no avail. They also lament the lack of coverage by Canadian media.

“Contrary to recent news, Belo Sun claims that it does not have concessions or permits for mineral research in indigenous lands, and that it is developing the Volta Grande Project, which is not within an indigenous land, not even within a 10km radius.

Belo Sun understands and respects that there will be divergent opinions about mining projects, but believes that it will bring many social and economic benefits, providing employment, security, education, training and improvement of the quality of life to the surrounding communities, indigenous and not indigenous people, municipality and region.

Volta Grande Project will be a responsible industrial mining project, in accordance with legislation and socio-environmental regulation, which will bring big economic, social and environmental benefits, making it a project worth of the support from the entire region.

The Belo Sun is honestly committed to the socio-environmental responsibility and sustainability of the region of Volta Grande do Xingu and its communities.” 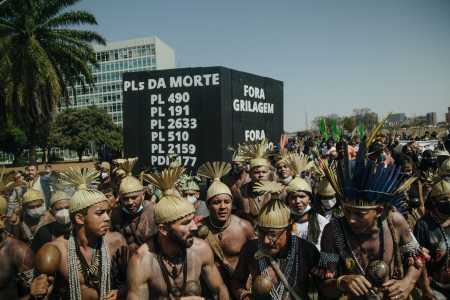 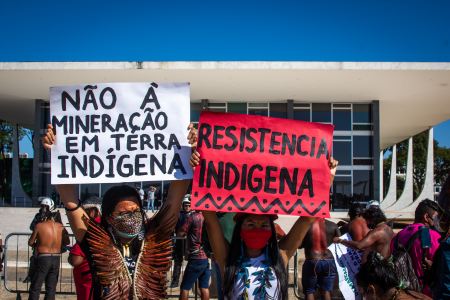 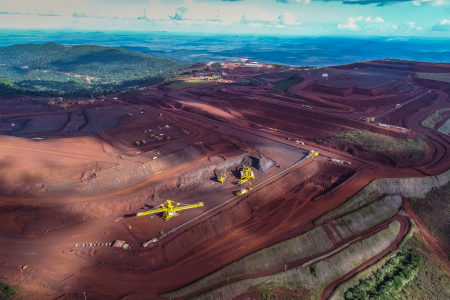