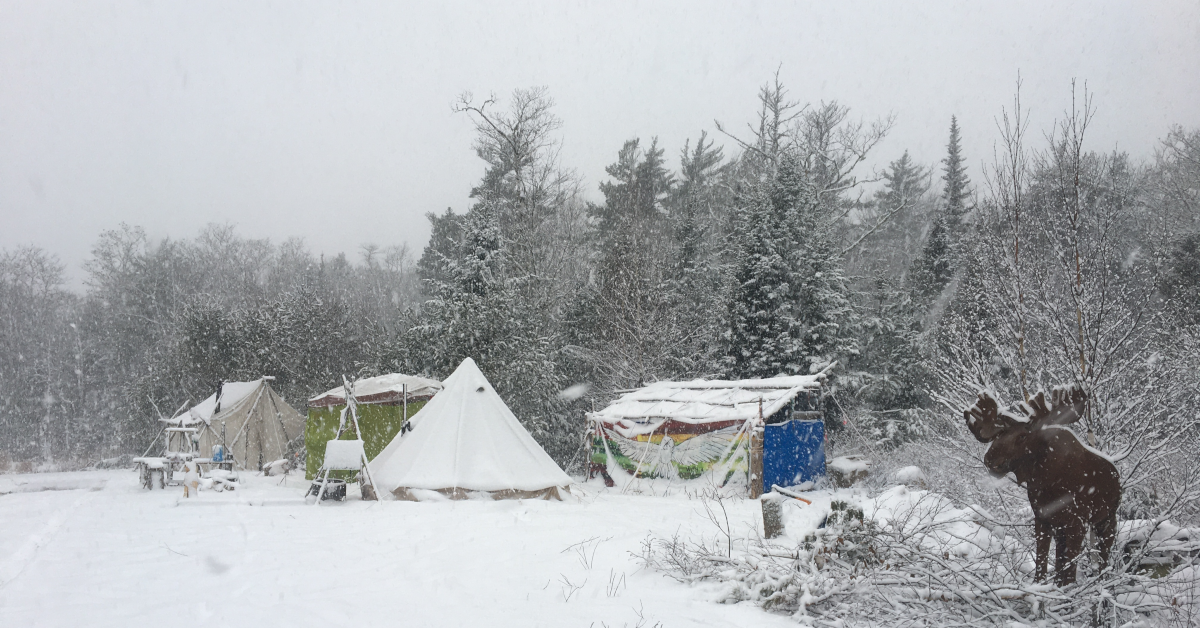 Nina Newington is a long-time activist and an organizer of the Last Hope Camp, whose participants have been living in tents on the land since December to block the logging of an ecologically important forest in southwest Nova Scotia. Scott Neigh interviews her about the practicalities of taking this kind of direct action, about the broader struggle to defend forests in Nova Scotia, and about the Last Hope Camp.

As a relatively small province, and one of the first historically to be hit by the devastating impacts of settler colonialism, the amount of forested land in Nova Scotia is fairly modest compared to most other provinces, and almost none of it is old growth. However, though employment in the sector has been steadily declining for many years, there is still enough that the province has an active forestry industry. Most of the forest in Nova Scotia is designated “Wabanaki-Acadian,” which indicates a sort of mix between evergreen boreal forest and more southerly deciduous forest.

Given the devastating impact it has had on ecosystems in Nova Scotia, the rules governing how the industry operates have been hotly contested for a long time. There have been two major reform efforts in the last decade and a half that have attempted to introduce more ecologically sound approaches, but resistance by industry to proposed changes has been fierce and largely successful. The most recent effort took the form of a government review in 2018 that produced a set of proposals that many environmentalists regarded as far from perfect but nonetheless a step forward, but late last year the author of the review issued what CBC described as a “scathing update” on the “lack of progress” in implementing it. And in their victory in last year’s provincial election over the incumbent Liberals, the Conservatives promised to protect 20% of the province’s land, to the Liberals’ 17%, yet little progress has been made on implementing that either. Today’s guest describes the overarching tendency across governments in recent decades as “talk-and-log” – making promises of consultation and future change, while continuing to actively facilitate the same old ecological harms.

Nina Newington came out as a lesbian in 1970s England, which, she said, “was not a very friendly place to come out. So I had a kind of outsider’s view. And that left me with a fairly skeptical take on the structures of power.” She lived for many years as an undocumented immigrant in the US, where she was involved in environmental action related to a nearby nuclear reactor. In the early 2000s, she and her wife moved to Canada, initially to Edmonton, but for many years now living on a farm in southwest Nova Scotia. This has given her plenty of opportunity to witness the “devastating effect that industrial forestry was having.” She said that Nova Scotia has “been at the mercy of pulp and paper mills for a hundred years. But particularly in the last 30, the clear cutting has gone crazy.” This has become a primary focus for her grassroots political work. At some point, she discovered the Nova Scotia branch of climate action group Extinction Rebellion and co-founded a chapter in her area, which at this point has, in a loose sense, been the base of three major forest defence direct actions.

The most recent of those actions – the Last Hope Camp – started in early December 2021. Newington saw a comment in a Facebook group from a local farmer, hunter, and trapper who was frustrated that nearby Crown land, where he’d had a cabin for many years, was set to be logged within a couple of weeks. She connected with him, they talked it over, and they decided to set up a camp. The threatened forest is not old growth, but at about 80 years old, it is still older than the vast majority of forest in the province. It is ecologically important as it provides habitat for a number of species-at-risk and connects three large wetland areas. The name “Last Hope Camp” comes from a hunting camp that had existed in the same place in the early 20th century – in those years, game was already getting scarce, and hunters who didn’t have the meat they needed to last the winter would often go there and have a good chance of finding moose.

In the almost six months since the camp began, around 80 people have spent time there, including 50 who have camped, and many more have acted in support in urban areas. It was a rough winter in Nova Scotia, but prospector’s tents and other quality gear made it almost easy – “glamping with a possible criminal record,” Newington joked. In fact, her assessment is that the risk of arrest in this particular action is very low, given that it is on Crown land.

Of particular importance to the camp was a visit early on from the chief of the local district of the traditional Mi’kmaq governance system, who presented them with a flag of the seven Mi’kmaq districts. Newington said, “We’ve been told that this is our invitation to be on territory, and thanks to us for our efforts to protect the land and the creatures that live on it.”

So far, though it was supposed to begin late last year, there has been no sign of any attempts to start logging the area. At least part of the reason for that is that the group has successfully identified numerous instances of species-at-risk in the forest, particularly rare lichens, that the provincial government’s supposedly thorough assessment of the forest had somehow missed. This resulted in a temporary formal pause in the permission to log the area, as well as a certain amount of embarrassment for the provincial government, according to Newington. She said that before the discovery of these lichens, the Nova Scotia Department of Natural Resources and Renewables had “made quite a big deal out of the fact that their biologists had reviewed the site not once but twice in response to citizen concerns, and had found nothing that they needed to worry about. And as it turned out, their biologist just basically never left their desk. Because they mostly don’t.” The official pause in the logging permit has since lapsed, with new requirements that any logging leave a buffer around the rare lichen.

The camp is demanding that permission to log this particular piece of forest be rescinded permanently. They are also asking that a larger piece of territory that encompasses where the camp is, as well as some of the province’s minuscule remaining old growth, be protected. Newington believes that in their talk of protecting 20% of the land in Nova Scotia, the current government is following in the footsteps of previous governments and “playing us all for fools,” and that substantial grassroots pressure will be necessary to force them to keep that promise. She hopes a broader movement can push for an end to the “talk-and-log” orientation and for real governmental action to preserve the province’s forests.

Newington said, “What I hope would happen eventually is that people connect to places that they care about, near where they live, and decide that they’re really not willing to accept those areas being cut. And that they really do want them protected and they’ll do what they need to do to keep them whole until they’re protected.”

She emphasized that while direct action is important in protecting forests, it is only one part of the picture. She said, “My own feeling is that we all need to do what we can do. And some people, for lots of different reasons, can’t risk arrest. … So it’s important to value everything that people can contribute.” Maintaining an action like the Last Hope Camp requires all sorts of off-site logistical work, for instance, and turning such a camp into a political win involves lots of other kinds of organizing too. “It won’t work if the people who are camping are not connecting to a wider circle of people who might not be up for camping on a logging road, let alone getting arrested, but are up for signing petitions and writing letters and donating some money and calling politicians. And, you know, many of us might feel like we’ve tried letters and petitions and marches and it doesn’t do enough. But it doesn’t mean that those things shouldn’t happen. You need them to happen so the politicians can’t say, oh, it’s just a gaggle of ten loony tree huggers out in the woods and nobody else cares.”

Image: Used with permission of the Last Hope Camp.