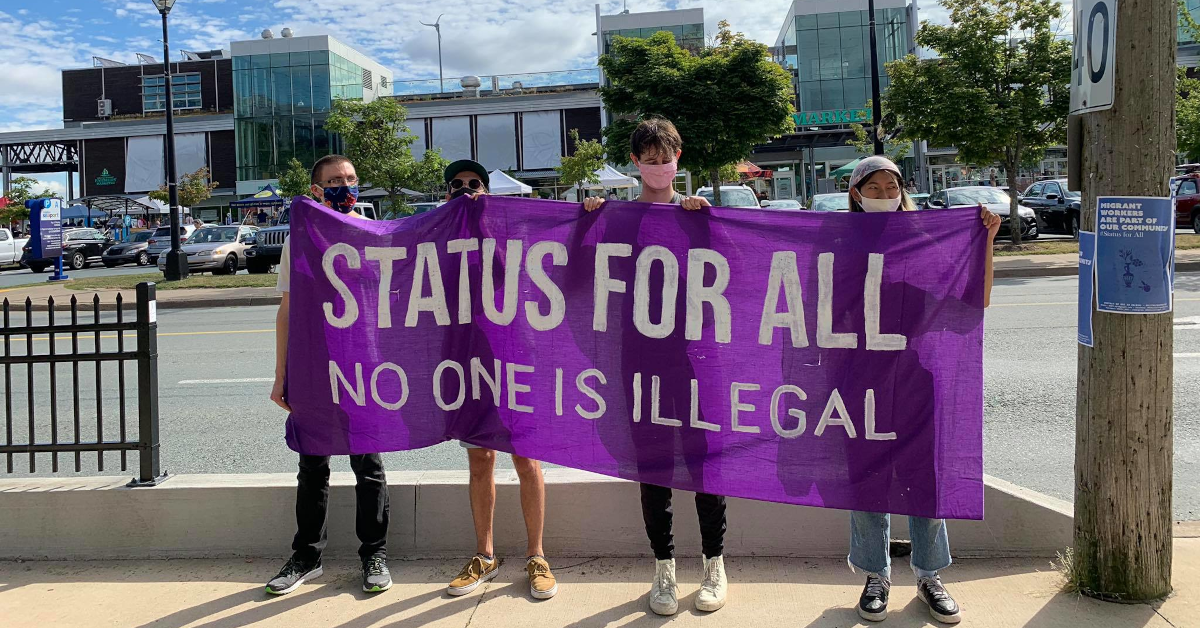 Stacey Gomez lives in Halifax (aka Kjipuktuk) in Nova Scotia, within Mi’kmaqi, and she is a migrant justice organizer with No One Is Illegal – Halifax/Kjipuktuk. Scott Neigh interviews her about the group’s origins and about its work as the first grassroots effort in Atlantic Canada focused on organizing with migrant agricultural workers.

No One Is Illegal first existed in Halifax many years ago. As happens sometimes with grassroots groups, it went dormant for awhile. And then a few years ago, Gomez and a friend decided to revive it, initially with a march calling for racial and migrant justice. After that, the group’s work focused for a period of time on the needs of undocumented people in the Halifax context. It involved lots of public education and advocacy, around specific issues like undocumented people’s exclusion from access to the public health care system. But in discussion among members of the group and people in the community, they decided to shift their focus. Gomez said, “We were thinking it’s important for us to do more engagement and outreach with migrant community, and for our work to actually have some kind of material benefit to migrant communities. So this is really where we decided that our focus would be in terms of solidarity with migrant worker communities,” mainly in the agricultural sector.

In other parts of Canada, particularly Ontario and British Columbia, there are multiple groups that organize with migrant farm workers, some of which have been doing so for decades. But in Nova Scotia, there had never before been an organization focused on this work. So as the members of No One Is Illegal began getting out to the many smaller communities where migrant farm workers live – they sussed out where workers go to shop and to socialize, and struck up conversations – they knew it would be a long, slow process.

Since 2021, they have spoken to thousands of migrant workers. In the beginning many, quite understandably, were cautious about a new group with no track record. Gomez said, “People, obviously, were nice. But there just wasn’t a lot of receptiveness.” But many were also pleased to see that such an initiative was getting started, and No One Is Illegal has been working hard and showing up consistently, to show migrant farm workers that they are in this work for the long haul. They have been gradually building trust and relationships with migrant workers across many different Nova Scotia communities.

Most migrant farm workers come to Canada under the Seasonal Agricultural Workers Program, which for more than five decades has been bringing people from countries of the Global South to work for part of each year on Canadian farms. (These days in Nova Scotia, according to Gomez, most migrant farm workers are from Jamaica and Mexico, with smaller numbers from St. Lucia and Guatemala.) Advocates have long argued that the design of the program itself, and the ways in which it enshrines the precarious character of migrant workers’ status in Canada, is the central factor in making workers vulnerable to heightened oppression and exploitation by employers.

Workers do not get to choose their employer, and they are bound through their work permit to a single employer – they cannot exercise the basic right of workers to seek employment elsewhere. There is a process for workers in extenuating circumstances to temporarily get a permit that allows them to work a different job, but it is cumbersome and relies on the discretion of federal officials. Workers that Gomez has talked to have faced things like wage theft and other pay irregularities, terrible conditions in employer-provided housing, physical violence, and blatant racism from employers and community members. They also are prevented from accessing public health care, and the private insurance that is a mandatory part of the program does not always cover what they need. In practice, No One Is Illegal and other groups observe that workers who speak up for their rights, who file labour standards complaints, or even who apply for workplace compensation after an injury can be at risk of retribution from employers. Sometimes, for example, they might be sent back early to their home country and not called back by the same employer the next year, and perhaps not allowed back into the program at all.

Gomez said, “Because of these closed work permits, this puts workers in a situation of vulnerability. Also, because they have temporary immigration status. This is the primary reason why migrant workers are in a situation of vulnerability. So on paper, migrant workers have the same rights as Nova Scotians, as Canadians. But in practice, we see that that’s not actually the case…. So it’s really through the structure of this program, which relies on their temporary immigration status – this really puts them in a very difficult situation, where it’s hard to speak out for their rights.”

Along with basic relationship building, a lot of No One Is Illegal’s work so far involves a range of mutual aid and solidarity. They meet regularly with individual migrant workers, and with groups of them, and provide whatever support they can – translation, advice, support dealing with the paperwork and institutions of the various systems they have to navigate in Canada, help publicizing issues, and so on. In practice, because of the risks involved, they have encountered far, far more workers who need support in dealing with mistreatment from employers than feel able to speak publically about it.

No One Is Illegal also recently did a food box program for migrant workers. They regularly do know-your-rights workshops. They have increasingly been collaborating with groups in the communities where migrant workers live to hold events that bring migrant workers and Nova Scotians together and that support migrant workers, and they are keen to do more of that in the future.

The group is also part of larger advocacy campaigns such as those led by the Migrant Rights Network calling for permanent status in Canada for all migrant workers. At the moment, they are building a base of support in the riding of federal Immigration Minister Sean Fraser in Antigonish, Nova Scotia, to put pressure on him around these issues. As well, they are engaging in advocacy around a range of demands at the provincial level, including the need for paid sick days, a higher minimum wage, access to public health care and to statutory holiday pay for migrant workers, and better access to provincial programs that would give migrant workers a path to permanent residency.

Image: Used with permission of No One Is Illegal – Halifax/Kjipuktuk.