Seeking healing, justice, and change in the wake of the convoy occupation

Seeking healing, justice, and change in the wake of the convoy occupation

Seeking healing, justice, and change in the wake of the convoy occupation by Scott Neigh -- Talking Radical Radio 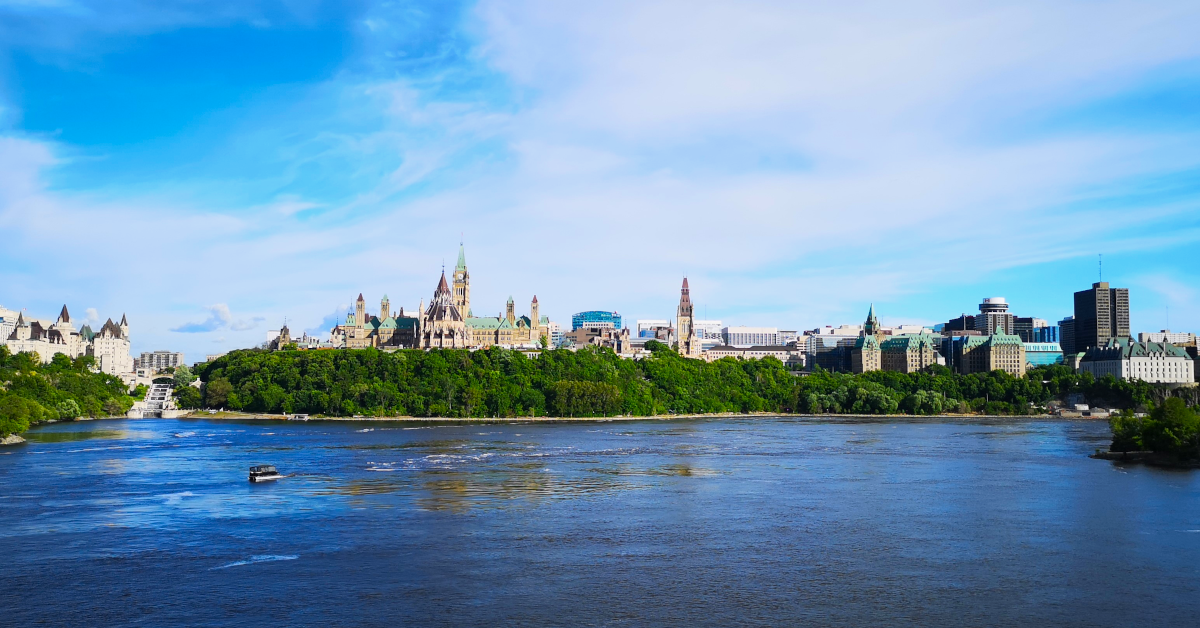 Debbie Owusu-Akyeeah and Gaëlle Muderi are long-time residents of Ottawa who are involved in the Ottawa People’s Commission on the Convoy Occupation – Owusu-Akyeeah as a commissioner and Muderi as project coordaintor. The commission is a grassroots, nonpartisan initiative to listen to the voices of Ottawa residents in order to chronicle what happened in the city during and after February’s convoy protest, and to document its impacts on the people who live there. The goal is to contribute to community healing and justice, and to produce a report that, unlike the other inquiries and commissions related to the convoy, will prioritize the experiences of residents. Scott Neigh interviews them about the convoy, the community response, and the work of the commission.

In February 2022, the so-called convoy protest descended on Ottawa and went on to occupy its downtown for weeks. The narrative coming from the protesters was that this was a spontaneous uprising primarily by truckers against vaccine mandates – a narrative that the mainstream media has often uncritically reproduced, particularly in the protest’s early weeks. However, it is not a narrative that has proven able to stand up to much scrutiny, and not just because of the protest’s relatively minor connection to actual truckers. Admittedly, genuine discontent related to the pandemic and to the government’s handling of it combined with actively propagated misinformation about COVID-19, vaccines, and other issues to give the protest’s messaging a substantial reach. But Owusu-Akyeeah said that among people on “the grassroots side of things,” it was clear from the start that the occupation was about “more than just vaccine mandates, and that there was something a little bit more insidious behind the trucks and what their presence might mean in Ottawa.” Already in January, material had been published demonstrating that many key convoy organizers had a range of connections to far-right and white nationalist politics, and the convoy was likely a way to recruit more people into their sphere of influence. Indeed, this was only the latest in a series of much less successful convoy protests with other focuses (and often with connections to the oil industry) organized by such figures in earlier years.

The occupation’s impacts on residents of Ottawa were profound. The lives of those living in the city’s downtown were utterly disrupted. And particularly many who are Black, Indigenous, racialized, disabled, and/or LGBTQ+ reported feeling unsafe in their own neighbourhoods during the occupation, and frustrated by the seeming inability or unwillingness of governments and institutions to do anything about it. As a result, both during the convoy occupation and since, community members in Ottawa have, in Owusu-Akyeeah’s words, been “taking the lead” in working to organize and mobilize themselves to support each other, to defend their communities, and to voice their dissatisfaction with both the convoy and the government.

In the aftermath of the convoy, a number of official investigations and commissions were promised – most visibly, the official inquiry into the Liberal government’s invocation of the Emergencies Act, which is currently ongoing. Muderi described “the scope of the inquiries currently happening at the federal level as well as at the municipal level” as “limited,” particularly “in its ability to hear from a wide array of residents who were affected. … There hasn’t been a venue for residents who were negatively affected to speak to the traumas and losses that they had, and to hold to account the officials that were not able to guarantee their public health and safety at that time.”

Another key feature of the community response during the occupation, Owusu-Akyeeah said, was residents “taking advantage of online spaces where they can converse, almost like miniature digital community town halls.” In the context of the poor response to the occupation by governments, she continued, “these community-focused spaces were an opportunity for us to share information, mobilize, but then to also come together to talk about, what are you seeing, what are you experiencing?” It is out of these grassroots conversations and the associated mutual aid networks that a group of local residents with the support of a number of smaller local institutions – most prominently the community health centre in the area – have launched the Ottawa People’s Commission.

Owusu-Akyeeah said that among people’s many frustrations with the occupation and with how governments responded to it has been that since then, “whether it was the city [or] the country, decision-makers wanted to move on as if this didn’t happen.” She said that when the commission was first announced, “people’s response was, thank-you, because we can’t forget what we went through and this is an opportunity for us to do some kind of collective remembering.”

The People’s Commission has been holding public hearings in person and online since September, collecting testimonies from residents. They are holding community consultations with groups that were particularly affected, such as Asian seniors; people living in shelters; Black, Indigenous, and Muslim communities; and queer and trans folk. And they have been offering a range of other ways for people to share their experiences in safe settings, including privately and in writing.

Muderi said that the commission has “absolutely” experienced active opposition from far-right formations and their supporters. In addition, she said, they have seen “the rise of online harassment, and of folks expressing their fear to come forward due to the online harassment that has taken place surrounding the subject of the convoy occupation.” Part of their response has been to offer “a space for those who support the convoy occupation to speak to their experience… We have been willing to hear from them as long as it happens in a context of respect, and of validation of other people’s experiences. … But it’s certainly not something that we take for granted, that people will continue to peacefully engage with us when they disagree.”

In addition to her role as a commissioner, Owusu-Akyeeah is the executive director of a national nonprofit dealing with LGBTQ+ issues, and she has been active in both organizational and grassroots ways around gender-based violence, queer and trans issues, police violence, and racial justice. Project coordinator Muderi, who lived in the area directly impacted by the convoy, has worked in communications for both governments and community organizations. Along with Owusu-Akyeeah, the other three commissioners are former Secretary General of Amnesty International Canada Alex Neve, former United Nations Special Rapporteur on the Right to Housing Leilani Farha, and award-winning author and human rights activist Monia Mazigh.

Public hearings and other methods of collecting public testimony will continue into December, and the process of producing a final report will begin in January. The report will include a detailed account of what residents endured during the occupation and a range of recommendations for all levels of government and other institutions.

Owusu-Akyeeah said that “everybody’s been sharing impactful testimonies” but she found a recent online session featuring six disabled residents of downtown Ottawa sharing their experience during the convoy to be particularly powerful. “There’s just something about looking at it from the perspective of disability justice, and how deeply embedded the ableism is to the very infrastructure of the city.” And in the official responses to the occupation, “the ableism was there.” Governments showed no awareness of or interest in the specific impacts of the occupation on disabled people, and made no particular efforts to support them. But, Owusu-Akyeeah said, “One of the things that really showed across all of the testimonies we’ve heard is how community was filling the gap of protection and support.” Broader grassroots efforts to fill that gap still sometimes failed to meet the needs of disabled people, and disabled people supporting each other ended up being crucial.

Another key focus of the commission’s work is the response to the occupation by the police. Both during the occupation and since, and also in the context of what residents have been telling the commission, there has often been a division – sometimes explicit, sometimes not – between those who see the answer as more and better policing, and those who recognize the profound problems with such a response. As is true of most police services, that in Ottawa has a long history of violence and racism against residents.

Owusu-Akyeeah said, “[During the occupation] I was very vocal in pointing out the discrepancy and the hypocrisy in the city’s response to what I like to talk about as different forms of dissent. You know, we’ve had examples of Black and Indigenous folks organizing, again, around police brutality that were responded to by the police very harshly. And then we saw in comparison the lack there of a response during the occupation.”

She continued, “I think what has been an interesting thing to observe – and I’m speaking as someone who has lived experience as a Black queer person – is that we are noticing that some people who may have been indifferent to calls to look at policing from a critical lens have finally caught up and finally get it, based off what they experienced in not having the police respond to them when they were in a moment of crisis. And I don’t want to frame this as, like, an ‘aha, gotcha’ moment. But I do think there’s something to be said about people experiencing this for the first time, and that shifting their thought process, the way they they think about this particular institution…. And in terms of what it means for a solution to it, we will see. But I do think that that is a key thing for us to continue to look at.” While it is unlikely that the commission’s final report will be able to resolve all of the questions and tensions related to policing, Owusu-Akyeeah hopes they are able to use it to “maybe open up a different conversation” about those issues.