Infrastructure and support for climate justice organizing across Canada

Infrastructure and support for climate justice organizing across Canada 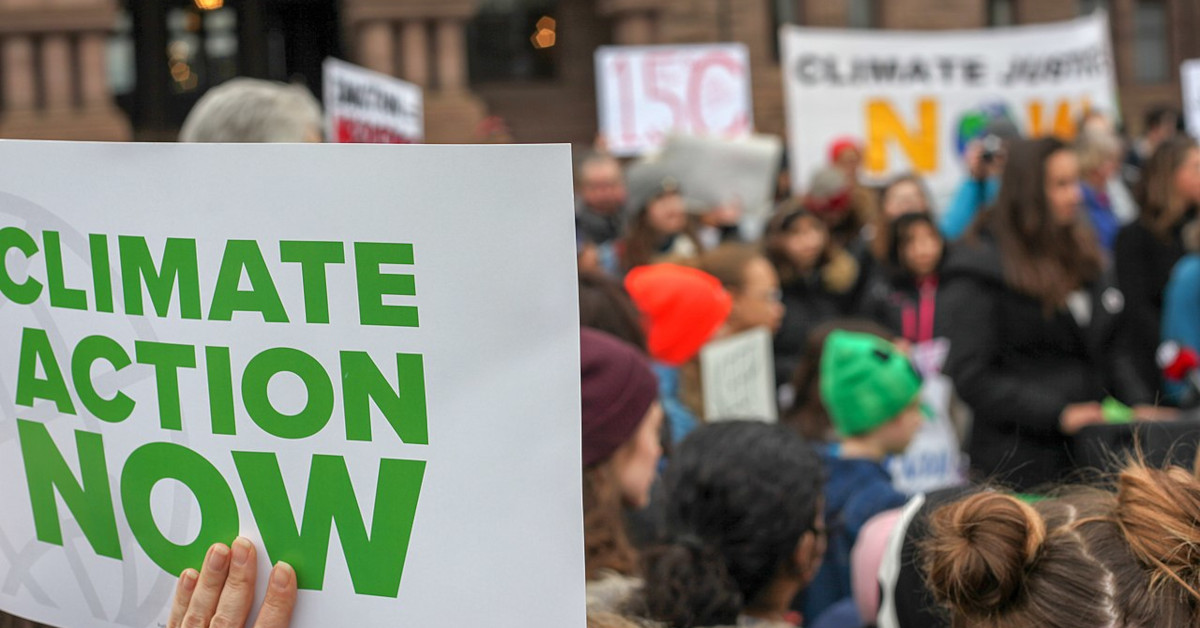 Jacqueline Lee-Tam is the director of the Climate Justice Organizing Hub and Sara Adams is its anglophone coordinator. Scott Neigh interviews them about the work of the Hub providing supports to grassroots organizers across so-called Canada.

The moments of social movement struggle that make mainstream headlines are just a tiny fraction of what movements actually involve. Even accounts that acknowledge that without a certain amount of work to organize and mobilize, the railway line couldn’t be blocked, the picket wouldn’t be strong, the tens of thousands wouldn’t show up to the demonstration, often fail to capture everything else that goes into making such moments possible.

There’s a lot to that “everything else,” but one element of it is a range of kinds of social and physical infrastructure – “infrastructure of dissent,” to borrow a phrase from radical sociologist Alan Sears. All movements need it, these days we don’t have much of it, and today’s interview participants are part of a project that is a particular form of it.

Lee-Tam got her start in anti-pipeline struggles as a high school student in Vancouver. Adams was involved in environmental activities in high school, but really plunged into climate organizing as a university student in Ottawa. Both now live in Tiohti:áke (or Montreal), where the Hub is based.

Lee-Tam described the Hub as “a support structure for grassroots organizing” across so-called Canada. She explained, “Folks come to us with their questions and their roadblocks when it comes to organizing, and we help them move through those roadblocks.” They use training, workshops, coaching, mentorship, events, peer-to-peer learning, and online tools to support and build capacity among organizers. They are also bringing a wide range of resources related to organizing together in a Hub wiki, a sort of “archive of activist knowledge that is ever-growing.”

The Hub was founded by Tom Liacas, who has a history of involvement in grassroots activism and organizing, and has worked extensively in the NGO sector. He saw a need in grassroots contexts for the kinds of supports that the Hub now provides, and he was pretty sure that his experience in the world of foundations and funded organizations might allow him to access the resources required to set something up to provide such supports. And he was right – he got some funding, got the Hub going, passed leadership along to younger activists embedded in a range of movements (including Lee-Tam and Adams), and moved to an advisory role.

A key factor that enabled the founding of the Hub was a shift in the priorities of funders. Historically, foundations concerned with the climate crisis have mostly put their resources into NGOs and into things like research and policy development – approaches that are institutional and, in a certain sense, “safe,” according to Lee-Tam. But the youth-led climate movement upsurge in 2018 and 2019 shook things up. It created an opening in climate-focused institutional spaces to recognize what activist and organizers have always known – that real change is powered not by NGOs but by the grassroots.

Lee-Tam said, “Oftentimes, people think that the win happens when a policy is passed. But if you look at the timeline preceding that win, there’s almost always grassroots organizing that put the issue on the map in the first place.” The youth climate movement pushed funders to recognize that “the grassroots space really can achieve a lot. They have people power that is necessary to really push the dial on issues and to build up the public pressure necessary to force the hands of politicians.” She said it remains “an uphill battle in terms of making the case – helping funders to realize the importance of grassroots organizing” – but there is a somewhat greater openness today.

In its first year, the Hub worked mostly in French and exclusively in Quebec, and only at that point expanded its focus to include English Canada. Its approach has been to begin by talking with people already doing grassroots activism and organizing, to find out what questions they have about their work and what difficulties they are facing, and to build programming to address those things.

The organization launched in 2020, the first year of the COVID-19 pandemic, so some of its initial work was responding to things like the transition to online and distanced organizing. But a lot of it has been about what Lee-Tam described as “the eternal questions of grassroots organizers” – things like, how do we structure ourselves? How do we work together? What does it look like to think strategically? How do we deepen and broaden our analysis? How do we navigate conflict? And so on.

Lee-Tam said, “We started building out programming that responded to these most frequently asked questions, and did ad hoc coaching and mentorship with other questions.” They currently work with about 2500 organizers from across so-called Canada, and are keen to connect with more.

According to Adams, the landscape of the climate movement looks very different today than it did during the pre-pandemic upsurge. She said, “2019 was this incredible year of momentum and this height for the climate movement that was unprecedented. And then we have the onset of the pandemic and other crises intersecting with it as well.” Because of that, today is “a time of rebuilding, of figuring out how to put the bricks back in place and … how we move in this space, and how we welcome more people into this space, how we build more solidarity and power together.”

A crucial element of the Hub’s work is its expansive understanding of the kind of organizing that the climate crisis requires. Adams said that “decarbonization and cutting down on emissions” is “not enough.”

She explained that a too-narrow focus on emissions “is not actually getting to the structural issues that are creating our moment of crisis – of what I’ve also heard referred to as 'permacrisis,' or continual intersecting crises of economic inequality, racial inequality,” and other axes of oppression.

“They are not all separate struggles or separate issues, but they all are coming to a head and are all connected to the climate crisis and to creating the climate crisis. And a knowledge of that intersection of all of these crises is essential to realizing that our way out of this is solidarity between movements, solidarity between all of these struggles, between these communities.” We need to move forward “by building power together, by linking these issues, and realizing that we need a convergence of struggles, of people, of communities to come out of this, to build the people power necessary, to take to the streets, to put the pressure, to create alternatives, and to fight for them – alternatives to the current order.”

Lee-Tam summarized, “What we need to build is a movement of movements.” She argued that there is both a “moral imperative” to build solidarity with many different struggles but there is also the “strategic side.” She said, “If we are going to win, we need the people power to win. And a siloed climate movement that focuses only on emissions reductions, or [electric vehicles], or whatever, is not going to have the broadest reach that it needs to win. And so, necessarily, the focus moves away from, say, emissions reductions to being a more complex vision of the world that we want.”

Along with the general work of “rebuilding capacity” and “bringing people in,” Adams sees a few different kinds of work happening today in different contexts across the climate movement. Indigenous solidarity remains vital. Particularly on campuses, organizing for divestment from fossil fuel industries is a big priority. And in a lot of places, climate organizers have turned their attention to “local struggles” and “campaigns on material conditions close to home.” This includes struggles focused on things like housing and transit, approached through a climate justice lens, and on a vision of change based on “talking to and working with our neighbours.”

The work towards the next big climate movement upsurge seems to be particularly promising in Quebec. Lee-Tam said that a group of youth climate organizers are “building up towards an unlimited general strike” among students. She said that some folks who are involved in the Hub and its community are part of that work. In addition, there is a youth-led initiative calling on students to reduce their course load or even drop out entirely to spend their time on climate movement work. Because of differences in cost of living and social supports, such an initiative is possible in Quebec in ways that it would not be in other parts of Canada.

As well, Lee-Tam said, “Obviously, this is not something that everyone can do. But it’s a really cool initiative that’s collecting testimonies of people who have grappled with this idea, people who’ve tried it, people who are doing it, and we have a number of team members who work part-time at the Hub, but conserve a lot of their time as well for organizing.”

Across all of these different kinds of work, and across so-called Canada, Adams said, “Groups are in need of support at this moment – and always, but especially at this moment of rebuilding. And so that’s where we come in.”

She continued, “Fundamentally, the Hub is about capacity building and education, of transferring knowledge, of giving folks opportunities to skill up, to understand their role within the social movement ecosystem, their strengths as individuals and what they can bring to these spaces that also brings them joy, that also brings them sustenance, and that brings them community, and that keeps this work sustainable for themselves and for their communities.”

Their work aims to provide “resources that really fundamentally get down to thinking intentionally about how we make change happen at a structural level, how we design – intentionally – processes, campaigns. And then also things like how we show up for disability justice in our spaces with access culture, how we show up for racial justice, how we build anti-oppressive systems into our organizing, so that we can win and work together and build solidarity in the ways we need to affect change.”

“That’s really where the Hub comes in,” she concluded. “We want to support grassroots groups move through these big questions, these big visioning and structural conversations, with the tools and the knowledge and the history necessary to make sure they are effective.”

Please read about the big changes coming for Talking Radical Radio in 2023!