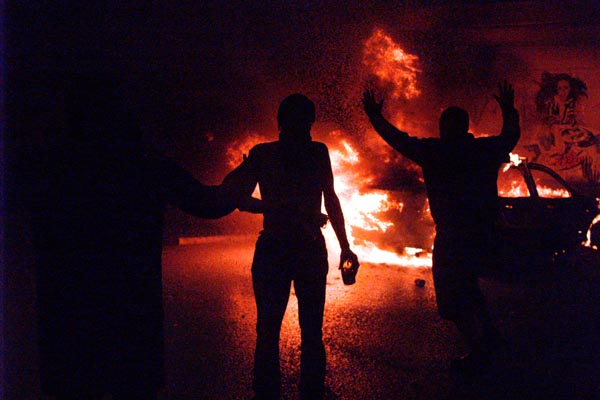 Many tens of thousands of people faced off against riot police, tear gas, horses and K9 units in downtown Vancouver after the Canucks lost the Stanley Cup final to the Boston Bruins 4-0.

"Those criminals and anarchists hide behind the large number of people," Chu said. "They were looking for that opportunity."

Chu's statement follows one media commentator's allegation that, "These are people that we've seen in the past associated with the Black Bloc so-called anarchist group that targeted the Bay one year ago during the Olympic Games. So these are people who are organized, who plan for these things."

Organizers across the country have also commented on the disparity between police treatment of hockey riots and G20 protests last June - despite significantly more property damage in Vancouver, a tenth the number of people were arrested as during the G20, and most of the latter were on a different day.

The post-hockey game crowd was declared illegal and police broadcast a riot announcement starting around 10 p.m. - "We will deploy our canine unit if you do not leave. Please do not stay here, you must leave." However, by 11 p.m. police had still not significantly acted, although several rounds of tear gas were fired, and one witness saw a police dog attack a person.

Hundreds of people were reported to have sought aid at a nearby hospital for injuries, and four stabbings were reported. By 2 p.m. most people had been arrested or cleared out of downtown. The number of arrests is unknown.

Mainstream media outlets such as CBC and CTV alleged on newscasts that "Black Bloc anarchists" might be responsible for the mayhem, without providing any documentation of this suggestion (see footage below). Some have also questioned the disparity between widespread media condemnation of several broken windows at The Bay during a 2010 Olympics protest, versus much more substantial looting and destruction of the same store last night.

Most people expressed dismay at the rioting and looting.

"Vancouver should be ashamed right now," said one woman, who asked to remain anonymous, as a plume of smoke rose behind her from Georgia and Seymour Streets. "They're rioting over hockey? Why doesn't anyone riot for health care or something important?"

Several parked cars were set alight, and burned for several hours before firefighters attempted to douse them from several stories up inside a parkade.

"I live right there," said a man, who also would not give his name. He was walking on Seymour Street when firefighters doused him with chemicals destined for a burning car nearby. "I can't even get home. All I want to do is go home."

However, many expressed enthusiasm for the chaos, chanting "F**k Boston!" and, as the night wore on and police responded more and more aggressively, "F**k this police state!"

"This is how we celebrate," said a man wearing a Canucks bandana over his face, who participated in the riot but would not give his name for obvious reasons. "This is '94 all over again."

He was refering to the last time the Stanley Cup final came to Vancouver in 1994, when riots broke out. Damage this time around is estimated to be significantly higher.

But one man, who asked not to be named, shouted, "Take back the streets! It's a police state!" through a traffic cone, and suggested that losing the hockey game was only a pretext for young peoples' anger.

"People want to just riot because the Bruins won," he said. "But police fired the first tear gas right here before any of these windows were smashed, against people who were just standing around having a good time.

"People don't even realize the state we're in - they are further and further imposing a police state. Martial law is getting more and more upon us, and people are realising it."

Most of the Canucks playoff games prior to the final had gone without incident, although on June 13 a musician was attacked by police officers despite having a valid busking permit. Marc Stokes was rapping on Granville Street when police ordered him to leave, claiming that even licensed buskers were forbidden from performing during Stanley Cup games.

"Then he just grabbed me," he told the Vancouver Sun. "A whole bunch of cops piled on me and attacked me." (Read more on Stokes' case: http://www.vancouversun.com/entertainment/Busker+paradise+turns+ugly+rapper/4936152/story.html#ixzz1PQanThW2)

News media video capture in which a media outlet alleges without evidence that the riots were planned by "Black Bloc so-called anarchists" who had planned the riot "for some time":