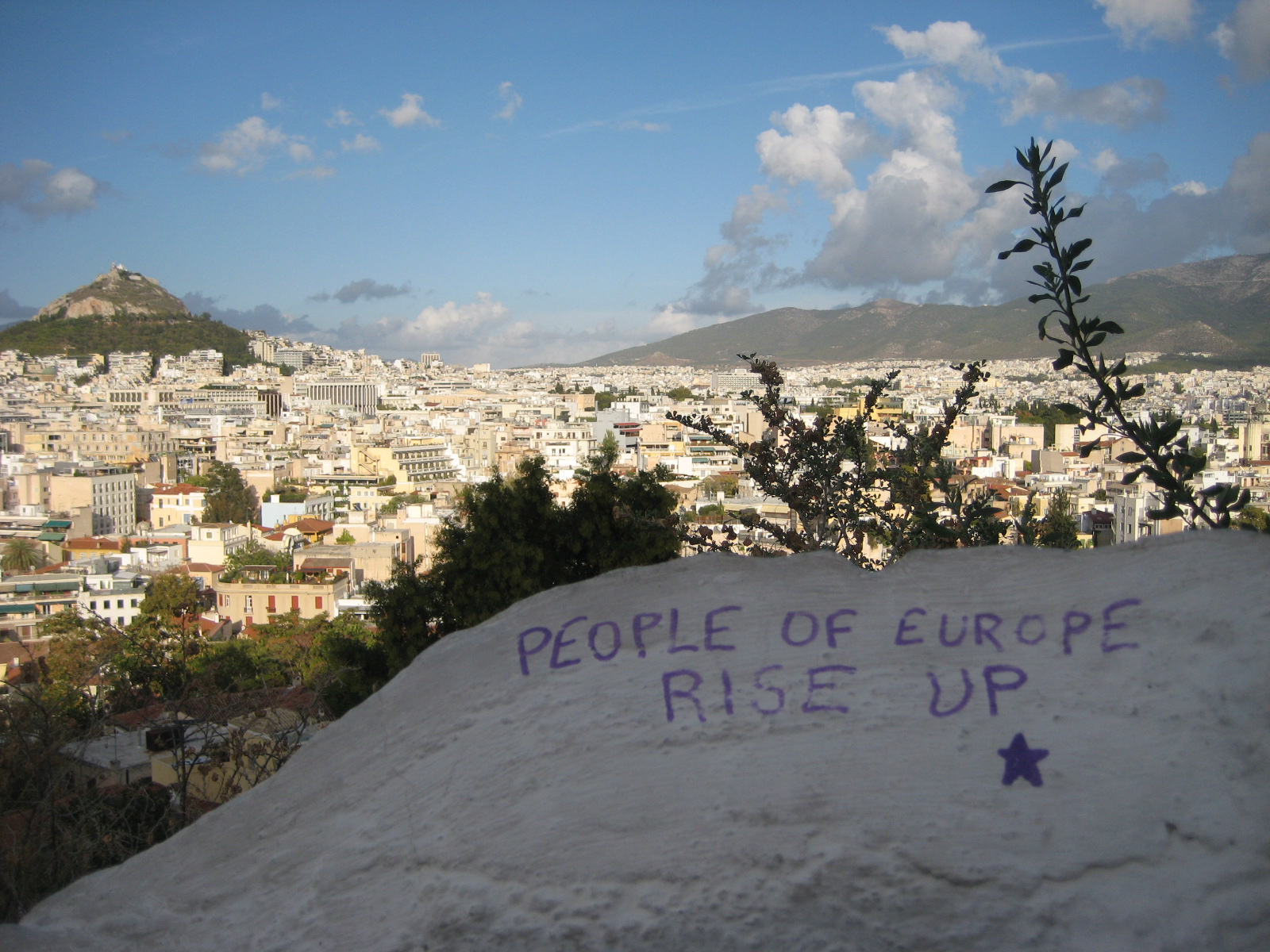 Note: Many of the posters depicted were photographed in a one block radius in Athen's Exarcheia district and can found on almost every street.  Exarcheia is well known as an anarchist neighbourhood.  Bombing and arson of government and business locations throughout Athens is often thought to originate from its residents.

Several strikes have hit the country recently including a 24-transit strike in Athens on Monday, a Athens general strike on Thursday and a Sunday-scheduled suspension of all national boat services this coming Sunday.

1.  Graffiti is rampant in both Athens and all over Greece.  A variety of slogans (including several devoted to the Palestinian conflict) can be found on almost every corner in almost every neighbourhood.  In tourist areas, slogans will often be written in both Greek and English.  This was taken from near the Acropolis in Athens.

2. A poster from the Communist Party - KKE.  The KKE are Greece's oldest political party and garnered 7.5% of the vote during the last elections (good enough for 3rd place).  This poster decries the death of a communist party member, Nikolaos Zachariadis, at the hands of the Soviet Union in 1973.

3. A poster for a radio station in Athens.

4. A demontration poster in Exarcheia.  (When asked for a translation, a resident told me "It would be too complicated to explain to you what this means in English.")

8. This image appears almost everywhere in Athens, though no one could say what it referred to.

10. Anti-police Graffiti in Exarcheia.  Half a block from this image, Alexandros Grigoropoulos, a 15 year old student was killed, which lead to mass rioting and demonstrations in Greece in December, 2008.

11. Park Exarcheia.  Also roughly 50 meters from where Alexandros Grigoropoulos was killed.  In March 2009, roughly 1000 residents of the neighbourhood overtook a parking lot and turned it into a self-organizing park, maintained by the City's residents.  The concrete was broken up, plants were put in and the park wa taken over in a roughly 24 hour period.

14. Park Exarcheia - a poster in front of the park (was unable to get a translation).

16. Newspapers.  Greece has one of the highest paper to population ratios in the world with over 30 national daily's in a country with a populaion between 11-12 million.