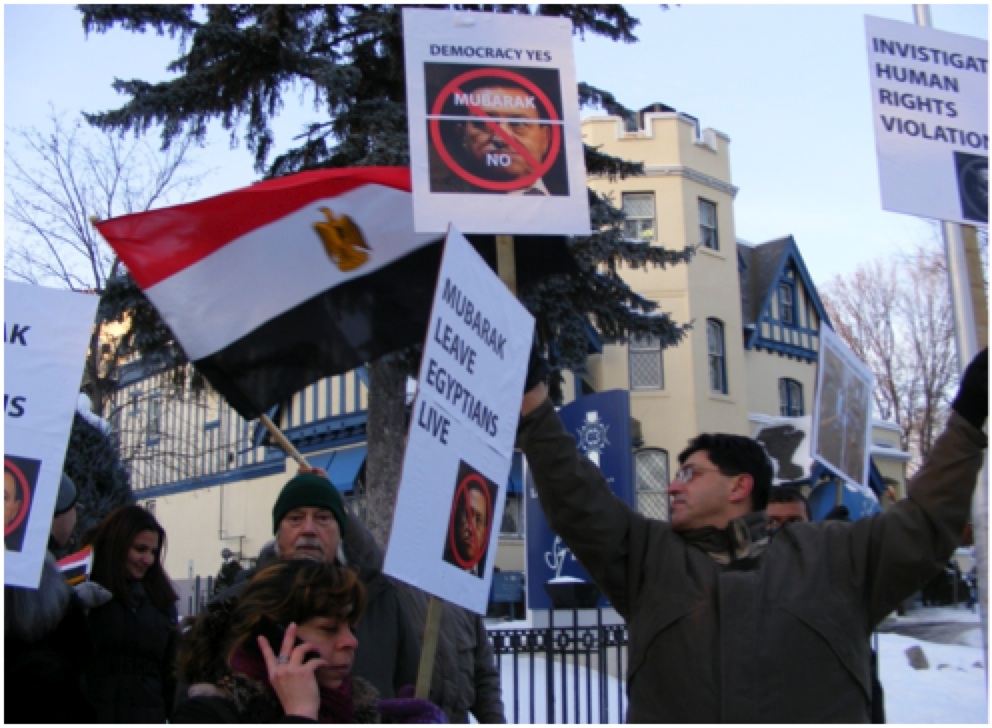 On a cold, chilling weather day in Ottawa, nearly 200 protesters gather in support of the “March of Millions” for Egypt in front of the Egyptian Embassy on Tuesday, February 1st. Their concern? Dismantle the current oppressive regime ruled by Egypt’s current president – Husni Mubarak, who has been holding power for over 30 years since his election in 1981. The Ottawa protesters are amongst the millions of Egyptian citizens rallying for democracy in Egypt on the streets of Egypt since January 25th.

People of various nationalities – Arabs and non-Arabs, and age groups – children 5 years of age to elders of nearly about 70 years of age, joined in solidarity with Egyptian citizens who rally everyday in Egypt in hopes of bringing down the president and following the footsteps of Tunisia. One man walks up to a group of women and says, “Have you seen the latest news? Mubarak says he will not elect himself and run for presidency this time?” They all laughed and said, “Thats what he says every time and ends up re-electing himself.” Everyone at the protest was conversing about the speech Mubarak gave concerning his ‘step-down’ from power and not re-electing himself and found it to be his usual, repetitive joke. They were all angry, frustrated and irritated at Mubarak’s dictatorship and his constant, repetitive speeches that he usually gives before every election that he would ‘step-down’ from power. Everyone knew he had plans to elect his son to run for presidency after him. Shouting, the protesters were enchanting both in the Arabic and English language: “Leave Mubarak, Leave.”, “Mubarak, you coward leave. We will not leave you the ‘playground’ so leave”, “Oh you coward leave! The Egyptian blood is not cheap”, “The people want the Fall of the president”, “Stephen Harper Speak up loud, Egypt wants freedom now!”, “We Will Bring Mubarak Down! Our Hands will remove his crown”, “One million people march downtown, tell these people wear the crown”, “One million people March today. From our past, we shall not stray”, “Husni Mubarak go to Saudi, Ben Ali is waiting to say Howdy”... etc. The protests continued to repeat these lines amongst others, while also having moments of singing Egypt’s national anthem.

As much as people were angry and frustrated, they were able to find humour in the subject matter. A man, who was one of the main chanters and organizers of the protest said in Arabic, “You all know how much Egyptians like to joke. Do you want to hear a joke? One time, a man held presidency power and stayed in it for 30 years!” Everyone laughed knowing who he was referring to. As much as it was a cold, body-numbing freezing weather, the activists and everyone protesting were committed to the cause and able to hold it together, stand strong and raise their voices loud to be heard in solidarity with the Egyptian citizens. Mubarak’s regime thought it can suppress dissent through blockading major internet sites such as Twitter and Facebook which were used to organize the demonstrations, but he underestimated his own citizens and their anger as the anti-government movement is growing in numbers – increasing by millions of citizens each day.

The protesters in Ottawa did not just want to be heard by the Egyptian embassy and/or government, but they also wanted all Canadians and the Canadian government to show support and urge for democracy in Egypt. Amongst the supporters of the rally in Ottawa was Paul Dewar, who is a member of the parliament and runs the NDP head office in Ottawa, and supports the anti-government movement in Egypt. Some, who do not understand the roots of the anti-government movement say “why join a movement for Egypt when you are not Egyptian?” Or believe that you have to be Egyptian and Muslim to be part of a growing movement but this is not a religious or nationalist movement, this is a fight united by everyone of all nationalities and religions against corruption and an oppressive regime. It is a class war, where the poor and the middle class are sick and tired of being oppressed, silenced and unable to live a standard, descent life where even their basic fundamental human rights are non-existent. The oppressed citizens have been silenced and afraid to fight for too long, and now their patience has expired, leaving them hungry for change and caring less for their lives and the consequences that come about from their fight because victory will taste so sweet in the end and it will come through all costs. Victory will be theirs.