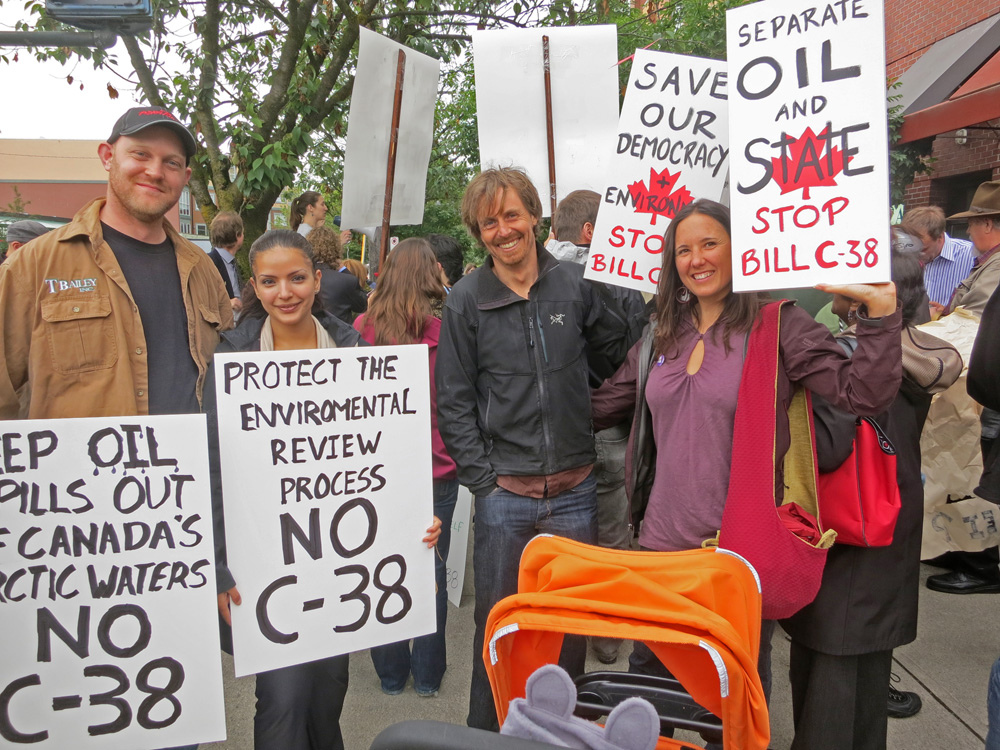 The Harper government is trying to quickly pass, without debate, one of the most destructive pieces of legislation in Canadian history.

Bill C-38, also know as the Omnibus Bill, is the "Jobs, Growth and Long-term Prosperity Act," introduced on April 26 to implement the 2012 Federal Budget. It introduces, amends, or repeals some 70 federal laws in a single bill, and the Conservative government has motioned to limit debate.

Critics, including former Conservative ministers, say it undermines democracy by repealing, amending or overhauling so many pieces of legislation in one bill, without allowing time for debate.

The Bill has already passed a second reading, and is currently being studied by the House of Commons finance committee. It is expected to pass as early as this Thursday.

3. Bill C-38 amends the Coasting Trade Act to allow increased off-shore seismic testing and drilling. Less than two years after such drilling was put on hold due to the BP oil spill in the Gulf of Mexico, the Conservative government announced 905,000 hectares of Arctic watersopen for bidding.

5. Bill C-38 will also make changes to the Temporary Foreign Workers Program, Old Age Security, and will repeal of the Fair Wages and Hours of Labour Act - all of which are expected to depress wages, especially in already lower-paying jobs.

10. Bill C-38 includes amendments to the Employment Equity Act which eliminate the requirement that federal contractors apply employment equity provisions put in place to protect groups that have experienced discrimination, including women, Aboriginal peoples, visible minorities and persons with disabilities.

The Conservatives are trying to pass Bill C-38 as quickly as possible, and before Parliament breaks for the summer.

Protest actions are currently underway throughout Canada. The #BLKMRK campaign, powered by Leadnow.ca, held actions in front of Conservative MP offices across the country on Saturday, June 2. On Monday, June 4, as part of the 'Black Out Speak Out' campaign, 100 organizations blacked out their websites to protest the budget bill and draw attention to attacks on environmental groups and charities.

The Green Party has called on Canadians to sign a petition against Bill C-38. Opposition MPs are currently attempting to filibuster the bill by proposing hundreds of amendments when the legislation returns from the finance committee for a final vote this week. Yesterday, in an action spearheaded by Leadnow, communities across Canada held "13 heroes" demonstrations, to urge 13 Conservative MPs to stop the bill.

Blocking Bill C-38 and the Conservative government's destructive corporate agenda will require that we build strong solidarity across movements for social, economic and environmental justice.

In Quebec, students, parents, teachers, workers and neighbours are showing that even with a majority government, legislation can be slowed down or even reversed.

Imagine what we could do across Canada by taking action together.

Chloe Makepeace is an activist who works in the fields of biodiversity, environment, and ecological agriculture. She is a member of the Montreal-based grassroots solidarity collective “Justice for Missing and Murdered Indigenous Women” and the 2110 Centre for Gender Advocacy.

For more information on what you can do to oppose Bill C-38, you can join the 'Oppose C-38' Facebook group. For information on other upcoming actions, visit LeadNow.ca.