How can we today, invite the defence of social movements?

How can we today, invite the defence of social movements? 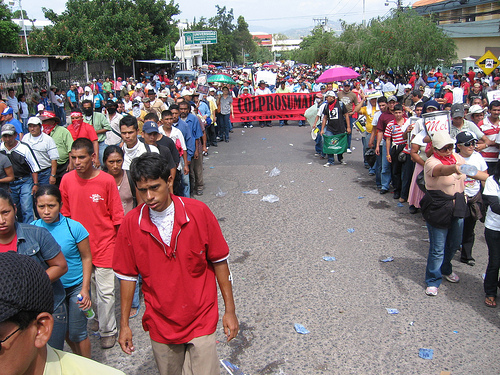 What to do about Honduras from our networks today that Zelaya arrives back and that the writing in the wall says bloodshed?

There is so much floating around that I have been overwhelmed at even keeping up. Lots coming from Honduras, ALAI has published quite a bit etc. I am on call at a hospital, and rushedetween places... This one, for example, is a great piece that gets it right.

"There are 2 governments and two Presidents. Both have solid reasons behind them. This is a deadlock that will lead to or has lead to bloodshed. The US and the "international community" are in a difficult position to intervene. Most couuntries and governments support Zelaya. The US promotes dialogue"

The -almost certain- outcome (intended) will be that the bloodshed will allow for the destruction and dismantling of the social movements and grassroot processes and the brutal repression of a popular mobilization that is better, larger and more important than Zelaya. The target of all this is, like in Haiti, the destruction of popular movements and resistance to the model. While we argue and wonder and declare, they kill and repress and destroy! Those behind what is happening there and who will benefit from the process, need time and a legitimation through distorted facts and propaganda, to carry out the destruction and to legitimize a cover-up process distracting public and international opinion from the real issues. After terror and confusion, some kind of stability will be created and the "rule of law" will be reinstated, with or without Zelaya and to portray the US as a legitimate mediator (likely Canada will step in at that moment to promote dialogue and diplomacy, exploiting its "historical role" in peace promotion" so that it can get at its multiple corporate interests in the country and region). Under these circumstances, free trade or CAFTA can and will proceed and the mining, forestry, tourism, pharmaceutical marketing, Puebla Panama, Maquilas, Biodiversity exploitation, etc, will continue to have their base from Honduras into Central America and the Caribbean. Honduras is the Colombia of Central America. The untouchable beach head of the economic (military, ideological) project. Whatever happens, the outcome must be a protection of the model and corporate/financial interests. This is certainly not about Zelaya. But reinstating Zelaya soon and protecting and providing protagonism and visibility to the social movements and their struggle on the one hand and to the corporate interests on the other, will explain what is really going on and dismantle the show being presented that will allow the brutality of the free trade interests to destroy the lives and efforts of those seaking for dignity, alternatives and rights.

Just like in Iran, it is not about Mousavi or Ahmedinajad, but people who want freedom and are in a revolutionary moment because of the electoral juncture, Honduras is about a supperessed society that wants to breath and deserves to live. There is no revolution goping on in Honduras (nor in Iran). But thi is certainly a revolutionary situation, where peoples have come out from under the boot to say "we are here, we have dignity, we want the structure to change, we deserve our say"

What is needed is to push and promote this perspective so that the smoke screen doesn't blind us and everyone into accepting a bloodshed as an internal problem between factions of an elite and a populist leader. It is NOT about Zelaya...How can we today, invite the defence of social movements and people and demand as they are doing, that Zelaya is reinstated so that the reform process can continue to provide oxygen to the grassroots freedoms and rights? The struggle of the people in Honduras, is the struggle of humanity for dignity and justice. How can this be recognized. They are yelling it. They are dying for it. They want to live by it, and the world is wondering whether Zelaya is a good guy, or whether there are corporate interests and if Obama is for or against Zelaya!

I wrote this before, and I believe facts on the ground and developments are proving me right. I feel enormous impotence at witnessing yet another slaughter while people wonder if Zelaya is a good guy or not and which one of the Presidents is legitimate. Again, the usual: those uncivilized and undemocratic countries (banana republics) with their infighting and "we are suppossed to help?" When in fact "we" have caused the destruction of democracy, created the banana republic, placed dictators, toppled a government and will murder the true democrats and peoples from our collective arrogance and ignorance (that go together quite well) so that capital can run out with the profit as they have for more than 500 years.

[Photo of demonstrations in favour of the return of Manuel Zelaya, Tegucigalpa, July 4, by Sandra Cuffe.]