Rejection of the Coup in Honduras Grows

Rejection of the Coup in Honduras Grows 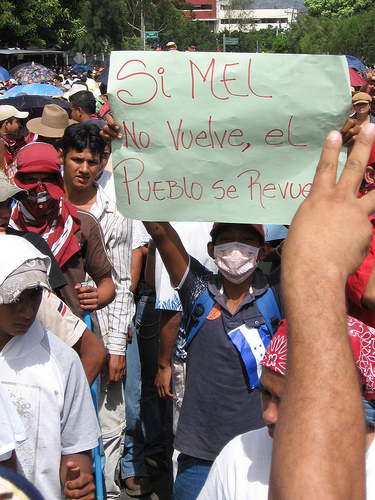 Hostility to the military coup in Honduras is increasing. So is the Harper government's isolation on the issue.

At Saturday's special meeting of the Organization of American States (OAS) Canada's minister for the Americas, Peter Kent, recommended that ousted President Manuel Zelaya delay his planned return to the country. Kent said the â€œtime is not rightâ€ prompting Zelaya to respond dryly: â€œI could delay until January 27 [2010]â€ when his term ends. Kent added that it was important to take into account the context in which the military overthrew Zelaya, particularly whether he had violated the Constitution.

Along with three Latin American heads of states, Zelaya tried to return to Honduras on Sunday. But the military blocked his plane from landing and kept a 100,000 plus supporters at bay. In doing so the military killed two protesters and wounded at least 30. On CTV Kent blamed Zelaya for the violence.

This was Kent's most recent attack against Zelaya. In June Kent criticized Zelaya's plan for a non-binding public poll on whether to hold consultations to reopen the constitution. "We have concerns with the government of Honduras," he said a couple of weeks ago. "There are elections coming up this year and we are watching very carefully the behaviour of the government and what seems to be an attempt to amend the constitution to allow consecutive presidencies."

With political tensions increasing in Honduras, two days before the coup the OAS passed a resolution supporting democracy and the rule of law in that country. Ottawa's representative to the OAS remained silent on the issue. Foreign Affairs took a similar position in the hours after Zelaya was kidnapped by the military. Eight hours after Zelaya's ouster last Sunday morning a Foreign Affairs spokesperson told Notimex that Canada had "no comment" regarding the coup. It was not until late in the evening, after basically every country in the hemisphere denounced the coup, that Ottawa finally did so.

Canada, reports Notimex, is the only country in the hemisphere that did not explicitly call for Zelaya's return to power. Unlike the World Bank and others, Ottawa has not announced plans to suspend aid to Honduras, which is the largest recipient of Canadian assistance in Central America. Nor has Ottawa mentioned that it will exclude the Honduran military from its Military Training Assistance Programme.

Ottawa's hostility towards Zelaya is likely motivated by particular corporate interests and his support for the social transformation taking place across Latin America.

From 1996-2006 Canadian companies were the second-biggest investors in the Central American country. It is unlikely that Zelaya won brownie points from the large Canadian mining sector - including Breakwater Resources, Yamana Gold and Goldcorp that are active in Honduras - when he announced that no new mining concessions would be granted. Likewise, Zelaya's move earlier this year to raise the minimum wage by 60% could not have gone down well with the world's biggest blank T-shirt maker, MontrÃ©al-based Gildan. Employing thousands of Hondurans at low wages Gildan produces about half of its garments in the country. While the political instability in Honduras initially hit the company's stock price, a Desjardins Securities analyst Martin Landry noted that in the long term the coup could help Gildan if it leads to a more pro-business government.

More broadly, the Harper government opposes Zelaya's gravitation towards the governments in the region leading the push towards a more united Latin America. A year ago Honduras joined the Hugo Chavez led Alba, the Bolivarian Alliance for the People of Our Americas, which is a fast growing response to North American capitalist domination of the region.

Two years ago Harper toured South America to help stunt the region's recent rejection of neoliberalism and U.S dependence. â€œTo show [the region] that Canada functions and that it can be a better model than Venezuela,â€ in the words of a high-level Foreign Affairs official. During the trip, Harper and his entourage made a number of comments critical of the Venezuelan government. In a coded reference to Chavez, Harper discussed a "Latin American dictator."

Demonizing Chavez is part of Ottawa's attempt to block the leftward shift in the region. Supporting the coup in Honduras is part of the same plan.

Yves Engler is the author of The Black Book of Canadian Foreign Policy and other books. If you would like to help organize a talk as part of a book tour in September Please e-mail: yvesengler [at] hotmail [.] com.