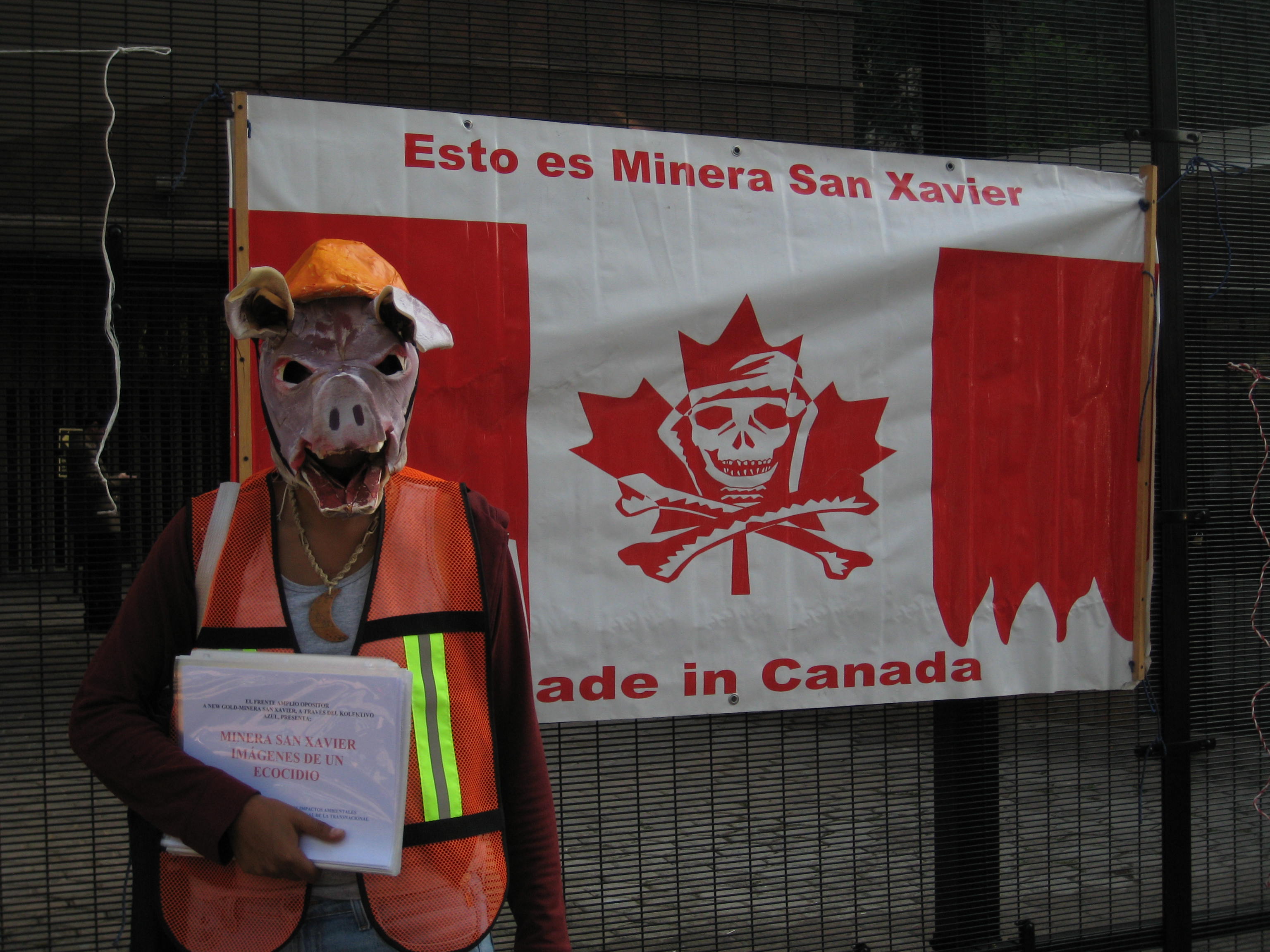 On the morning of July 21st, Canadian Embassy workers in Mexico City were greeted by an assortment of angry community members, paper-machÃ© pigs, anti-mining banners, life-sized rats and a photo-exhibit highlighting the impacts of a Canadian-owned open-pit mine.

The embassy was surrounded by a display of colourful resistance for the next 36 hours while communities affected by Canadian mining projects in four Mexican states staged a sit-in to mark the first Global Day of Action Against Open-Pit Mining.

The choice to stage a sit-in against open-pit mining in front of the Canadian Embassy was not arbitrary â€“ the Mexican government reports that over 70% of its mining concessions are owned by Canadian corporations. Many of these corporations have been met with widespread resistance, culminating in blockades, demonstrations and legal cases.

Among the most infamous cases of opposition to a Canadian mining project is New Gold Incâ€™s Cerro de San Pedro open-pit gold and silver mine. In commercial operation since 2007, the mine has been the subject of fierce resistance since a Canadian corporation purchased its concession 13 years ago.

Various legal cases filed by project opponents delayed the project, located in a 400-year old historic village 8 kilometers from a city of 1.5 million. The mountains surrounding the village were granted protected status because of their importance in refueling the arid areaâ€™s aquifers. When the corporation was issued an environmental permit, opponents took the matter to court.

â€œEven though a federal court determined that the project is illegal, the mine is still operatingâ€ said Federal Deputy Armando Barreiro at the embassy sit-in. â€œWeâ€™re here today denouncing that the federal, state and municipal governments are allowing the flagrant violation of our environmental laws. Corruption and impunity permits corporations to operate like this, not only in Cerro de San Pedro but all over the country.â€

Mexico has become a haven for transnational mining since the early 1990s, when a series of laws were reformed to accommodate NAFTAâ€™s entry into force. Collective property ownership regimes created at the time of the Mexican Revolution were dismantled and provisions to ensure public ownership of resources were stripped away, facilitating foreign investment. By 2006, close to 5000 Canadian corporations were either mining in Mexico or negotiating their first contracts.

â€œMexico, like other Latin American countries, is undergoing a new conquest,â€ affirms Sergio Serrano of environmental group Pro San Luis Ecologico. â€œToday theyâ€™re coming into our territories like they did hundreds of years ago, looking for gold and silver. And these riches will fill the pockets of Canadians.â€

Mariano Abarca Roblero, from the village of Chicomoseco in Chiapas, traveled to Mexico City â€œto tell the Canadian Ambassador that weâ€™re not willing to let them keep taking resources and destroying our environment.â€ For over two months, villagers have been blocking road access to Canadian corporation Blackfireâ€™s mine.

Roblero maintains that the corporation has failed to fulfill obligations in the contract it signed with the community. â€œFor years, theyâ€™ve promised us a million things and have given us nothing,â€ he states.

Members of the â€œAsamblea Popular del Pueblo de Oaxacaâ€ attended the sit-in at the Canadian embassy to draw attention to the struggle of communities against a slew of Canadian mines in the resource-rich state.

Although Cruz was badly injured, he was not recognized by state agents. He has been in hiding ever since, with 8 warrants for his arrest. One member of Cruzâ€™s group was not so lucky â€“ Sergio MartÃ­nez VÃ¡squez was found dead on June 7th, 2009.

â€œLife canâ€™t be negotiated,â€ says Cruz, referring to the communitiesâ€™ refusal to accept corporate bribes in exchange for accepting mines. â€œTheyâ€™re devastating our lands â€“ thereâ€™s nothing to negotiate.â€

Canadian officials also appeared to feel no need for negotiation. Ambassador Guillermo Rishchynski sent a staff member from the public relations department to receive the statement issued by sit-in participants condemning the embassyâ€™s support for open-pit mines. No official response has yet been issued.