Gimps Against the Games!

Gimps Against the Games! 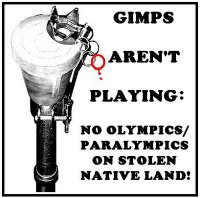 VMC: Why did Gimps Against the Games form?

Romham Gallacher: I was tired of seeing gimps used to sell the games (“inspiring”! “rewarding!”), the dearth of information out there about gimps who oppose them and why (“why on earth would you disabled people oppose the Paralympic games?! You must just be bitter that you can’t compete like those inspiring athletes!”), the unchecked ableism in anti-Olympics organizing like any other organizing [i.e. meetings/gatherings held in non-accessible spaces; no accessibility information being provided on events calendars; paternalism; the ableist romanticization & prioritization of specific kinds of direct action - actions that usually don’t take different bodies into account (both the risks of inhabiting a marked body in a fucked up ableist society & the actual limitations of those bodies).] I was tired of being told to "then organize something!" &/or "show up (to our non-accessible venues!) & we can talk about it instead of just complaining" and "we don’t have time/ money/ energy to deal with you/ with this," as well as being told by organizers that they didn’t even think about opposing the Paralympics, the how’s or why’s, and/or their fears about being seen as ableist for opposing them, while doing shit-all to figure it out.

I wanted to see other options: meetings, fundraisers, dances, panels, etc held in accessible spaces; gimps sharing our concerns/ideas/perspectives/resources/time/money/energy; creating connections with other groups and increasing our ability to influence other groups; organizing bunches of us to attend protests (for both protection and presence). Gimps are seriously impacted by the cuts, by the security zones, impeded by all the transit shut-downs, by all of it, and i wasn’t seeing any anti Olympics organizing acknowledging that at all. I thought if there was a bunch of us, we could go to events en masse and share ideas on making these groups and gatherings more accessible. It seemed like Facebook (pretty new to me) might be one way to get folks together. I wanted to not feel so isolated as a gimp, so unsafe, so unconsidered, and figured other folks might be looking for that too. So we started connecting in person, at accessible spaces, meeting up to take transit to demos together, checking in with each other, keeping each others’ backs until some other organizers decided to check it out too.

VMC: What is GAG's stance on the Olympics and Paralympics?

RG: GAG opposes the Enabled Olympics because of: the occupation of stolen Native land, “security” and eroding of civil liberties, environmental destruction and waste, corporatization, damage to communities, exploitation, lack of affordable housing, public costs and debt. GAG explicitly addresses that gimps are seriously impacted by the cuts, by the security zones, impeded by all the transit shut-downs, by all of it. GAG opposes the Paralympics because it feeds from the same trough as the Enabled Olympics, and are just as problematic. The Paralympics have been paired with the Enabled Olympics for 20 years; they are financially and ideologically bound.

VMC: What would you like to see changed about the two institutions?

RG: Personally, I don’t want them changed; I want them both disbanded. They’re a waste of time, money and energy. When governments can’t even get it together to create a national housing strategy, can’t keep disabled folks’ benefits even at the puny amount they’re at, are slashing our basic essentials like glucometers for diabetics, fresh water for folks living with HIV/AIDS, pre-made orthotics for those of us who require them to walk, slashing what was a pittance for dental care, shutting down already cash-strapped rehab centres and programs across the province, tossing people off of disability benefits (all that just the tip of the iceberg), but can spend $7Billion on a three week long ice skating party, something is seriously wrong. The games are irredeemable in my books. If folks want to support sports, why not put money into kids programs? Or, you know, just put back all the money lost from kids’ programs to make way for the Olympics?

VMC: What would you like Vancouver to have redirected its resources towards instead of the two Games?

RG: Affordable housing; reinstating the services cut since the bid; better transit options for gimps, including year long bus passes for all folks on welfare as well as disability benefits; expanded occupational therapy and home care; an end to the welfare time limits; dealing effectively with the ongoing fallout from Woodlands; more support staff at rehab centres; national accessibility standards like the Americans with Disabilities Act, but with accessible legal aid so that it’s actually available to those who need it the most; the list goes on and on and on. We need our services back, and we need them expanded!

To know more about Gimps Against the Games, check out the Facebook page: GAG